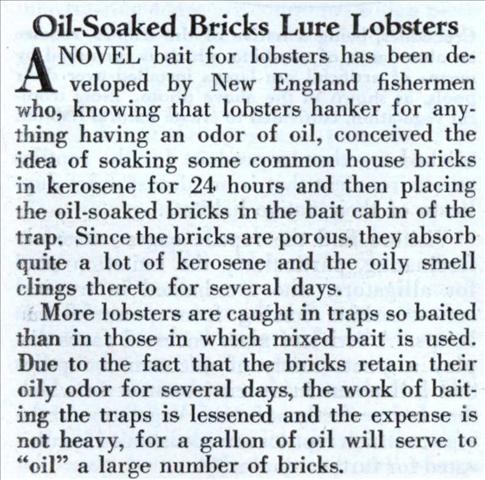 A NOVEL bait for lobsters has been developed by New England fishermen who, knowing that lobsters hanker for anything having an odor of oil, conceived the idea of soaking some common house bricks in kerosene for 24 hours and then placing the oil-soaked bricks in the bait cabin of the trap. Since the bricks are porous, they absorb quite a lot of kerosene and the oily smell clings thereto for several days.

More lobsters are caught in traps so baited than in those in which mixed bait is used. Due to the fact that the bricks retain their oily odor for several days, the work of baiting the traps is lessened and the expense is not heavy, for a gallon of oil will serve to “oil” a large number of bricks.