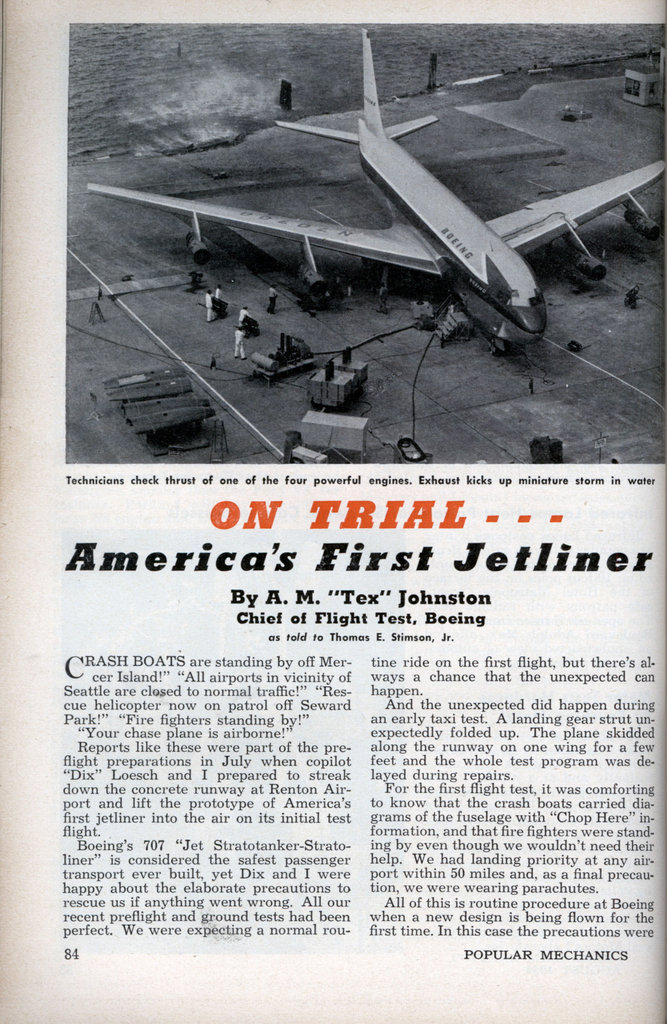 CRASH BOATS are standing by off Mercer Island!” “All airports in vicinity of Seattle are closed to normal traffic!” “Rescue helicopter now on patrol off Seward Park!” “Fire fighters standing by!” “Your chase plane is airborne!”

Reports like these were part of the pre-flight preparations in July when copilot “Dix” Loesch and I prepared to streak down the concrete runway at Renton Airport and lift the prototype of America’s first jetliner into the air on its initial test flight.

Boeing’s 707 “Jet Stratotanker-Strato-liner” is considered the safest passenger transport ever built, yet Dix and I were happy about the elaborate precautions to rescue us if anything went wrong. All our recent preflight and ground tests had been perfect. We were expecting a normal routine ride on the first flight, but there’s always a chance that the unexpected can happen.

And the unexpected did happen during an early taxi test. A landing gear strut unexpectedly folded up. The plane skidded along the runway on one wing for a few feet and the whole test program was delayed during repairs.

For the first flight test, it was comforting to know that the crash boats carried diagrams of the fuselage with “Chop Here” information, and that fire fighters were standing by even though we wouldn’t need their help. We had landing priority at any airport within 50 miles and, as a final precaution, we were wearing parachutes.

All of this is routine procedure at Boeing when a new design is being flown for the first time. In this case the precautions were more complete than usual, if possible, for our new plane is the pioneer American aircraft in the jet-powered passenger-transport field. Including engineering and research man-hours, this prototype was built at a cost of $15,000,000.

The 707 has a wingspan of 130 feet and is 128 feet long. It is smaller than a B-52 bomber and is larger, heavier and faster than the British Comet. It is a brand-new design with a striking sweptback wing. We are offering it to two different marketsâ€”to the Air Force as a jet-refueling tanker or for transport, and to the airlines as America’s first and the world’s best jet passenger transport.

As an airliner it will cruise at 40.000 feet at about 550 miles per hour, carrying you across the United States in about five hours. Westbound you’ll almost keep pace with the sun. Eastbound you’ll go from ocean to ocean in three hours if the pilot catches a lift on the high-speed jet stream high in the air.

The galley can be smaller than usual since there won’t be time to serve more than one meal per flight. Depending on seating arrangements, it will carry from 80 to 130 passengers.

The Jet Stratoliner is designed to combine the best features of both jet and piston-engine aircraft, something that seemed impossible in the past. It has the high speed and altitude capabilities of a jet plane and still has the good low-speed performance of piston-engine aircraft. It can climb out of a field as fast as most transports can cruise.

It can make a steep, slow approach for a landing, then brake to a minimum stop.

During the rest of this summer Dix Loesch and I will complete its Phase I testing. Among other things, this involves

proving its performance, stability and altitude capabilities. We will find out how closely it meets the specifications to which it was designed. Take-off and landing distances will be measured, as will its Mach number and indicated air-speed limitations. We’ll check flutter characteristics, if any, in all speed ranges and under all conditions of loading and centers of gravity. Fuel consumption under all conditions will be measured.

Probably we’ll find a few minor faults that are expected with any new design. We don’t anticipate any major troubles. In fact, part of our job is to prevent any major trouble from developing. An emergency in the air usually has a small beginning that multiplies itself. Finally the plane is in real trouble. It’s up to us to prevent any minor malfunction from building up into an emergency. We’ve worked up cockpit procedures for stopping or eliminating any adverse condition almost as soon as it starts.

Loesch and I spent more than 10 hours in the cockpit before the plane was first taxied. Part of the time we rehearsed the ordinary handling of the aircraft and the rest of the time was devoted to practicing emergency procedures. Normally, an engineer sits behind us at his panel. He’s part of the flight crew, but on the first flight we left him on the ground and swung his hinged panel around so we could read its dials simply by turning our heads.

During Phase I the aircraft carries a lot of instruments that automatically measure pressures, temperatures and other conditions at numerous locations. This information is transmitted to automatic recorders and cameras mounted in the fuselage. Phase II of the test program, which we’ll enter during the fall, is a development phase in which any changes that seem indicated are made and tested. We may find, for instance, that the rudder is larger than necessary. That would mean we are carrying weight that we don’t need so, during Phase II, a small rudder would be tested.

One of the reasons why the 707 is regarded as the safest transport ever built is its extreme simplicity. For one thing, much of the heavy, complicated and potentially dangerous apparatus that must be lugged around with piston engines is unnecessary with jets. We don’t have propellers and their complicated controls, we don’t need superchargers. All in all, our cockpit has about half as many controls and indicators as has a current piston-engine passenger liner.

Nor does the 707 require an independent pressurizing apparatus or a heating plant for cabin warmth and anti-icing. The needed hot air is bled directly from the compressors of a couple of the engines. It comes off at 700 degrees, in fact, and has to be cooled by a reduction turbine before it can be used.

Another thing we don’t need (and this may surprise you) is any fire-extinguishing apparatus for the engines. Each engine is carried in its own pod away from the wing. If an engine fire occurs, it takes less than a second to shut off the fuel, oil, hydraulic fluid and electricity. Then the fire blows itself out. It can’t keep on burning for there’s nothing left to support combustion. And the fire can’t get up into the wing. This plane, incidentally, can maintain altitude, loaded, on only two of its four power plants.

Here’s another thing that will surprise you. Big transports use power-boosted controls because no pilot is strong enough to manipulate the big control surfaces all by himself. But not on the 707. The plane is designed to handle with the same ease that you fly a three-place job manually. The secret is that the ailerons, rudder and elevators are equipped with small control tabs, similar to trim tabs, built into the trailing edges. The cockpit controls operate the tabs and the tabs in turn force the control surfaces in the desired direction. It’s an old principle that hadn’t been refined until recently, when the engineers learned how to balance the tabs and eliminate the flutter that characterized earlier designs.

If you look at the 707 wing you’ll see that the trailing edge has various control surfaces instead of simple ailerons and landing flaps. How these surfaces are used is still a company secret. They are part of the reason why we have take-off and approach performance that compares with piston-engine aircraft.

The 707 won’t need a drag chute to serve as a brake when landing, partly because its tricycle landing gear permits normal wheel braking as compared to the bicycle landing gear on our jet bombers. Each main gear has four rubber tires and the nose gear has two. giving a lot of “footprint” area that makes for good braking and distributes our heavy load so well that we can use existing airports.

Some air disasters have occurred in the past because of improper fuel-tank venting. Explosive fumes collected inside a wing structure and then were ignited when an adjacent electric switch produced an arc. A fire or explosion was bound to happen.

Authorities suspect that this has caused a number of unexplained crashes. This hazard is completely eliminated in the 707. You might say that the whole plane was built around its fuel tanks and their venting systems. Complete safety was the first stipulation. The main tanks are in the wings, integral with the structure. They are semipressurized with ram air to prevent the fuel from boiling during fast ascents to high altitudes. Vents are in the trailing edges, out near the wing tips. Wiring and all electrical apparatus are confined to a different zone in the wing, separated from the fuel-system areas.

Boeing has built more than 600 jet bombers, and all the experience gained in their construction is in the background of the new tanker-transport. But this is not a “warmed over” B-47 or B-52. Aside from its stock instruments and its crew seats and rudder pedals, every part of the 707 is new both in design and construction.

One trend evidenced by the 707 is its relatively stiff wing. Its tips come up only about a foot in flight, as compared to five or six times that deflection in our jet bombers. Perhaps you’ve noticed that the wings of a B-52 appear to droop while on the ground. They do, because of their flexibility. The wings become level when airborne. The stiffer 707 has a slight amount of positive dihedral, though this isn’t apparent on the ground.

Another trend found in the 707 is that its wing skin is quite highly stressed. The skin is thick and carries much of the load, while the spars inside are very light. We are approaching the time when internal spars will serve primarily as bracers to hold the upper and lower surfaces of the wing apart.

The 707 is designed to operate from present airports and to meet all present regulations governing civil air transport. It is expected to be as easy to maintain as our present airliners and imposes much less noise and vibration on its passengers. It will carry passengers at the same cost per seat-mile as do our present-day air transports.

This is the kind of airliner you’ll be riding in the future!