“But an unresponsive wife is more likely to be brought to the point of willing sexual surrender in one bed than in 2.” 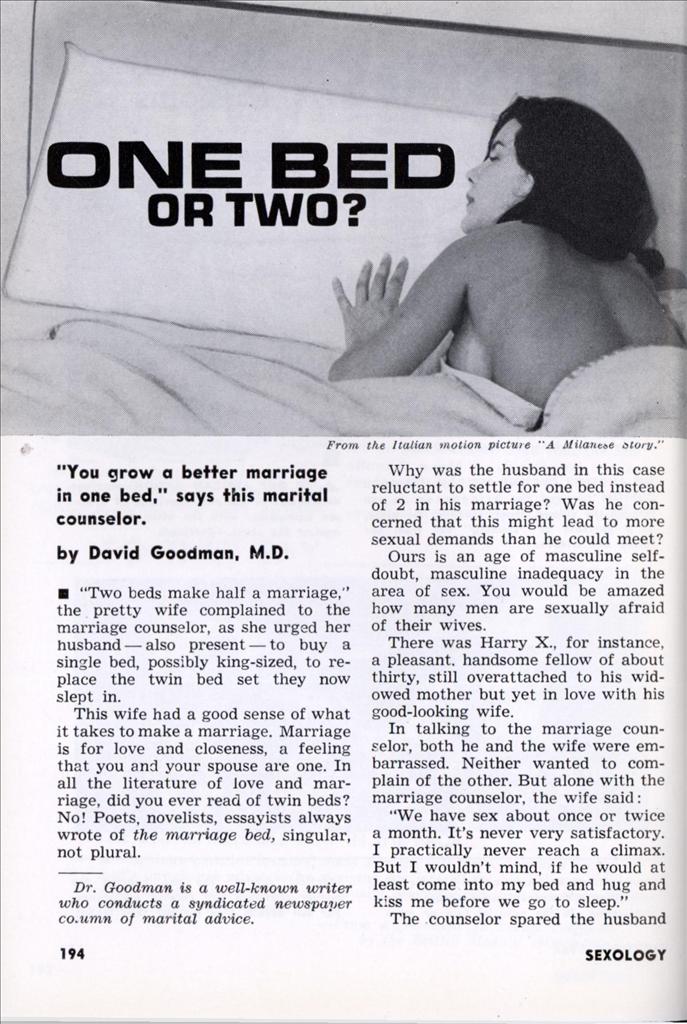 ONE BED OR TWO?

“You grow a better marriage in one bed,” says this marital counselor.

“Two beds make half a marriage,” the pretty wife complained to the marriage counselor, as she urged her husband — also present — to buy a single bed, possibly king-sized, to replace the twin bed set they now slept in.

This wife had a good sense of what it takes to make a marriage. Marriage is for love and closeness, a feeling that you and your spouse are one. In all the literature of love and marriage, did you ever read of twin beds? No! Poets, novelists, essayists always wrote of the marriage bed, singular, not plural.

Why was the husband in this case reluctant to settle for one bed instead of 2 in his marriage? Was he concerned that this might lead to more sexual demands than he could meet?

Ours is an age of masculine self-doubt, masculine inadequacy in the area of sex. You would be amazed how many men are sexually afraid of their wives.

There was Harry X., for instance, a pleasant, handsome fellow of about thirty, still overattached to his widowed mother but yet in love with his good-looking wife.

In talking to the marriage counselor, both he and the wife were embarrassed. Neither wanted to complain of the other. But alone with the marriage counselor, the wife said: “We have sex about once or twice a month. It’s never very satisfactory. I practically never reach a climax. But I wouldn’t mind, if he would at least come into my bed and hug and kiss me before we go to sleep.”

The counselor spared the husband the embarrassment of explaining why he didn’t go into his wife’s bed. The counselor knew the reason. He tactfully suggested that they buy a double bed.

They did. The marriage improved. The husband found himself desiring sex more often. The wife dropped the pout from her pretty face. The man was proud of having pleased his wife.

His libido turned more toward her; his emotional dependence on his mother lessened. Trading two beds for one was that first step needed for making a go of the marriage. Of course, further counseling in other areas was required to complete the cure.

Harry X. isn’t the only one. A great many men today are sick of soul because they feel inadequate as males. Only the male can be impotent. There is no greater grief.

Such husbands need to be told that they are more likely to make a go of love in one bed than in 2.

When a husband has doubts of his sexual adequacy, he hesitates to venture into his wife’s bed for fear that she may interpret this as a bid for sex. He is not sure that he really wants sex at this time, for fear that he may not be successful. So he stays in his own bed.

You don’t lose a race in which you have not entered; your ego is not hurt. But the marriage may be hurt. It may slowly die for lack of the proper romantic nourishment.

If the couple slept in one bed, the husband could express his affection for his wife through hugs and kisses without thinking that he necessarily had to follow through with sex. This would give her a lot of pleasure. Women don’t need sex so much as they need love.

However, the loving closeness might create a very real ardor in the husband. Now he does want to follow through with marital relations.

And now he is very likely to succeed in satisfying his wife. This gives him a great ego lift as a male. Of course it also makes his wife very happy. The marriage improves.

But it isn’t only the males in our society who are sexually inadequate. The number of sexually unresponsive women is appalling, some authorities putting the number as high as 40 per cent. The misery that frigidity of women causes in marriage is immeasurable. It is a common enough cause for divorce.

But an unresponsive wife is more likely to be brought to the point of willing sexual surrender in one bed than in 2. And certainly so, if she has a tender and warmhearted husband, who, balancing ardor with patience, nevertheless persists in ardor until he ultimately wins the response he is seeking.

There was Mary Y., for instance, a woman with a Botticelli face and a Rubens figure. She drove her husband mad by continually saying “no” to his bids for sex. She had insisted on twin beds from the start.

The cure for a frigid woman is— in many instances—a loving, truly masculine husband. Mary Y. had such a husband. He genuinely loved her. His sincere devotion in time broke her resistance to the marriage counselor’s suggestion that they turn in the twin beds for one double bed.

Here, too, the change from 2 beds to one was the turning point in the marriage counseling. As Mary expressed her fears of sex in talks to the counselor, she felt freer to turn to her husband for comfort—and in time — affection. Ultimately she accepted sex, too.

The patience of true love won its reward. Mary’s husband had a sex partner who gladly satisfied his needs, in fact responded with her own pleasure to the delights of love. The marriage bed was a haven of happiness for both of them.

The sexually inadequate male and the frigid wife may require real treatment. Their distress may be due to deep-seated emotional conflicts brought on by childhood sexual misadventures or by bad guidance. But the average poor marriage partner of either sex in time finds that a loving closeness breaks the ice and makes both husband and wife more willing to surrender to the joys of love.

I would particularly like to warn older couples who have started their marriage in one bed not to be tempted to turn it in for twin beds, unless personality or health requirements dictate such a choice.

Sure, one of you may have developed into something of a restless sleeper, and maybe the other snores a bit. These are not good reasons for giving up the comforting feeling of nearness and oneness that only sleeping together can give.

Certainly the practice of moving into separate rooms is a dangerous one. First thing you know you’re little more than strangers to each other, and just in the years that you most need love and companionship.

The discerning eye sees many examples of these sexually dead older people — who gradually undergo a general hardening of the emotions. They sit opposite each other at the dinner table like two pillars of stone. If they speak at all, it is angrily, each one trying to preserve his own personality in the face of the other’s shrill attacks.

Not so the truly loving older couple. Some continue sex to a great old age. But even without sex they draw comfort from sleeping together. If one has a troubled dream, he turns to the other. In a mutual embrace the memory of the bad dream passes.

If the night turns cold, they put back to back and warm each other. It’s nice, really nice, to live this way.

When young people marry and begin to plan for the furniture for their new home, they may be tempted by the “arty” and artful furniture salesman to believe that two beds are more “refined” than one, that they are the choice of the socially elite, that the better hotels furnish all their higher priced suites with twin beds.

This is pure commercial blarney. Two beds bring more money than one, whether in the furniture store or in the hotel. Cupid’s true followers, however, most often sleep in one bed.

Twin beds can be a marriage hazard. You grow a better marriage in one bed.

Dr. Goodman is a well-known writer who conducts a syndicated newspaper column of marital advice.