Modern Mechanix
Issue: May, 1929
Posted in: General
Tags: business opportunity, careers, editorial
No Comments on Opportunity and You (May, 1929) 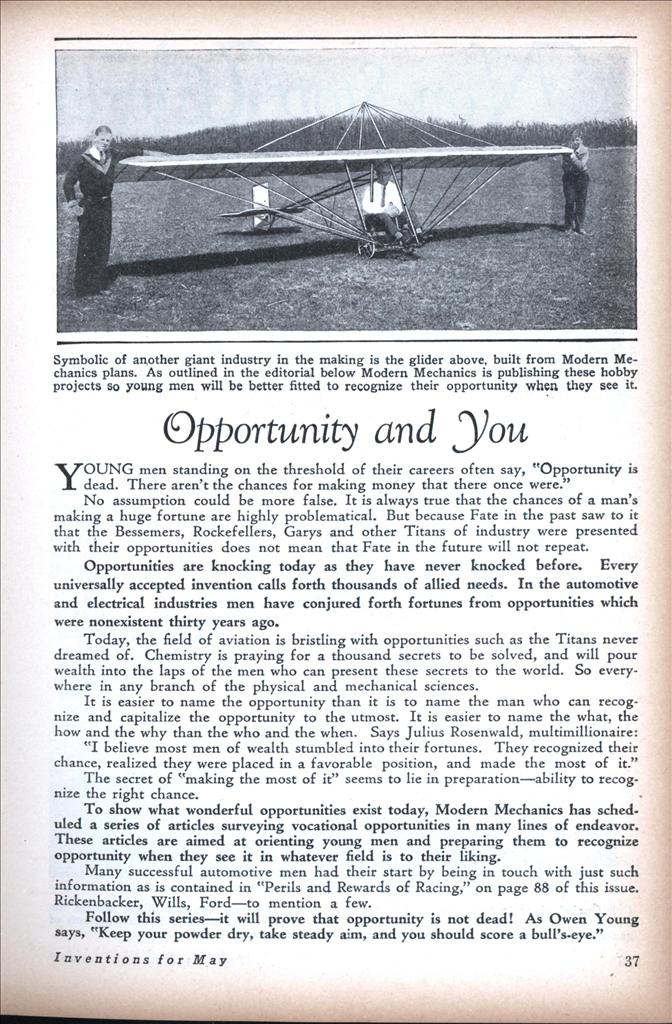 YOUNG men standing on the threshold of their careers often say, “Opportunity is dead. There aren’t the chances for making money that there once were.” No assumption could be more false. It is always true that the chances of a man’s making a huge fortune are highly problematical. But because Fate in the past saw to it that the Bessemers, Rockefellers, Garys and other Titans of industry were presented with their opportunities does not mean that Fate in the future will not repeat.

Opportunities are knocking today as they have never knocked before. Every universally accepted invention calls forth thousands of allied needs. In the automotive and electrical industries men have conjured forth fortunes from opportunities which were nonexistent thirty years ago.

Today, the field of aviation is bristling with opportunities such as the Titans never dreamed of. Chemistry is praying for a thousand secrets to be solved, and will pour wealth into the laps of the men who can present these secrets to the world. So everywhere in any branch of the physical and mechanical sciences.

The secret of “making the most of it” seems to lie in preparation—ability to recognize the right chance.

To show what wonderful opportunities exist today, Modern Mechanics has scheduled a series of articles surveying vocational opportunities in many lines of endeavor. These articles are aimed at orienting young men and preparing them to recognize opportunity when they see it in whatever field is to their liking.

Many successful automotive men had their start by being in touch with just such information as is contained in “Perils and Rewards of Racing,” on page 88 of this issue. Rickenbacker, Wills, Ford—to mention a few.

Follow this series—it will prove that opportunity is not dead! As Owen Young says, “Keep your powder dry, take steady aim, and you should score a bull’s-eye.”