Mechanix Illustrated
Issue: Nov, 1950
Posted in: Animals For Profit, How to
1 Comment on our business is GOING TO THE DOGS (Nov, 1950) 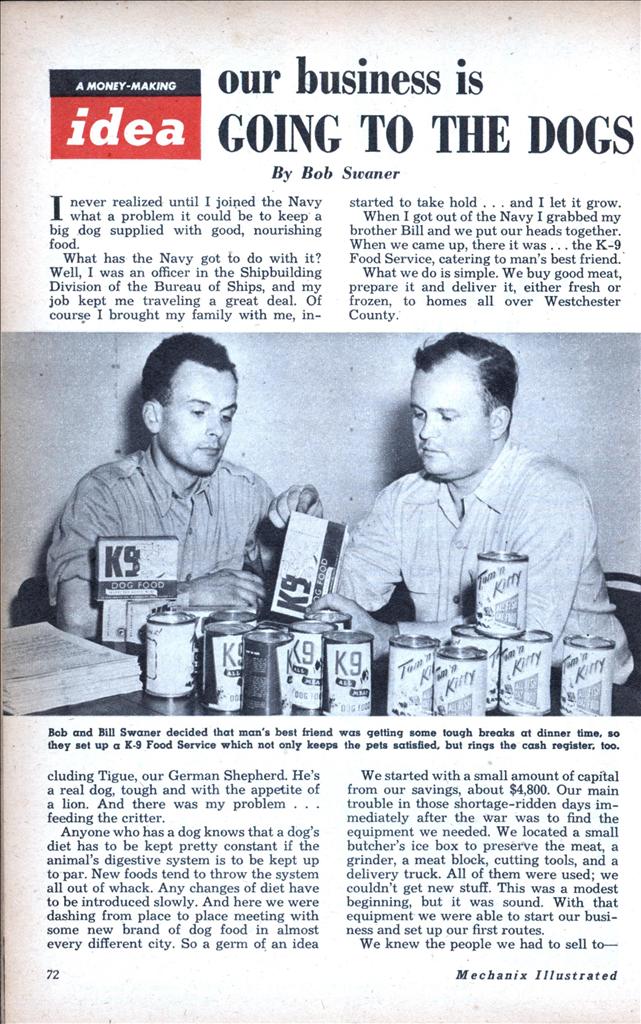 our business is GOING TO THE DOGS

I never realized until I joined the Navy what a problem it could be to keep a big dog supplied with good, nourishing food.

What has the Navy got to do with it? Well, I was an officer in the Shipbuilding Division of the Bureau of Ships, and my job kept me traveling a great deal. Of course I brought my family with me, including Tigue, our German Shepherd. He’s a real dog, tough and with the appetite of a lion. And there was my problem… feeding the critter.

Anyone who has a dog knows that a dog’s diet has to be kept pretty constant if the animal’s digestive system is to be kept up to par. New foods tend to throw the system all out of whack. Any changes of diet have to be introduced slowly. And here we were dashing from place to place meeting with some new brand of dog food in almost every different city. So a germ of an idea started to take hold… and I let it grow.

When I got out of the Navy I grabbed my brother Bill and we put our heads together. When we came up, there it was … the K-9 Food Service, catering to man’s best friend.

What we do is simple. We buy good meat, prepare it and deliver it, either fresh or frozen, to homes all over Westchester County.

We started with a small amount of capital from our savings, about $4,800. Our main trouble in those shortage-ridden days immediately after the war was to find the equipment we needed. We located a small butcher’s ice box to preserve the meat, a grinder, a meat block, cutting tools, and a delivery truck. All of them were used; we couldn’t get new stuff. This was a modest beginning, but it was sound. With that equipment we were able to start our business and set up our first routes.

We knew the people we had to sell to— dog owners. The first thing we did was to get a list of them from the license clerks in town and city halls in our area. Next we sent these people a circularized inquiry. We simply asked whether they would be interested in having fresh, government-inspected meat for their dogs delivered regularly at super-market prices. In other words, we had two appeals: economy and service. This was no frenzied sales appeal, but it was immediately plain that we were offering to fill a genuine need. The response was astonishing. Most direct mail campaigns are considered good if they draw as , much as two per cent in replies. We got nearly forty. There was no question but that our idea was sound.

We used personal canvassing, too, to find customers. Once a customer placed his order with us, his worries about feeding his pet were over; our truck delivered his dog’s food as often as twice a week if he wished.

Our first two years were the tough ones. We were getting business, but we needed more, for volume is required to furnish a real income. During those first years we slaved long hours. We had to do everything ourselves. We had to buy our meats, prepare them, deliver them to our customers and drum up new business. We worked out a lot of good selling techniques. Contacts with veterinarians and kennels were found particularly valuable. We sold to these at our regular prices, and they were so well satisfied that they sent us customers from their clients.

As we increased our business we began to expand. Our first expansion was financed by a G.I. loan, but once we really got rolling, we were able to finance all additional items from our profits.

Today, after five years in business, we have eight trucks, employ thirteen men besides ourselves, and feed more than 4,000 dogs. With new customers being added every month, we feel that we are far from the end of our expansion.

We buy only U. S. Government-inspected meat. The beef we get from the regular packers, and the horse meat comes from special horse meat packing houses. The meat is delivered boned, and we place it in the first cooler on hooks suspended from steel tracks overhead. It is put in through one door, and taken out through an exit door on the opposite end. As additional deliveries are made, the meat already in the cooler naturally is pushed back toward the exit door from which it is to be taken for .processing. This insures that the oldest meat (and we make certain we never have it more than three days) is used first.

We also sell a number of well-known standard brands of dog food, both dry and canned, including biscuits, meal, and so on.

We have just started a new promotion piece, a monthly bulletin which we call the “Growl.” It contains news of dog shows, articles on canine nutrition and other items of general interest to dog lovers.

Our business has its hazards, too. Every once in a while a route salesman will get bitten. To avoid trouble our men must know each one of their “customers” intimately.

For example, our route salesmen know all about Peter. He’s a huge St. Bernard. He never molests anyone approaching his house, but there’s only one way to leave! The salesman must put down his hand. Peter takes it in his mouth and gravely, gently escorts him to the gate. It’s the only way to deal with two hundred pounds of dog.

There are many areas in the United States which can make good locations for dog-food services. Conservative estimates of the canine population of the United States range between 17 and 20 million. That’s a lot of dogs, and they eat a lot of dog food. Try it with our blessing. We’re going to the dogs in Westchester, and have enough on our hands.