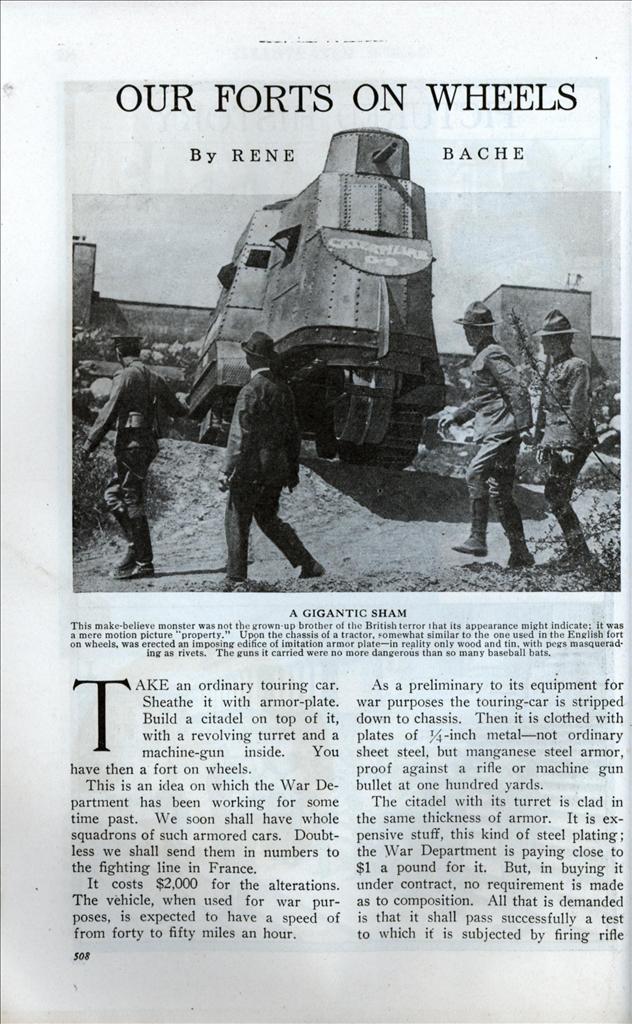 OUR FORTS ON WHEELS

TAKE an ordinary touring car. Sheathe it with armor-plate. Build a citadel on top of it, with a revolving turret and a machine-gun inside. You have then a fort on wheels.

This is an idea on which the War Department has been working for some time past. We soon shall have whole squadrons of such armored cars. Doubtless we shall send them in numbers to the fighting line in France.

It costs $2,000 for the alterations. The vehicle, when used for war purposes, is expected to have a speed of from forty to fifty miles an hour.

As a preliminary to its equipment for war purposes the touring-car is stripped clown to chassis. Then it is clothed with plates of ^-inch metal—not ordinary sheet steel, but manganese steel armor, proof against a rifle or machine gun bullet at one hundred yards.

The citadel with its turret is clad in the same thickness of armor. It is expensive stuff, this kind of steel plating; the War Department is paying close to $1 a pound for it. But, in buying it under contract, no requirement is made as to composition. All that is demanded is that it shall pass successfully a test to which it is subjected by firing rifle bullets at it. If, at one hundred yards, it stops the bullets, it is accepted; otherwise, not.

A converted automobile of this description is reinforced to some extent, the strength of many parts being increased to enable them to withstand nearly double the stress of peace service.

The War Department has contracted, also, for the quick delivery of great numbers of armored cars, built for fighting purposes from the ground up. These are quite a different proposition. They are true automobile forts, completely clad in quarter-inch steel plate, and mounted on the chassis of a truck.

There is—as in the other case—a revolving turret on top. At one side is a steel door, for entrance and exit. In front of the driver’s seat is a steel shutter, which can be lifted to enable him to look out. The gasoline tank is be- neath the vehicle. The machine carries three men, the driver, a, gunner and an assistant gunner. A traveling fort of this pattern can “do” about twenty-five miles an hour only.

Such an armored motor-car costs $5,000. There is, however, a larger and more formidable type, costing $8,000, which has two turrets, providing for two machine-guns, and carrying a “crew” of five or six. The front turret is higher than the rear turret, so that the gunner inside of it can fire over the after turret if there is occasion so to do—as, for instance, while running away from a pursuing enemy.

The mechanism of this superior type of fort on wheels is so modified that power is applied to all four of the wheels. Thus it is enabled to run over much rougher ground than would be practicable otherwise.

The newest wheeled forts of this description have a second steel shutter at the back, with a rear seat for the driver. This provision is made in order that the vehicle, if desired, may be driven rear end first. In fact, one of the most important advantages of this type of armored motor is that it can run backward as readily as forward, and at an equal speed. It is, in effect, a “double-ender”—a great convenience in an emergency, when it may not be easy or safe to negotiate a turnabout.

Attached by straps to the rear end of each fort are a pickaxe, an axe, and a spade-shovel, which, if the military motor happens to get stuck in the mud, can be used to dig it out. There is also a lantern, set inside of an armor-plate bucket that is riveted to one of the steel plates at the back.

In the present war the fort car has proved a most valuable fighting auxiliary, being utilized to advantage in a great variety of ways. Being proof against anything but artillery, it ventures boldly into the zone of rifle and machine gun fire. Its occupants are safe against “snipers,” and it can run fearlessly through the streets of villages in which enemy groups are hiding in cellars and behind walls. In a retreat, it can linger as the “point” of the rear guard and retard the progress of an advancing foe. If Napoleon had possessed a bare half dozen of these machines, his retreat from Russia could have been accomplished with a loss of not over one thousand men. Even today, when means of attacking such monsters are tremendously better, they still are vitally important, as the British troops have proved. Also, just as these machines are used in the rear guard, they can be used in advance guard formation. The usual custom has been for the soldier in hot fighting to be nothing more or less than a free target for the enemy’s fire. In case he came upon a detachment of the enemy, he was almost certain to be killed. The tank or armed fort is to change this, however.