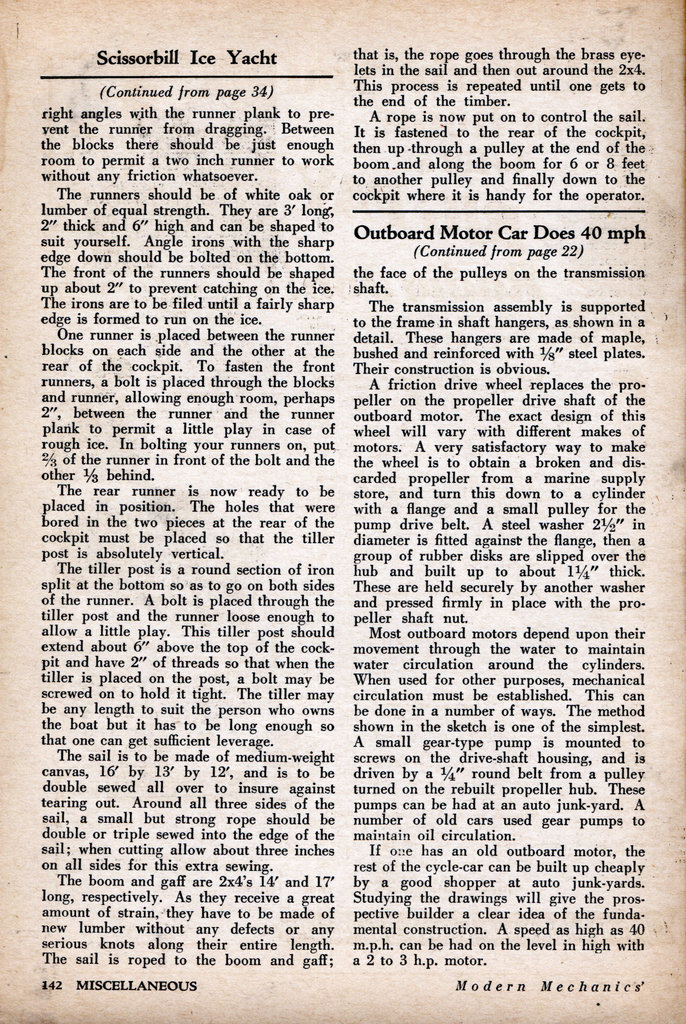 A junked outboard motor makes an excellent power plant for a cycle car when converted as described here by Mr. Cole. The little car will develop speeds up to 40 miles an hour, and has power to burn.

TO BE the possessor of a self-propelled vehicle is the ambition of every normal boy. Every father has heard the plea of his son when out in the country in the family car: “Gee, Dad! Lem’me drive, will you? Please! I know how! Honest I do! Lem’me show you. Please, Dad, come on!”

My boy had just reached that stageâ€” only more so. He begged me to build him some kind of vehicle that would “run by itself.” Since I like to putter around and make thingsâ€”particularly something different from the other fellowâ€”I gave ear to his pleadings, and began to think the matter over.

An electrically driven car suggested itself, but nothing less than a 32-volt motor would be satisfactory, and the batteries for 32 volts would be heavy and make the car cumbersome to handle.

An idea! Tucked away in a corner of my garage was an out-of-date light-twin outboard motor. It was out-of-date only because it lacked the power of its present-day cousins. Nowadays an outboard under 10 h.p. is strictly passe in water motoring circles, so the little “putt-putt” had been retired from active service. Why not drive a cycle-car with the outboard motor? The idea took tangible form and developed. The ultimate result was a practical and dependable miniature motor vehicle. So dependable, in fact, that “the boy” ventures far from home with itâ€”used it on a two weeks’ camping vacationâ€”and delights in climbing all the hills in the vicinity-â€”and there are some hills.

The drawing shows the plan and elevation of the unique car. The sketches are not offered as detail construction drawings that the prospective builder must conform to, but rather to show the general outlines of such a car, and to illustrate the means by which the outboard power is converted to traction use.

In building an outboard cycle-car, the design of the chassis depends upon what material is available to the builder. To lay down exacting specifications might run up the cost beyond a reasonable amount.

The first thing to do is to build a substantial chassis with a 72″ wheel-base and a 30″ tread. For the frame rails, 1-1/4″x 2″ oak or ash is recommended. Old auto spring leaves from a junk-yard will afford spring suspension. Single master leaves are sometimes sufficient for each cycle-car spring. Old motorcycle wheels are especially good. Ordinary bicycle wheels can be used, or strongly constructed baby-carriage wheels. The wheels should be not less than 20″ in diameter.

To the rear wheels are bolted double-faced pulleys to receive 1″ flat belts. These pulleys should be of such diameter as to give respectively 6 to 1 and 3 to 1 gear ratios between the driving and the driven pulleys. These pulleys can be turned from -maple, preferably laminated, or a sheet metal worker can spin them. The method of attaching them to the wheels depends upon the style of wheels. The constructor must decide this for himself.

Suitable steering gear must be installed and be mounted so that the steering column will not interfere with an outboard motor set vertically on the centerline of the chassis. At a point a little ahead of the middle of the chassis, a transverse board is securely mounted across the frame and tilted forward about 60Â°. This serves as a mounting for the outboard motor the same as the transom of a boat.

An old Ford radiator or any other small car radiator, acquired cheaply at an auto-wrecking yard, is mounted on the front of the chassis. Provision must be made for water circulation, but the detail of this will be taken up later.

We now come to the very essential unit of the cycle carâ€”the transmission. A second drawing shows this in detail. The drawings are practically self-explanatory. The main shaft is of 3/4″ cold-rolled rod. One friction disk is secured rigidly to this shaft. The other disk is locked to a tubular shaft made of 1″ iron pipe which turns on the main shaft and also in its own shaft hanger. Anyone with a home workshop lathe can turn out the friction disks and the drive pulleys. The bushings and the thrust bearings can be picked up in an auto junk-yard for a few cents. Front wheel bearings from an old model Ford will serve as suitable thrust bearings. Stiff valve springs from a scrapped heavy-duty motor will serve as tension springs against the friction disks. Provision must be made for oiling all the bearings.

It is necessary that the friction disks be spread apart to permit the entry of the friction drive-wheel between them. This is done by turning two end cams against each other, as shown in detail. One cam is held stationary by attaching its lever to a rigid part of the car. The other is turned against it by depressing the left foot pedal. The right pedal contracts a brake-band around the face of the pulleys on the transmission shaft..

The transmission assembly is supported to the frame in shaft hangers, as shown in a detail. These hangers are made of maple, bushed and reinforced with 1/8″ steel plates. Their construction is obvious.

A friction drive wheel replaces the propeller on the propeller drive shaft of the outboard motor. The exact design of this wheel will vary with different makes of motors. A very satisfactory way to make the wheel is to obtain a broken and discarded propeller from a marine supply store, and turn this down to a cylinder with a flange and a small pulley for the pump drive belt. A steel washer 2-1/2 ” in diameter is fitted against the flange, then a group of rubber disks are slipped over the hub and built up to about 1-1/4″ thick. These are held securely by another washer and pressed firmly in place with the propeller shaft nut.

Most outboard motors depend upon their movement through the water to maintain water circulation around the cylinders. When used for other purposes, mechanical circulation must be established. This can be done in a number of ways. The method shown in the sketch is one of the simplest. A small gear-type pump is mounted to screws on the drive-shaft housing, and is driven by a 1/4″ round belt from a pulley turned on the rebuilt propeller hub. These pumps can be had at an auto junk-yard. A number of old cars used gear pumps to maintain oil circulation.

If one has an old outboard motor, the rest of the cycle-car can be built up cheaply ‘ by a good shopper at auto junk-yards. Studying the drawings will give the prospective builder a clear idea of the fundamental construction. A speed as high as 40 m.p.h. can be had on the level in high with a 2 to 3 h.p. motor.