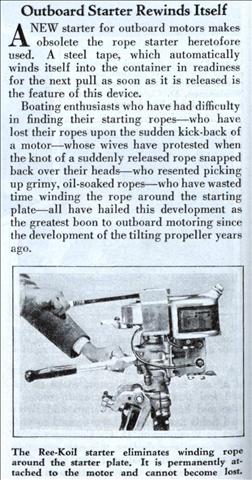 A NEW starter for outboard motors makes obsolete the rope starter heretofore used. A steel tape, which automatically winds itself into the container in readiness for the next pull as soon as it is released is the feature of this device.

Boating enthusiasts who have had difficulty in finding their starting ropes—who have lost their ropes upon the sudden kick-back of a motor—whose wives have protested when the knot of a suddenly released rope snapped back over their heads—who resented picking up grimy, oil-soaked ropes—who have wasted time winding the rope around the starting plate—all have hailed this development as the greatest boon to outboard motoring since the development of the tilting propeller years ago.