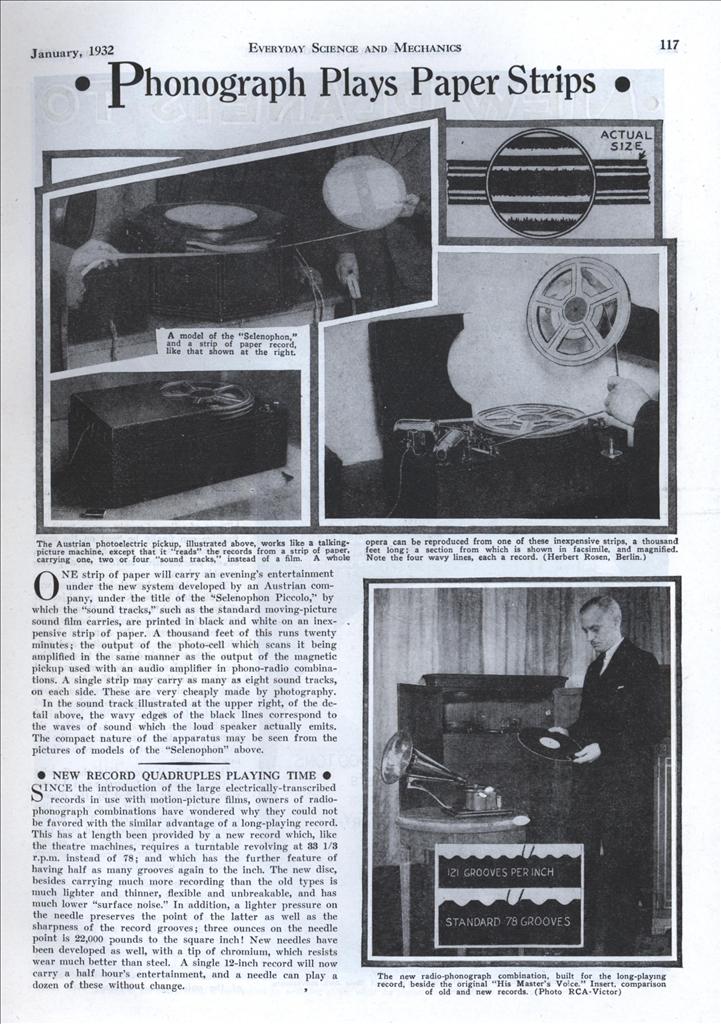 ONE strip of paper will carry an evening’s entertainment under the new system developed by an Austrian company, under the title of the “Selenophon Piccolo,” by which the “sound tracks,” such as the standard moving-picture sound film carries, are printed in black and white on an inexpensive strip of paper. A thousand feet of this runs twenty minutes; the output of the photo-cell which scans it being amplified in the same manner as the output of the magnetic pickup used with an audio amplifier in phono-radio combinations. A single strip may carry as many as eight sound tracks, on each side. These are very cheaply made by photography.

In the sound track illustrated at the upper right, of the detail above, the wavy edges of the black lines correspond to the waves of sound which the loud speaker actually emits. The compact nature of the apparatus may be seen from the pictures of models of the “Selenophon” above.

Since, the introduction of the large electrically-transcribed records in use with motion-picture films, owners of radio-phonograph combinations have wondered why they could not be favored with the similar advantage of a long-playing record. This has at length been provided by a new record which, like the theatre machines, requires a turntable revolving at 33 1/3 r.p.m, instead of 78; and which has the further feature of having half as many grooves again to the inch. The new disc, besides carrying much more recording than the old types is much lighter and thinner, flexible and unbreakable, and has much lower “surface noise.” In addition, a lighter pressure on the needle preserves the point of the latter as well as the sharpness of the record grooves; three ounces on the needle point is 22,000 pounds to the square inch! New needles have been developed as well, with a tip of chromium, which resists wear much better than steel. A single 12-inch record will now carry a half hour’s entertainment, and a needle can play a dozen of these without change.