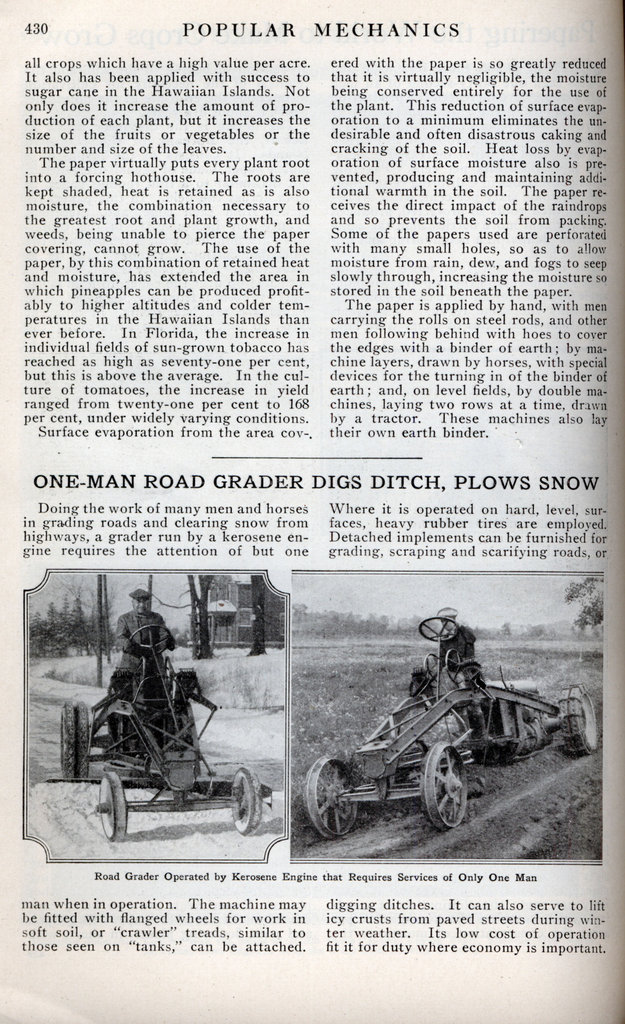 STRIPS of paper, three feet wide and less than one thirty-second of an inch in thickness, have increased the production of pineapples in the Hawaiian Islands by more than forty per cent. Laid in a field of sun-grown Sumatra tobacco, in Florida, the same kind of paper increased production more than fifty per cent. Papering fields of tomatoes in California raised their yield by some sixty per cent, while strawberries, their roots so protected, produced forty per cent more berries than the same varieties planted in a neighboring and un-papered field.

For fifteen months or more, prior to 1923, experiments in the papering of pineapple fields in Hawaii were carried on with uniformly the same results. This year, more than 4,250 miles of paper were laid, at a cost of approximately $250,000, on the pineapple plantations of Hawaii. The result is an increase of from twenty-five to sixty per cent in the production of the pineapple plants, an average of at least forty per cent; the elimination of weeding, which costs on the average $45 per acre; the conservation of moisture; the prevention of baking of the soil, and the removal of the necessity for cultivation throughout the crop life of the pineapple, which is about five years.

The device is the discovery of C. F. Eckart, the Burbank of the Hawaiian Islands. It consists of the laying of a mulch paper, made of asphalt-treated felt, not dissimilar to a thin roofing paper, in rows across the field. In this paper, six inches from each edge, and, therefore, twenty-four inches apart in the center, holes are punched with a trowel, and the pineapple cuttings, “ratoons,” are set in these holes. As the paper is laid, the earth is turned up over, the edges, to hold it flat and to prevent it from blowing away. The plants are set “staggering” in adjacent lines, so that while the rows along the paper are even, those across the field are not.

The same method used in the planting -of the pineapples is adopted in the setting out of tobacco, tomato, cabbage or other plants. Experiments are now being conducted on the use of the paper with grapes, and with flowering plants, in short, with all crops which have a high value per acre. It also has been applied with success to sugar cane in the Hawaiian Islands. Not only does it increase the amount of production of each plant, but it increases the size of the fruits or vegetables or the number and size of the leaves.

The paper virtually puts every plant root into a forcing hothouse. The roots are kept shaded, heat is retained as is also moisture, the combination necessary to the greatest root and plant growth, and weeds, being unable to pierce the paper covering, cannot grow. The use of the paper, by this combination of retained heat and moisture, has extended the area in which pineapples can be produced profitably to higher altitudes and colder temperatures in the Hawaiian Islands than ever before. In Florida, the increase in individual fields of sun-grown tobacco has reached as high as seventy-one per cent, but this is above the average. In the culture of tomatoes, the increase in yield ranged from twenty-one per cent to 168 per cent, under widely varying conditions.

Surface evaporation from the area cov ered with the paper is so greatly reduced that it is virtually negligible, the moisture being conserved entirely for the use of the plant. This reduction of surface evaporation to a minimum eliminates the undesirable and often disastrous caking and cracking of the soil. Heat loss by evaporation of surface moisture also is prevented, producing and maintaining additional warmth in the soil. The paper receives the direct impact of the raindrops and so prevents the soil from packing. Some of the papers used are perforated with many small holes, so as to allow moisture from rain, dew, and fogs to seep slowly through, increasing the moisture so stored in the soil beneath the paper.

The paper is applied by hand, with men carrying the rolls on steel rods, and other men following behind with hoes to cover the edges with a binder of earth; by machine layers, drawn by horses, with special devices for the turning in of the binder of earth ; and, on level fields, by double machines, laying two rows at a time, drawn by a tractor. These machines also lay their own earth binder.