What’s up with the flying girder on the second page? Is Superman trying to save New York? 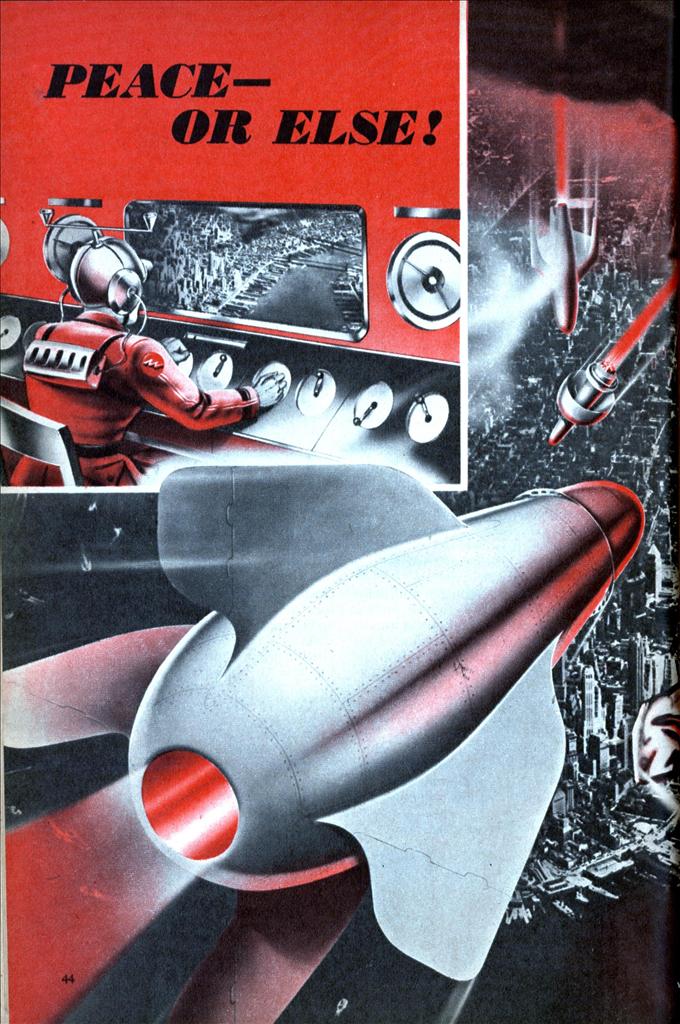 HUMANITY is faced with the greatest decision it has ever had to make. The atomic bomb, in three gigantic, flashes, has transformed our planet into a world which has only one choice left. Earth has become a world of Either/Or.

Either—we are firmly determined that there shall be no war, and spend as much energy, thought and money on the problem of preventing it as we now spend in preparing for it. In that case—and if we succeed—the future promises a period of incredible achievements, of unlimited progress, of infinite riches of knowledge and material riches, of immediate preliminaries to humanity’s spread through the solar system as a first step to a spread through the galaxy.

Or—we blunder into irretrievable errors, such as trying to outlaw atomic energy, or believing that size and distance will save us, or thinking that there can be war only between other nations.

If we choose the latter course, we will almost inevitably become involved in another war—an atomic war. …

Atomic war will come without warning and without declaration, with a fury so monstrous that the mind cannot conceive it. The first authentic publication on the subject, the report written for the War Department by Professor H. D. Smyth, (Atomic Energy for Military Purposes), has already pointed out that the atomic bomb is especially suited to sudden, unannounced attack—blitzkrieg to make the Nazis’ version of it pale into insignificance. “A country’s major cities might be destroyed overnight by an ostensibly friendly power,” as Professor Smyth puts it. Overnight destruction of America’s major cities means the death of eighty million people in twelve hours— 57% of the population! That is, tragically for us, not a nightmare, but a very definite possibility.

The possibility can in no way be done away with by preventing potential aggressors from obtaining the “secret.” Several nations stood on the threshold of atomic energy when the war started: we barely won the race. Within five years} every nation will be able to construct atomic bombs, even though they will not be able to keep that fact secret. The prevention of war, therefore, is not a scientific problem—it is a political problem. Of course, destruction would be mutual. The Intelligence Service would know that war was brewing, and the military could get ready to hit back. The result would be destruction of all the centers of population and manufacture of all the belligerents, with nothing left after two days of war but small and unimportant villages and only about one-quarter or one-third of the populations of the warring nations still alive. It is a prospect so incredible that the mind rejects it, but in order to understand it clearly we must try to visualize the details. For that purpose we must understand a few pertinent facts about the atomic bombs which have been used. The atomic bomb has a mimimum size. It has been officially declared that the two bombs dropped on Hiroshima and Nagasaki were just about as small as they could be made. The destruction achieved in Japan is, therefore, the minimum destruction possible. British sources claim that these bombs weighed about 400 pounds, most of which was not the atomic explosive, but the mechanism required to make it safe in handling and to set it off. Furthermore—the bombs were set off in the air. The deaths of 100,000 Japanese in five microseconds was, therefore, the gentlest possible application of the smallest possible atomic bomb.

Our purpose was to put a stop to the face-saving, delaying tactics of an already-defeated enemy, but a future aggressor would aim at maximum destruction of life and property. He would use bigger bombs, and he would not use them relatively gently in the air to avoid both dangerous after-radioactivity in the ground and earthquakes: he would want the reverberations of earthquakes which might be set off by atomic blasts on, or in, the ground; and he would have no reason to avoid post-explosion radioactivity.

Size and weight of the bomb determines its use.

Airplanes, at first glance, appear to be the most obvious method of transporting bombs to target. Anything from a fighter bomber up can carry them. They cannot be used in projectiles, either because the projectile is too small, or because, if large enough, the firing battery would be within the destructive range of its own bombs. Only the primary turrets of battleships would have the necessary size and range, provided that the fuze mechanism of the bomb could be shot from a gun.

But guns will be of little use in an atomic war.

If the air defense is too violent, there are the German V-weapons. Of course, radar-equipped A.A. batteries shot them down in droves—but the A.A. battery which shoots down a V-1 flying bomb with an atomic warhead, cruising at an altitude of a few thousand feet, will never fire a shot again: it will be vaporized. Those V-1’s which got past the A.A. batteries were taken care of by fighter planes. Londoners, in spite of strict orders, used to stand on the rooftops and watch, cheering if a fighter pilot exploded a V-1 in midair.

But if the warheads had been atomic, there would no longer have been a London after three such “successful” exploits. Furthermore, the V-1 of the future will not be the clumsy robot which could fly only in a straight line at a set altitude. Since far fewer would be needed, they could be highly developed and expensive jet-propelled planes, without pilots, but with television sets, guided by means of television screens placed underground and well camouflaged in the aggressor’s base.

Still, theoretically you might cope with airborne atomic bombs if carried by aircraft or by robot planes. Here it is still a question of distance: robot fighters, also guided by television, and robot A.A. batteries might explode them some fifty miles from the city limits. The great difference is that only o?ic need get through. In World War II, London absorbed some 2000 robot bombs that got through, and continued to live and work.

But there is V-2, the long-distance rocket, against which there is no known defense. Couple V-2 and the atomic bomb (it can be done today) and you have a destroyer of cities against which there is no defense once the rocket is in the stratosphere. (It can be disturbed at take-off.) And if the long distance rocket can be equipped also with an atomic drive instead of a chemical, liquid-fuel, rocket motor, it can reach any point on earth from any other point on earth. It seems fairly certain now that V-2 was actually a part of the German atomic program; the rockets were finished in time, but the atomic bombs were not.

But there is no need to elaborate on the subject of atomic destruction. Future war is almost certain to be a sudden assault from a nation which is not openly hostile. There will be traffic and exchange of goods with that nation up until the very moment the bombs fall. It is all too probable that a potential enemy will be able to ship atomic bombs into a country with trained agents, store them in a corner of a commercial warehouse or in the basement of a private house rented for that purpose, bury them under the slagheaps of an industrial town—and set them off when ready.

At this moment of history, science does not know any counter measure whatever against atomic explosives.

Some writers have thought of a kind of force field into which no atomic explosive could be brought without being instantly exploded. But there are drawbacks to that idea. The most important is that such a field still has to be invented. If it were to be invented years from now, it might be highly dangerous to turn it on. If it were to be invented soon, it would also prevent the existence of atomic industries. To say that it should be used in such a way that it affects only quantities approaching critical mass is absolutely no solution, even if that restriction could be applied. The simple pieces of Plutonium in an atomic bomb are all below critical mass until the bomb is ready for explosion.

To find out about them we need nuclear research, the more the better; it is the only possible source of information. But quite aside from scientific research, we need to realize that a new era in human relations is here, an era that no longer permits the concept of war which now means complete, mutual, atomic destruction. What we have to learn is to live with atomic energy!