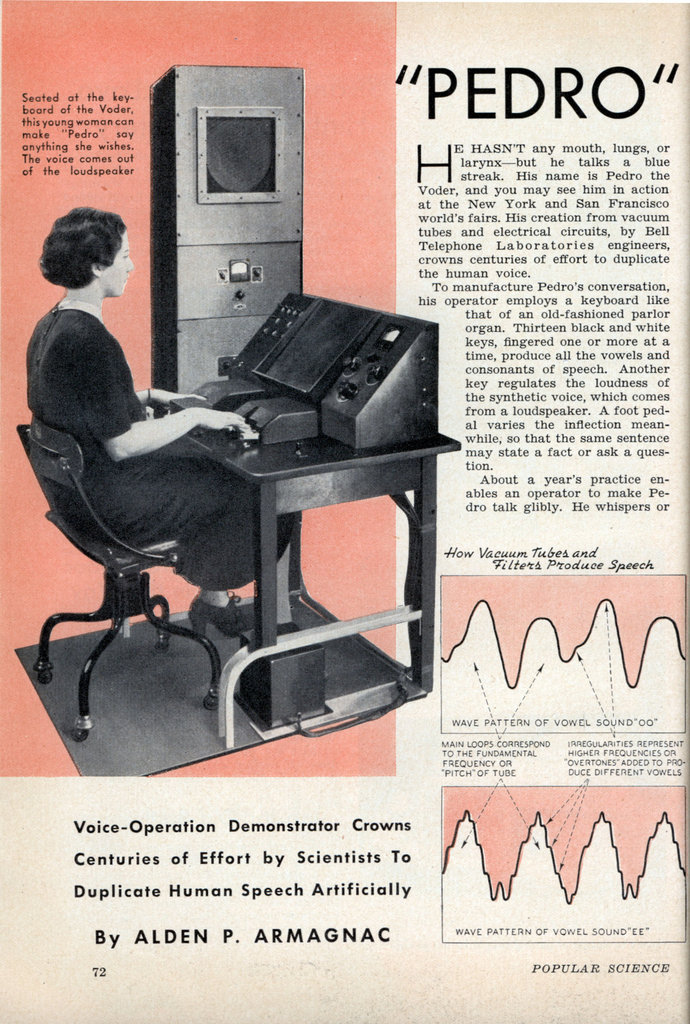 HE HASN’T any mouth, lungs, or larynx-but he talks a blue streak. His name is Pedro the Voder, and you may see him in action at the New York and San Francisco world’s fairs. His creation from vacuum tubes and electrical circuits, by Bell Telephone Laboratories engineers, crowns centuries of effort to duplicate the human voice.

To manufacture Pedro’s conversation, his operator employs a keyboard like that of an old-fashioned parlor organ. Thirteen black and white keys, fingered one or more at a time, produce all the vowels and consonants of speech. Another key regulates the loudness of the synthetic voice, which comes from a loudspeaker. A foot pedal varies the inflection meanwhile; so that the same sentence may state a fact or ask a question.

About a year’s practice enables an operator to make Pedro talk glibly. He whispers or shouts, speaks with the voice of a man, woman, or child, and converses intelligibly in any language, despite his slight electrical accent.

More than as a potential stage star, however, Pedro’s creators value him as an instrument to explore the mysteries of our own speaking mechanism. Two vacuum tubes imitate the two tones combined in human speech -the buzzing sound of the vocal cords, for vowels like “a” and “e”; and the hissing sound of breath passing through the mouth and lips, for consonants like “s” and “f.” The keys operate electrical filters that transform the original tone into any desired speech sound, much as you shape your mouth to reinforce particular frequencies or “overtones” of the vocal cords.

Similar circuits gave an earlier “speech synthesizer” a sort of artificial voice (P. S.M., Feb. ’37, p. 46), but some one had to talk into it to make it work. The new “voice-operation demonstrator,” or Voder for short, owes its nickname to Dom Pedro, the Brazilian emperor who viewed Bell’s newly invented telephone and exclaimed, “My God, it talks!”