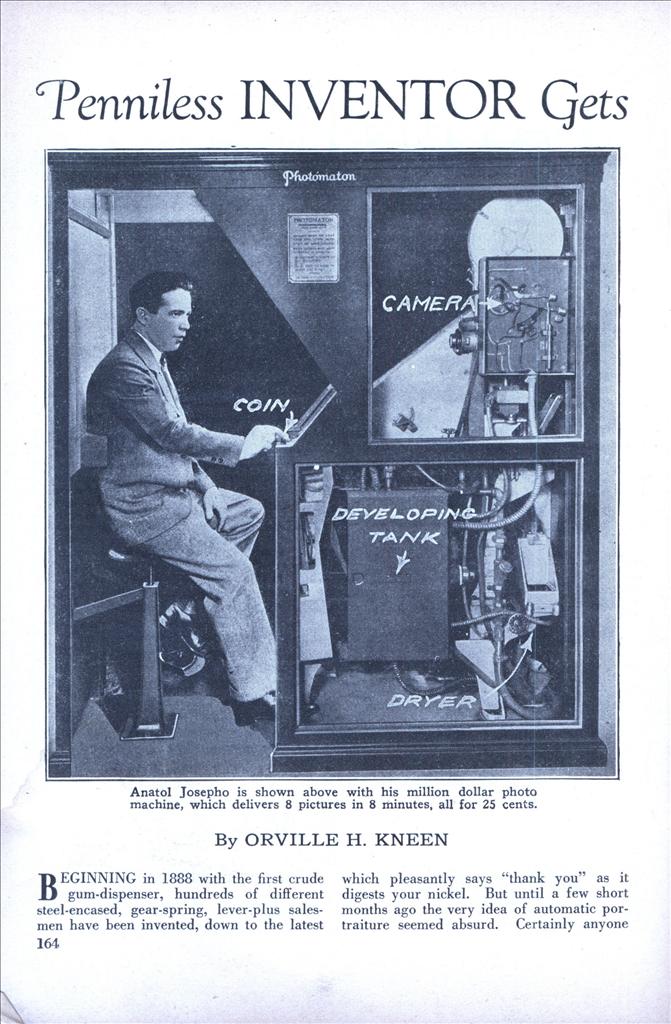 Ten years ago a penniless prisoner of the Bolsheviks; today an American millionaire! This fascinating story tells how a young Russian inventor persevered through years of discouragement and finally perfected a machine for taking automatic photos which he sold for a million dollars.

BEGINNING in 1888 with the first crude gum-dispenser, hundreds of different steel-encased, gear-spring, lever-plus salesmen have been invented, down to the latest which pleasantly says “thank you” as it digests your nickel. But until a few short months ago the very idea of automatic portraiture seemed absurd. Certainly anyone familiar with the complicated and highly technical process of adjusting the light, posing a trembling sitter, waiting for an elusive smile or appearance of sanity, developing and fixing plate or film, and finally making recognizable prints, would be the last to turn the job over to machinery.

Whether the admitted complication discouraged inventors, or whether their ingenuity was baffled, it is a fact that until a certain Russian immigrant landed in New York, short on dollars but long on ideas, the hands that waved the little birdie and pressed the bulb still pictured the nation’s beauty and chivalry.

The inventor of the Photomaton, Anatol Josepho, could do that, too, but for fourteen years of war-buffeting and wandering, he had firmly believed that machinery could do it better.

As we see it now, the important thing was that Josepho knew photography first, and mechanics second. It is a great deal easier to generate ideas than to make them work, or to know beyond question that they are worth the trouble of making them work. When Josepho told his own tale of those long years when life itself was a daily gamble, I felt that his story could not fail to inspire every discouraged inventor.

No Films Used in Photomaton

Perhaps the most interesting part of the indomitable little Russian’s machine is his method of direct photography on the paper. Much of the complication of photography comes from the use of glass plates or film. Josepho uses specially sensitized paper. Two inches of this are exposed at each snap of the shutter, while the sitter thinks pleasantly of sweetheart, friends, foreign travels or similarly cheerful subjects. In just 20 seconds his eight poses have been recorded, and he has but eight minutes to idle while the machine does the rest. Five 400-watt projection lamps, well placed, give just the right light on the subject.

An eighth-horsepower motor hums merrily. The strip is cut from a roll which will suffice for 800 more patrons. The exposed strip is fed by rollers into a 9-compartment tank, where it is quickly developed, “blanched,” cleared and toned, with a thorough washing between each process. Electric drying finishes the job, and the sitter is handed a strip faithfully recording his looks, such as they may be.

Every photographer, amateur or professional, is surprised at the simplicity and effectiveness of Josepho’s direct-photography. The paper is treated with a sensitive emulsion, in which are millions of microscopic particles of silver compound. The light rays from the sitter affect the particles, and when the paper is passed through the developer, those most affected are blackest, forming a negative similar to that usually made on transparent film or plate. Dark objects show up white, and all white objects are dark colored.

After a washing, the “negative” now passes into a powerful solution called “blanchite.” This dissolves all the black silver away, leaving the silver-compound image. After washing and “clearing” in another solution, the picture is a distinct but faint positive. Compartment No. 8 contains “seepitone,” which changes the pure white silver compound into a dark brown or black silver, and the strip of pictures is clear and complete, with every shading and item of detail as in ordinary photography.

Anatol Josepho’s amazing success, first in solving highly intricate problems in photography and mechanics, and second in interesting capital in his idea, proves anew the opportunities awaiting the practical inventor. He realized that it was not enough to have a new idea, or even to devise a working model of a machine designed to replace human hands.

From experience he knew the human being’s craving, among all races and all lands, for a permanent record of his face. Josepho’s photographic life had likewise taught him the constant demand for utilitarian portraits â€”for identification cards of all kinds, passports, employment records, expression-study, groups, and so on.

Thus, long before he was 32 and had received his “first million” all in one check, he knew that there was a place for a machine which would take pictures while the sitter was “off-guard,” develop them swiftly, and hand them over at 3-1/3 cents each. The success of the Pho-tom-aton (accent on the tom, please) is attested by the rapid installation of 120 machines in this country, Great Britain, South Africa, Shanghai and other lands. But it took Josepho some three years of unremitting work, not the least arduous being the trips from financier to capitalist to financier, before he had a machine and a capitalist who could see the profit in taking the “scare” and most of the cost out of portraits.

As an official of the company pointed out to me, Josepho early appreciated the advantage of eight views from which to choose.

A department for making enlargements is being installed by some of the large department stores in New York City, where the automatic portrait machine is enormously popular, it is said, with buyers of new hats, new furs, and new “bobs” as well as garments.

“I was born in the central part of Siberia,” Joseph told me. “I attended grammar schools, and later studied at the Institute of Engineering at Omsk. There I became interested in photography. To continue my studies in this field I scraped up enough money to go to Berlin.

“But my money soon ran low. I opened a photographic studio, and later moved to Budapest. My studio there made me a living while I experimented. When the World War broke out I attempted to return to Russia. I was caught at the border and interned under strict military surveillance.

“During the long idle days I conceived the idea of an automatic camera. In the extreme disorder following the Armistice I again tried to escape to my native land, but was imprisoned. For weeks I despaired. But then I found that most valuable of assetsâ€” a friend.

Risking Death for Freedom “We managed to bribe a Hungarian officer. From him we secured forged documents and Hungarian uniforms. On a dark night we scaled the prison camp’s barbed-wire walls, dodged the sentries, and a few hours later boarded a troop-train bound for Odessa. There we exchanged our uniforms for those of Russian prisoners.

“But the Revolution was under way. As we began to work our way across Bolshevik Russia, we were stopped and thrown into prison once more. But we had risked our lives too often by that time to be deterred. Three nights later we took advantage of a heavy storm and tried another escape. The alarm was given, and our lives hung in the balance as we fought our way past two guards.

“In the nick of time we reached the protecting forests. For eighteen days we traveled only at night. Nearing our homes, we grew careless and traveled by day. We thought our ragged condition would save us, but a second time the Bolsheviks picked us up as suspects and we were herded into a prison at Tchellisbinsk.

“Finally we interested an officer. He swung open the prison doors, even provided us with railroad passes. My friend and I parted, not to meet until years later, in a foreign land of promise. I went to Harbin, in Manchuria, and made money by buying goods in China and selling later at a high profit. But one day, while I was on the train, bandits took all my money. Once again I was penniless. But the thought of the automatic camera was always haunting me.

“I went to Shanghai and opened a photograph studio. There I took pictures of the English colony and the slant-eyed Chinese, while I worked out the details of my invention. By 1923 all I needed was money, and some delicate parts such as optical apparatus. I knew I could get them in America. Like all Europeans I had heard of the fortunes to be made there. So I sold my studio and sailed to San Francisco. For months I wandered about the country, arriving in New York with thirty dollars.

A Check for a Million “The next year was hard. Many times I found myself down to my last dollar. I sought friends willing to sink a few dollars in making a working model and getting patents. I knew it would revolutionize the making of portraits. At last some New York business man gave me enough to open a studio on Broadway. Six months’ trial was to prove whether the invention on which I had staked so much for fourteen years, was wanted by the public.

“We soon found out. Two thousand persons a day lined up at the studio and their quarters flowed into the slots. The Broadway crowds proved that my rapid-fire picture machine was a gold-mine. I will never forget the meeting where Mr. Henry Morgenthau, who you know was once ambassador to Turkey, handed me a check for one million dollars for my interest in the Photomaton camera.

“This proved to me how generous American business men can be. I am now able to work on other ideas I have, to make the necessities and luxuries of life available to every one.”

One unexpected result of the immigrant’s success, apart from making him an American citizen, is the trust fund he has established to help other inventors. Out of this timely aid may come some of the great inventions on which tomorrow’s progress, comfort and happiness will depend.

Thus the self-portrait machine of a penniless photographer may hasten the age of the slot-machine salesman. As human hands become increasingly expensive for purely mechanical work, Josepho and his million doubtless will replace them with steel-faced salesmen of everything from shoes to hats, from balloon tires to new limousines, and automatic portraits of ourselves in the chauffeur’s seat. If only Josepho and his inventor-friends could make us a coin-operated greenback machine, and “nickelodeons” that yield bright new nickels instead of devouring them!