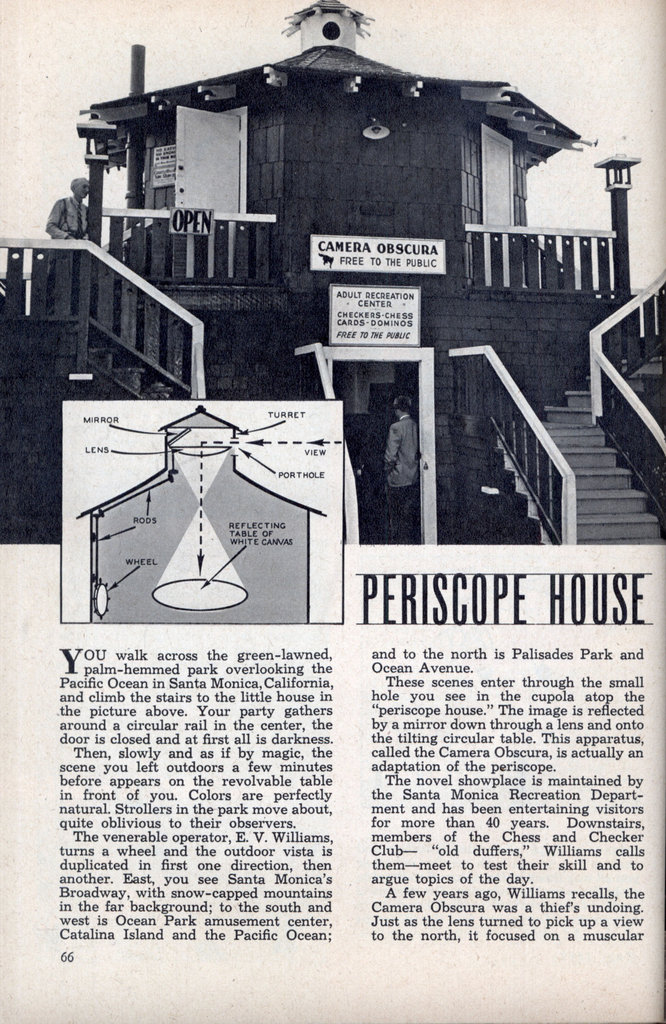 The venerable operator, E. V. Williams, turns a wheel and the outdoor vista is duplicated in first one direction, then another. East, you see Santa Monica’s Broadway, with snow-capped mountains in the far background; to the south and west is Ocean Park amusement center, Catalina Island and the Pacific Ocean; and to the north is Palisades Park and Ocean Avenue.

These scenes enter through the small -hole you see in the cupola atop the “periscope house.” The image is reflected by a mirror down through a lens and onto the tilting circular table. This apparatus, called the Camera Obscura, is actually an adaptation of the periscope.

The novel showplace is maintained by the Santa Monica Recreation Department and has been entertaining visitors for more than 40 years. Downstairs, members of the Chess and Checker Clubâ€” “old duffers,” Williams calls themâ€”meet to test their skill and to argue topics of the day.

A few years ago, Williams recalls, the Camera Obscura was a thief’s undoing. Just as the lens turned to pick up a view to the north, it focused on a muscular youth stealthily approaching a woman asleep on the grass in the park. The audience, gasping at the image before them, saw the young athlete steal the sleeper’s purse and sneak away to rifle its contents.

Williams hastily summoned an officer who apprehended the thief with the money, watch and other valuables from the purse still in his possession. The purse had disappeared down a storm sewer. The victim went into hystericsâ€” and back to her home in Philadelphia with a hearty regard for the Camera Obscura.

The Camera was built by John P. Jones, who received an inspiration for its construction while abroad. And only recently a world traveler took down construction details of the Santa Monica attraction with the idea of building a similar structure in Europe.

Williams, a bachelor who guards his age with a spinster’s vigilance, is “only temporary” on the job, he says. He’s been at it 13 years. His real interest is the Chess and Checker Club downstairs, but he never minds leaving a close game in order to demonstrate the Camera.