You can hear Phil Cook being interviewed in this 29 December 1940 episode of Behind The Mike. 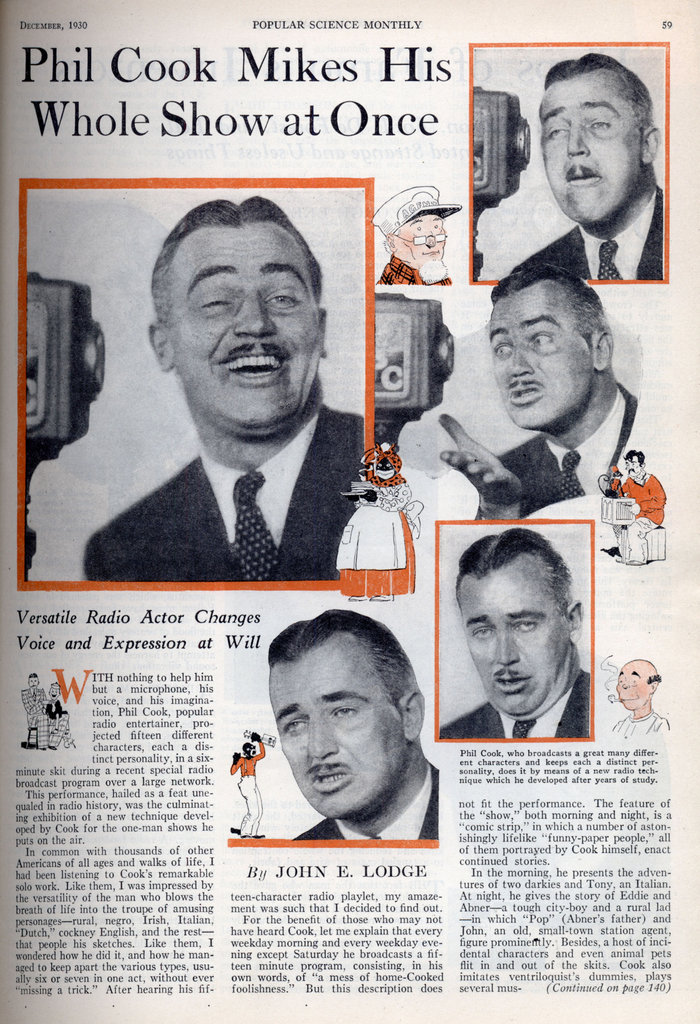 Phil Cook Mikes His Whole Show at Once

Versatile Radio Actor Changes Voice and Expression at Will.

WITH nothing to help him but a microphone, his voice, and his imagination, Phil Cook, popular radio entertainer, projected fifteen different characters, each a distinct personality, in a six-minute skit during a recent special radio broadcast program over a large network.

This performance, hailed as a feat unequaled in radio history, was the culminating exhibition of a new technique developed by Cook for the one-man shows he puts on the air.

In common with thousands of other Americans of all ages and walks of life, I had been listening to Cook’s remarkable solo work. Like them, I was impressed by the versatility of the man who blows the breath of life into the troupe of amusing personages—rural, negro, Irish, Italian, “Dutch,” cockney English, and the rest— that people his sketches. Like them, I wondered how he did it, and how he managed to keep apart the various types, usually six or seven in one act, without ever “missing a trick.” After hearing his fif- teen-character radio playlet, my amazement was such that I decided to find out.

For the benefit of those who may not have heard Cook, let me explain that every weekday morning and every weekday evening except Saturday he broadcasts a fifteen minute program, consisting, in his own words, of “a mess of home-Cooked foolishness.” But this description does not fit the performance. The feature of the “show,” both morning and night, is a “comic strip,” in which a number of astonishingly lifelike “funny-paper people,” all of them portrayed by Cook himself, enact continued stories.

In the morning, he presents the adventures of two darkies and Tony, an Italian. At night, he gives the story of Eddie and Abner—a tough city-boy and a rural lad —in which “Pop” (Abner’s father) and John, an old, small-town station agent, figure prominently. Besides, a host of incidental characters and even animal pets flit in and out of the skits. Cook also imitates ventriloquist’s dummies, plays several mus ical instruments, including the piano, the violin, and the saxophone lor his “actors,” and sings gay little ditties in comment on the news of the day.

The other evening I visited National Broadcasting Company headquarters, New York, to see Phil broadcast his one-man show. Softly strumming a “tiple,” a cross between a ukulele and a guitar, he sat upon a low stool before a microphone and a music stand in one of the small studios. Blond, blue-eyed, six feet tall, broad-shouldered, he looked like an all-American halfback ready to entertain his classmates at a college smoker.

SEVEN-THIRTY sharp. Grinning from ear to ear, Cook began his introductory song. In the fifteen minutes that followed, I witnessed a phenomenon the like of which I have never seen. With each character he took, Phil completely changed his voice without a moment’s pause for transition, switching the quality back and forth in the dialogue like a juggler keeping several bal’s in the air at once. This was done without the slightest show of effort. And each time his voice changed, his face assumed an entirely different expression. It was evident that he actually “lived” the little people of his sketch.

Though reading his material from a manuscript on the music stand, he succeeded in creating the illusion of improvising it on the spot. Through it all, he managed to keep an eye on the man at the mixing panel in the control room, separated from the studio by a window. He afterward explained to me that he did this to watch the control man’s reactions.

“Those boys are pretty hard-boiled,” he said. “They have heard the best. If that lad’s upper lip as much as curls, I know there is a roar of laughter ‘on the outside’.”

During the broadcast, Phil continually shifted his position on the stool. Sometimes he was only an inch or two from the microphone. ‘ Then again, he moved to a distance of six, eight, ten inches and even a foot. He never exactly faced the microphone, which stood to the right of his face. In speaking certain lines, he turned his head toward it; at other times, he turned his head away.

Aside from the actual changes in vocal quality and dialect, these slight motions, I discovered, really constitute the secret of Cook’s amazing technique. Effortless and spontaneous though they sound when coming from your loudspeaker, these little skits are the result of an enormous amount of hard work, experience, skill, and constant study.

For years Cook has studied the matter of microphone values and reduced it to a science. His own voice is husky in quality and low at all times. He knows exactly how to manipulate it so that, on the air, it will sound now like a booming bass, then like the childish falsetto of a ventriloquist’s dummy, the throaty drawl of a Southerner, the wheezy, nasal voice of an old farmer, the high-pitched giggle of a negro mammy.

Here, in Cook’s own words, is how he does it: “To project Eddie, the hard, wise-cracking boy from the city,” he told me, “I talk out of the side of my mouth, a bit nasal and high-pitched. To get him on the air properly, I turn my head away from the microphone and keep a distance of eight inches.

His lines I speak six inches away from the mike. ‘Pop,’ his father, has less voice, and for him, too, I take a distance of six inches.

“When I ‘play’ John, the old station agent, I draw both upper and lower lip over my teeth and talk in a very soft, throaty voice. The drawn lips produce the whistling and wheezy effect. Two inches from the mike is all I allow for him.

“Hemmingsway, the Englishman, also is very soft and a bit adenoidal. For him I speak as closely to the mike as I do for old John. The Irish voice is thick and ‘breathy.’ To produce this, I make a double chin. Five inches, I find, is the proper distance for Dad O’Brien.

”As for the morning characters, one of the black-face boys speaks in a slow, forced bass. He is very difficult, and must be projected from two to three inches from the microphone. The other colored lad has a high, nasal, rasping voice. Ten inches for him. Tony, the Italian, excited, loud, and boisterous, talks at a distance of eight or nine inches away from the mike.

“The imitation of the ventriloquist’s dummies, on the air, is done in falsetto with head away from the mike, at a distance of a foot. The same goes for the negro mammy. She, being a woman, speaks in a bit softer falsetto.”

Phil is on the air for fifteen minutes twice a day, at eight o’clock in the morning and at seven-thirty at night. At nine in the- morning, he repeats the eight o’clock broadcast for the benefit of the Middle West and the Rocky Mountain section. But these forty-five minutes of his work which you and I enjoy entail nineteen hours of labor on his part! He writes every word of his material and composes his own tunes. Here is a typical Phil Cook day: Rises at six a. m. Gets the morning paper at six twenty a. m. and selects three news items of national interest. Writes ditties about them and inserts these in the morning “show,” written the night before. This is finished at seven a. m. Drinks a cup of coffee and walks to studio, which is reached at seven-thirty. Prepares for his act. Goes on air at eight. Finished at eight-fifteen. Has the rest of his breakfast. Returns to studio at eight-forty-five. Goes on air again at nine o’clock. Finished at nine-fifteen.

ATTENDS to personal affairs, correspondence, conferences, and the like, and tries to get in one hour’s nap between nine-fifteen and noon. After lunch, writes the evening show. This takes at least five hours and is finished about five-thirty P.M. Eats light dinner. Walks to studio, which is reached at seven o’clock. Prepares for evening act. Goes on air at seven-thirty P.M. Finished at seven-forty-five. Goes home and writes morning show, which is completed about one a. m.

Hard work and—lonely! Phil does his heavy work and his light sleeping and eating in a New York City hotel room. His family, wife and baby daughter, live at his real home at Avon, on the New Jersey coast. He sees them one day each week, on Sundays.

But there are compensations. Cook’s salary is said to be $50,000 a year. And he has the satisfaction of knowing that his shows are broadcast over the largest network used for any “single” act—thirty-five stations in the morning and thirty-seven in the evening. Then, too, many listeners write him letters, telling him how much they enjoy his work. In August, he received more than 10,000 letters, the record mail for any solo performer on the air.