Popular Mechanics
Issue: May, 1924
Posted in: Origins, Telephone
5 Comments on PHONE CALLS ARE ANSWERED BY MACHINE (May, 1924)

PHONE CALLS ARE ANSWERED BY MACHINE (May, 1924) 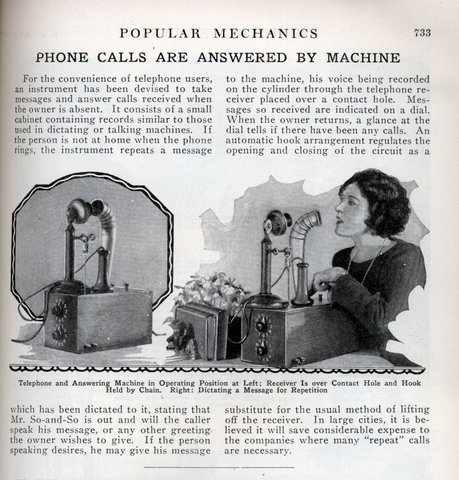 PHONE CALLS ARE ANSWERED BY MACHINE

For the convenience of telephone users, an instrument has been devised to take messages and answer calls received when the owner is absent. It consists of a small cabinet containing records similar to those used in dictating or talking machines. If the person is not at home when the phone rings, the instrument repeats a message which has been dictated to it, stating that Mr. So-and-So is out and will the caller speak his message, or any other greeting the owner wishes to give. If the person speaking desires, he may give his message to the machine, his voice being recorded on the cylinder through the telephone receiver placed over a contact hole. Messages so received are indicated on a dial. When the owner returns, a glance at the dial tells if there have been any calls. An automatic hook arrangement regulates the opening and closing of the circuit as a substitute for the usual method of lifting off the receiver. In large cities, it is believed it will save considerable expense to the companies where many “repeat” calls are necessary.