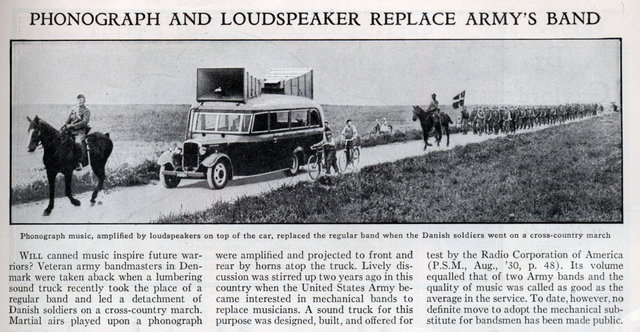 Will canned music inspire future warriors? Veteran army bandmasters in Denmark were taken aback when a lumbering sound truck recently took the place of a regular band and led a detachment of Danish soldiers on a cross-country march. Martial airs played upon a phonograph were amplified and projected to front and rear by horns atop the truck. Lively discussion was stirred up two years ago in this country when the United States Army became interested in mechanical bands to replace musicians. A sound truck for this purpose was designed, built, and offered for test by the Radio Corporation of America (P.S.M., Aug., ’30, p. 48). Its volume equalled that of two Army bands and the quality of music was called as good as the average in the service. To date, however, no definite move to adopt the mechanical substitute for bandsmen has been made public.