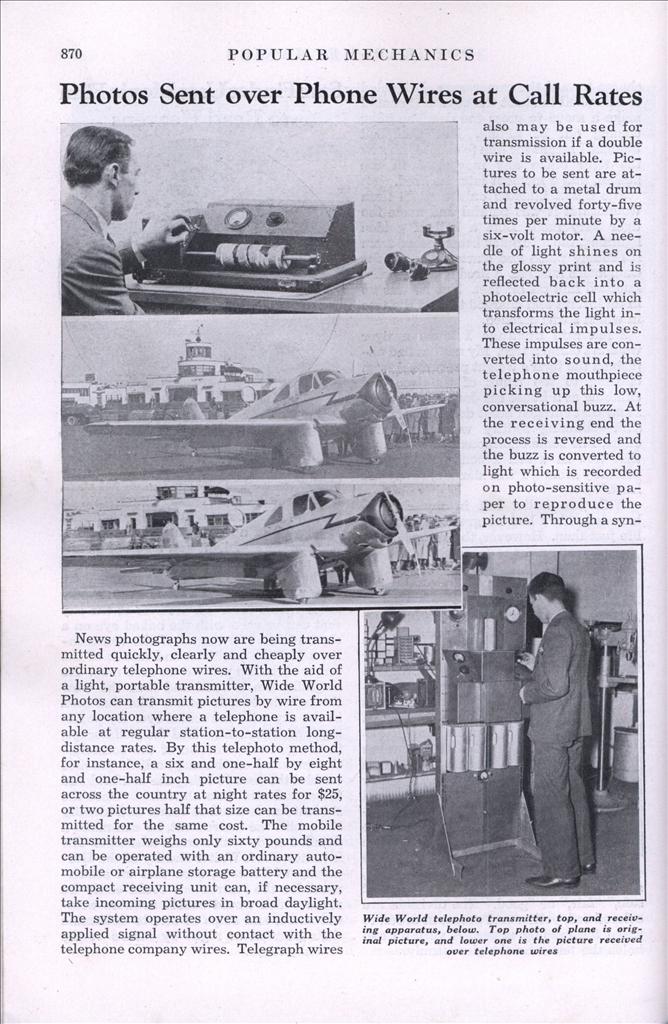 News photographs now are being transmitted quickly, clearly and cheaply over ordinary telephone wires. With the aid of a light, portable transmitter, Wide World Photos can transmit pictures by wire from any location where a telephone is available at regular station-to-station long distance rates. By this telephoto method, for instance, a six and one-half by eight and one-half inch picture can be sent across the country at night rates for $25, or two pictures half that size can be transmitted for the same cost. The mobile transmitter weighs only sixty pounds and can be operated with an ordinary automobile or airplane storage battery and the compact receiving unit can, if necessary, take incoming pictures in broad daylight. The system operates over an inductively applied signal without contact with the telephone company wires. Telegraph wires also may be used for transmission if a double wire is available. Pictures to be sent are attached to a metal drum and revolved forty-five times per minute by a six-volt motor. A needle of light shines on the glossy print and is reflected back into a photoelectric cell which transforms the light into electrical impulses. These impulses are converted into sound, the telephone mouthpiece picking up this low, conversational buzz. At the receiving end the process is reversed and the buzz is converted to light which is recorded on photo-sensitive paper to reproduce the picture. Through a synchronization process, this system has conquered the telephone “carrier circuits.” These circuits, as differentiated from metallic circuits, are in operation in some parts of the south and west and heretofore distorted photographic signals to such an extent that pictures were spoiled. This has been corrected by the synchronization process to a point where it is claimed pictures can be transmitted over telephone wires when it is all but impossible to conduct a connected conversation.