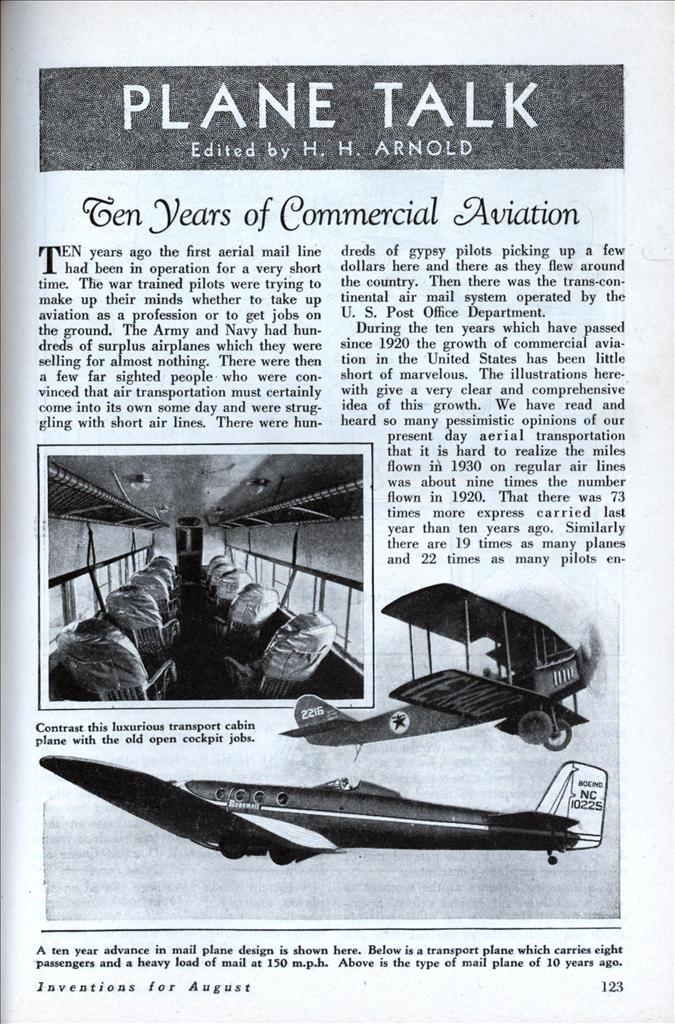 TEN years ago the first aerial mail line had been in operation for a very short time. The war trained pilots were trying to make up their minds whether to take up aviation as a profession or to get jobs on the ground. The Army and Navy had hundreds of surplus airplanes which they were selling for almost nothing. There were then a few far sighted people who were convinced that air transportation must certainly come into its own some day and were struggling with short air lines. There were hundreds of gypsy pilots picking up a few dollars here and there as they flew around the country. Then there was the trans-continental air mail system operated by the U. S. Post Office Department.

During the ten years which have passed since 1920 the growth of commercial aviation in the United States has been little short of marvelous. The illustrations herewith give a very clear and comprehensive idea of this growth. We have read and heard so many pessimistic opinions of our present day aerial transportation that it is hard to realize the miles flown in 1930 on regular air lines was about nine times the number flown in 1920. That there was 73 times more express carried last year than ten years ago. Similarly there are 19 times as many planes and 22 times as many pilots en- gaged in established commercial operations.

While the above figures would indicate that our air transport lines have taken on a natural healthy growth, the volume of business will be materially increased when passengers can ride with the same feeling of safety that they have on railroad trains. This may be brought about by a different design of planes or by the general use of individual or airplane parachutes.

The autogiro appears at the moment to offer possibilities for greater safety. Sport-type ships of this type are now available which can land on the proverbial dime and take off on a field no larger than a tennis court.

PASSENGERS riding the transport planes of the German air company, Deutsche Luft Hansa, may now send commercial telegrams not in code and not exceeding fifteen words to stations on the ground, according to advices received from Trade Commissioner A. Douglas Cooke at Berlin.

Telegram blanks have been placed on all planes, and one merely writes his message and hands it to the steward. It is sent to the ground station, with which the pilot is in communication, by radio, and forwarded from there the same as any telegram.

ANY one who spends much time around an aviation field sees many kinds of landings. When a pilot makes a pancake landing he levels off and lands ten feet or more above the ground. As a result the plane drops to the ground with a flop that uses up all of the flexibility of the shock absorbing device. In some cases there are no resulting breakages but in others the entire landing gear seems to slowly fold up under the plane. However it is remarkable the rough usage a landing gear will stand. Modern planes are tested with a view of insuring a factor of safety sufficient to withstand a moderate pancake. The present day pilot normally flies in worse weather and flies in bad weather more often than the pilot of ten years ago. Thus the planes are given much worse treatment in landings for the visibility or lack of visibility has a direct bearing upon whether a good or bad landing is going to be made.

The accompanying photo shows an airplane being given a landing gear test. The bare fuselage with landing gear is loaded until it carries a weight equal to the maximum for which the plane was built. It is then raised to an inclined platform. The fuselage is then cut loose and allowed to fall freely.