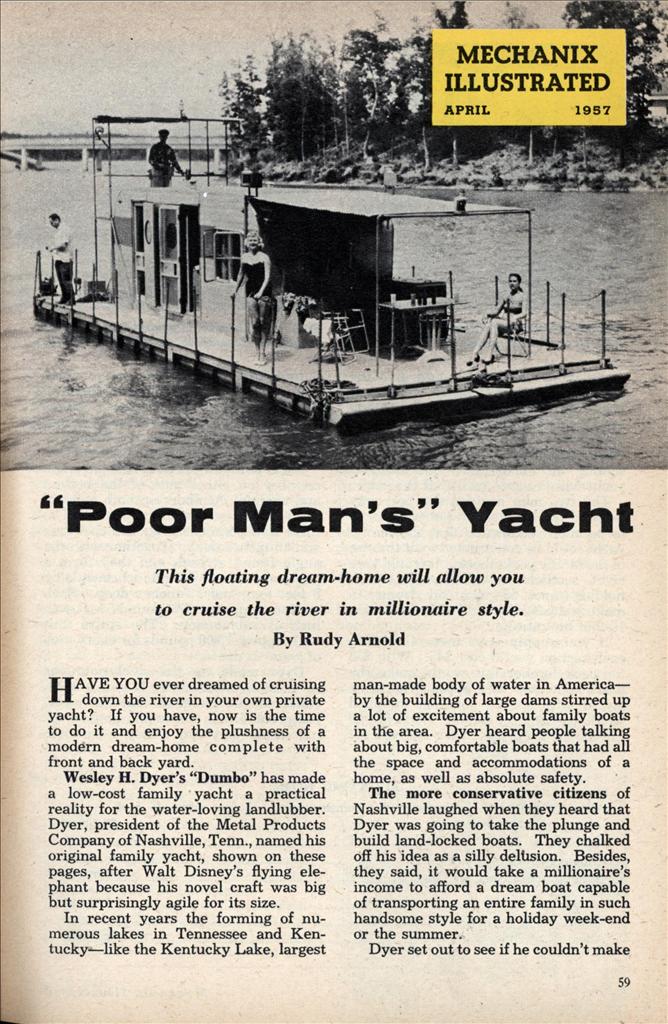 This floating dream-home will allow you to cruise the river in millionaire style.

HAVE YOU ever dreamed of cruising down the river in your own private yacht? If you have, now is the time to do it and enjoy the plushness of a modern dream-home complete with front and back yard.

Wesley H. Dyer’s “Dumbo” has made a low-cost family yacht a practical reality for the water-loving landlubber. Dyer, president of the Metal Products Company of Nashville, Tenn., named his original family yacht, shown on these pages, after Walt Disney’s flying elephant because his novel craft was big but surprisingly agile for its size.

In recent years the forming of numerous lakes in Tennessee and Kentucky—like the Kentucky Lake, largest man-made body of water in America— by the building of large dams stirred up a lot of excitement about family boats in the area. Dyer heard people talking about big, comfortable boats that had all the space and accommodations of a home, as well as absolute safety.

The more conservative citizens of Nashville laughed when they heard that Dyer was going to take the plunge and build land-locked boats. They chalked off his idea as a silly delusion. Besides, they said, it would take a millionaire’s income to afford a dream boat capable of transporting an entire family in such handsome style for a holiday week-end or the summer.

Dyer set out to see if he couldn’t make a real houseboat that would give the new lake dwellers exactly what they wanted. He recalled that he had made special pontoons for many military uses during World War II. He talked to his chief engineer, Charlie Mager, about designing an inexpensive but spacious yacht with an auto trailer as the cabin.

The two men decided the best way to build the hull was to put it together in pontoon sections so that the family yacht could be constructed to fit the size of the family pocketbook. It would take eight sections bolted together, each holding three 55-gallon oil drums, to make a 16×24-foot hull able to float a 16-foot housetrailer.

If you supply your own oil drums, each section would cost $45. With $35 for deck lumber this would make the basic boat cost only $395. The same layout with special pontoons supplied would cost $60 per section. Add to this the $35 for the deck lumber and you get a total of $515 for this unique craft.

For Dyer’s original experimental Dumbo he* used 19 pontoon sections bolted together to form a barge 15 feet wide and 40 feet long on which he placed a 23-foot Mid-State housetrailer.

Each pontoon section has an angle member on either side of the bottom and channel members on both sides of the top. These members are bolted to three steel pontoons 25^x42 inches long and 15 inches deep. Together with the angle frame at each end they form a pontoon section 3 feet, 6 inches wide by 8 feet long and 18 inches deep. Each section supports 100 pounds for each inch of submersion. The entire unit will support 1,900 pounds for every inch of water it draws.

Dyer made up the steel pontoons in these sections from 18-gauge cold-rolled steel. He then had the metal rustproofed with a zinc phosphate coating inside and out. They were then tested with two pounds of air pressure to check against possible leaks and sprayed with an oil mist on the inside. For further anti-corrosion treatment he had all parts painted with Navy specification zinc chromate primer. The bolts are all cadmium plated.

On the forward end Dumbo has a false bow which is not essential to the boat. For the power plant there are motor mounts for two outboards at the stern. Instead of a rudder, the mounts are set near the sides of the vessel. By controlling the engine speeds of each motor Dyer can steer his craft from the flying bridge with greater flexibility than a rudder-guided motorboat and can turn his ship around in almost its own length at any running speed—an impossible stunt for a conventional yacht.

The Dumbo’s skipper can sail the housetrailer from the flying bridge. Once the outboards are firing, you can refuel the family yacht under way without stopping from two five-gallon tanks hung under the flying bridge.

A storage battery powers the navigation lights. Under the flying bridge on the deck is the trailer’s gasoline-powered generating plant for interior and running lights and for powering the water pressure unit for the modern kitchen and shower bathroom.

In its trial run up the Cumberland River through Tennessee and Kentucky into the Ohio River, Dyer deliberately navigated close to giant tugs to test the structural rigidity and seaworthiness. The Dumbo rode the waves like a duck on a midsummer millpond. Strong winds had very little effect on the yacht’s handling. On the maiden voyage Dumbo covered 271 miles from Nashville to Paris Landing on Kentucky Lake in 71 hours.

He has already had the last laugh on those who scoffed at his idea and the boating fraternity got their dream—at a price that they could afford. •