Mechanics And Handicraft
Issue: May, 1938
Posted in: How to
Tags: magic
No Comments on Popular Magic by Dunninger (May, 1938) 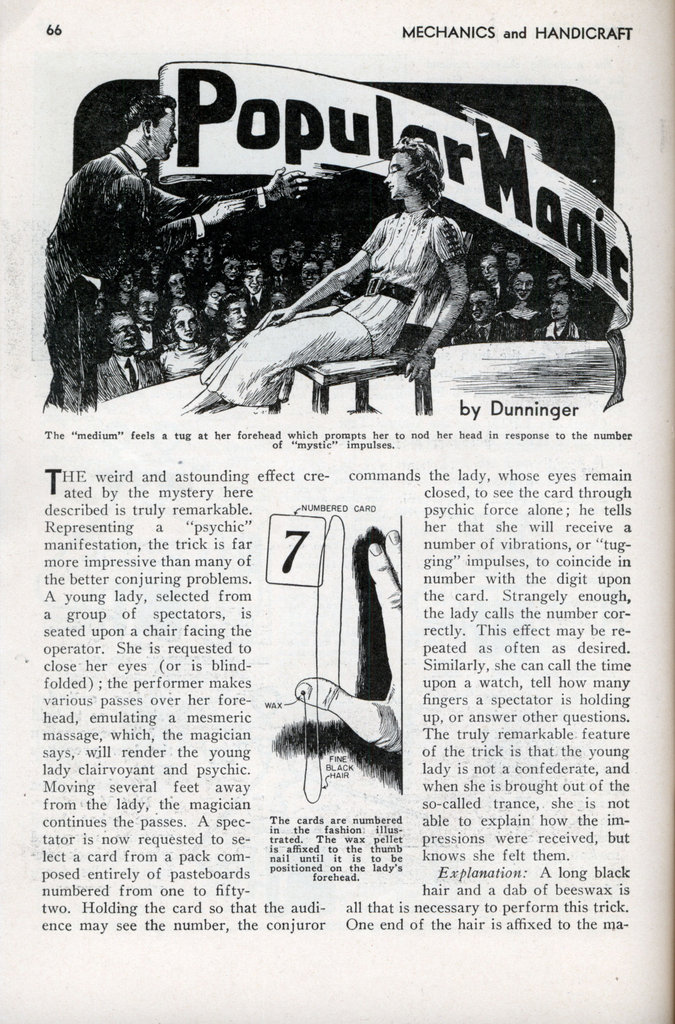 Joseph Dunninger, celebrated “mentalist” and magician, whose articles appear exclusively in this publication, is the world’s foremost society entertainer, and has appeared before more celebrities than any of his contemporaries. Among those he has mystified are President Franklin D. Roosevelt, ex-Presidents William Howard Taft, Calvin Coolidge, Warren Harding, Herbert Hoover and Theodore Roosevelt, H. R. H. Duke of Windsor (formerly King Edward VIM), Thomas A. Edison, etc.

THE weird and astounding effect created by the mystery here described is truly remarkable. Representing a “psychic” manifestation, the trick is far more impressive than many of the better conjuring problems.

A young lady, selected from a group of spectators, is seated upon a chair facing the operator. She is requested to close her eyes (or is blindfolded) ; the performer makes various passes over her forehead, emulating a mesmeric massage, which, the magician says, will render the young lady clairvoyant and psychic. Moving several feet away from the lady, the magician continues the passes. A spectator is now requested to select a card from a pack composed entirely of pasteboards numbered from one to fifty-two. Holding the card so that the audience may see the number, the conjuror commands the lady, whose eyes remain closed, to see the card through psychic force alone; he tells her that she will receive a number of vibrations, or “tugging” impulses, to coincide in number with the digit upon the card. Strangely enough, the lady calls the number correctly. This effect may be repeated as often as desired.

Similarly, she can call the time upon a watch, tell how many ringers a spectator is holding up, or answer other questions. The truly remarkable feature of the trick is that the young lady is not a confederate, and when she is brought out of the so-called trance, she is not able to explain how the impressions were received, but knows she felt them.

Explanation: A long black hair and a dab of beeswax is all that is necessary to perform this trick.

One end of the hair is affixed to the magician’s thumb, and a pellet of wax is tightly fastened to the other end of the hair. When making the mysterious passes over the young lady’s forehead, the magician secretly presses the pellet of wax upon her head; then from a distance of several feet he secretly signals the required number of “vibrations” by jerking the hair. When bringing the young lady out of the trance the wax pellet is secretly removed under cover of the “hypnotic” massage of the forehead. The pellet is carried upon the magician’s thumb-nail during the earlier stages of the demonstration until such time as it becomes necessary to affix the hair to the lady’s forehead.

The enchanted string is the name of the second mystery presented this month. A length of rope, approximately six yards long, and a bamboo stick of ordinary variety, eighteen inches in length, are passed for inspection. Having been found unprepared, they are returned to the performer, who wraps the rope around the bamboo stick, making eight or nine loops. The free ends of the rope are held by a spectator; the bamboo rod is held by the wizard, as

illustrated. At the count of three, the spectator is requested to pull upon the rope. Mysteriously, it pulls clear of the bamboo, apparently passing right through. All is then passed for inspection.

Explanation: The secret lies in the use of a small peg of wood which is introduced into a hole bored in the center of the bamboo rod. After two or three turns of the rope have been wound around the rod, the rope is held in position by the secreted peg, and is twisted in the opposite direction the same number of times. Apparently, all seems fair; but if the rope has been wound in a manner illustrated, one will find that upon removing the peg, the rope will slip from the stick. A short length of silk thread, secretly tied to the magician’s vest, has been fastened to the

peg. At the count of three, the magician moves his arms forward, which action pulls the peg from out of its cavity, and automatically releases the rope. The small peg is painted a dead black, and dangles freely from the end of the thread until such time as the performer sees fit to remove it. But this is quite easy because while the spectators are busy examining the rope and bamboo rod, ample opportunity is offered for removal of the blackened gimmick.

Our next trick is an excellent impromptu effect ideally suited for presentation after dinner. When the cigarettes are passed, the magician helps himself to one; lighting it, he comments upon the poor quality of the tobacco, or the brand of cigarettes offered. Naturally, this criticism is resented; immediately the magician apologizes and advises that he will remedy matters. Pushing the cigarette into his closed fist, he transforms it into a cigar, already lighted, which he smokes nonchalantly.

Explanation: The cigar itself is a “fake” into which the cigarette has vanished. It is made of a short length of brass tubing around which has been wound several tobacco leaves used for wrapping cigars. The distant end of the metal tube is sealed with a metal disc drilled with a number of small holes. At the presentation of the trick the cigar is secretly palmed in the left hand; the lighted cigarette is introduced into the tube; the cigar is then brought up to the mouth. By alternately puffing and blowing the cigarette will remain lit long enough to startle the audience into believing the magician has “manufactured” a real cigar.