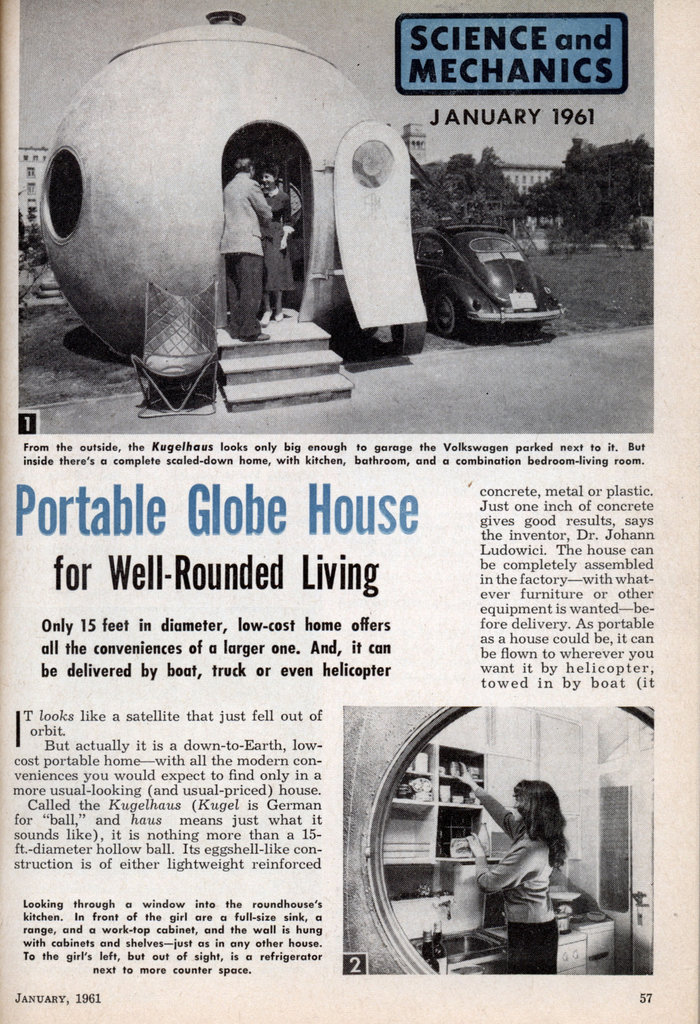 Only 15 feet in diameter, low-cost home offers all the conveniences of a larger one. And, it can be delivered by boat, truck or even helicopter.

IT looks like a satellite that just fell out of orbit. But actually it is a down-to-Earth, low-cost portable homeâ€”with all the modern conveniences you would expect to find only in a more usual-looking (and usual-priced) house. Called the Kugelhaus (Kugel is German for “ball,” and haus means just what it sounds like), it is nothing more than a 15-ft.-diameter hollow ball. Its eggshell-like construction is of either lightweight reinforced concrete, metal or plastic. Just one inch of concrete gives good results, says the inventor, Dr. Johann Ludowici. The house can be completely assembled in the factoryâ€”with whatever furniture or other equipment is wantedâ€”before delivery. As portable as a house could be, it can be flown to wherever you want it by helicopter, towed in by boat (it floats), or, more conventionally, carried on a truck.

Of course, if you are the type of person who collects things and needs a lot of space to store them, or if you have a big family, you probably would not want to live in a Kugel-haus permanently.

But its scaled-down kitchen, bathroom, and bedroom-living room make it ideal for use as that weekend or summer home you’ve always wanted but couldn’t afford. It could also be a low-cost, easy-to-maintain retirement home, and our Air Force has shown interest in it as possible airmen’s quarters at emergency airfields.

Bigger Than It Looks. You could use it as permanent housing if you wanted to, though, and comfortably, since when you take a look inside you find that its appearance of small-ness is deceptive.

Dr. Ludowici, a German engineer and inventor, has worked a veritable miracle in his efficient use of the Kugelhaus’s space.

The house’s diameter of about 12 ft, 4 in. at the floor level gives it a total floor area of about 120 sq. ft. That is roughly the same space you would find in a typical bedroom of a more conventional house.

A number of different floor plans are available (Fig. 3), but all have the same area and share these features:

â€¢ A kitchen, with all the necessities. There is a stove, either bottled-gas or electric; a refrigerator; a stainless steel sink, and wall-hung cabinets and storage shelves.
â€¢ A bathroom, with bathtub-and-shower, sink, toilet, and more cabinets.
â€¢ A combination bedroom-living room that typifies Dr. Ludowici’s triumph of planning and ingenuity over lack of space.

Occupying about half the area of the house, the bedroom-living room has two foam rubber davenports set against the curving outside wall which convert to beds and ‘which have large drawers built-in under them. A table folds down from the wall for eating or writing. More shelves line the walls, and there are two closets.

The areas above the ceiling and below the floor offer room for water tanks (in case there is no outside supply) or heating fuel tanks, as well as storage space for bulky items such as luggage, extra clothing, tools, books or whatever.

A “mechanical core”â€”or “installation wall” as Dr. Ludowici calls itâ€”forms the partition between kitchen and bathroom and contains all the wiring and plumbing needed, as well as a warm air heater and chimney.

No Footings or Foundation

Aside from its portability and good planning, the Kugelhaus offers another advantage: Almost no preparation of a building site is needed.

The house can be delivered fully furnished, andâ€”instead of costly and time-consuming excavating, footings and foundationâ€”it requires only the digging of a slight depression into which it can fit, along with utilities and plumbing hookups, (Fig. 5).

Its portability and quick-readiness for use, as a matter of fact, are the reasons that the roundhouse exists today.

It was designed at the request of the Belgian government, which wanted a low-cost small house that still had all the essential comforts. It had to be light and buoyant enough to be towed up rivers or flown into remote regions of Africa, where it would be used for worker housing.

So Dr. Ludowici, working in the small German town of Jockgrim-Pfalz, near Karlsruhe, came up with the Kugelhaus. He based his design on the principle, known to every geometry student, that a sphere contains the greatest possible volume for the least surface areaâ€”a principle little used in housing until now, except for the Eskimo and his igloo.

One model of the roundhouse is relatively light for its size, weighing only three to four tons, and was designed especially with water or air transport in mind, since it is easily carried by a heavy-duty ‘copter such as the twin-turbine Vertol 107 shown on the cover.

A heavier model weighs eight to 12 tons, and it also floats, although it more commonly is transported on trailer trucks (Fig. 7).

Price of the Kugelhaus ranges between $1,500 and $4,500, depending on what furnishings are included. As of now, it is not sold in the United States, since transportation costs and import duties would raise its price considerably, says Dr. Ludowici. But a Kugelhaus exhibit in the library of the National Housing Center, Washington, D. C, recently aroused considerable interest; and Dr. Ludowici believes there is a good chance the house could be produced here and sold at low cost.