PRACTICAL AND MYSTIFYING HOME TESTS YOU CAN MAKE WITH IRON (Aug, 1933) 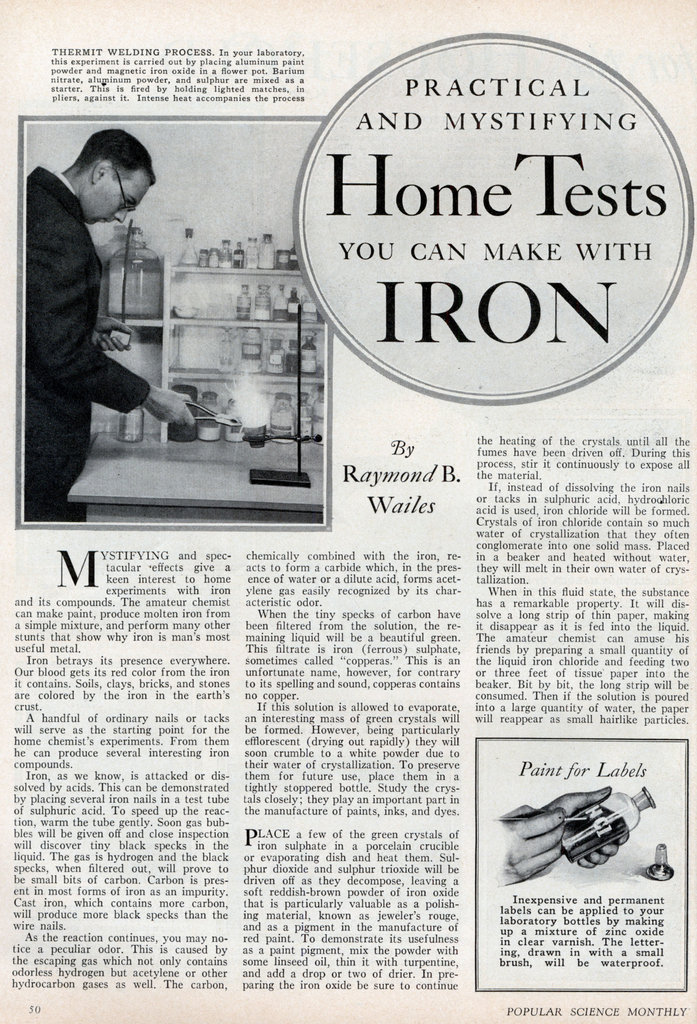 PRACTICAL AND MYSTIFYING HOME TESTS YOU CAN MAKE WITH IRON

MYSTIFYING and spectacular ‘effects give a keen interest to home experiments with iron and its compounds. The amateur chemist can make paint, produce molten iron from a simple mixture, and perform many other stunts that show why iron is man’s most useful metal.

Iron betrays its presence everywhere. Our blood gets its red color from the iron it contains. Soils, clays, bricks, and stones are colored by the iron in the earth’s crust.

A handful of ordinary nails or tacks will serve as the starting point for the home chemist’s experiments. From them he can produce several interesting iron compounds.

Iron, as we know, is attacked or dissolved by acids. This can be demonstrated by placing several iron nails in a test tube of sulphuric acid. To speed up the reaction, warm the tube gently. Soon gas bubbles will be given off and close inspection will discover tiny black specks in the liquid. The gas is hydrogen and the black specks, when filtered out, will prove to be small bits of carbon. Carbon is present in most forms of iron as an impurity. Cast iron, which contains more carbon, will produce more black specks than the wire nails.

As the reaction continues, you may notice a peculiar odor. This is caused by the escaping gas which not only contains odorless hydrogen but acetylene or other hydrocarbon gases as well. The carbon, chemically combined with the iron, reacts to form a carbide which, in the presence of water or a dilute acid, forms acetylene gas easily recognized by its characteristic odor.

When the tiny specks of carbon have been filtered from the solution, the remaining liquid will be a beautiful green. This filtrate is iron (ferrous) sulphate, sometimes called “copperas.” This is an unfortunate name, however, for contrary to its spelling and sound, copperas contains no copper.

If this solution is allowed to evaporate, an interesting mass of green crystals will be formed. However, being particularly efflorescent (drying out rapidly) they will soon crumble to a white powder due to their water of crystallization. To preserve them for future use, place them in a tightly stoppered bottle. Study the crystals closely; they play an important part in the manufacture of paints, inks, and dyes.

PLACE a few of the green crystals of iron sulphate in a porcelain crucible or evaporating dish and heat them. Sulphur dioxide and sulphur trioxide will be driven off as they decompose, leaving a soft reddish-brown powder of iron oxide that is particularly valuable as a polishing material, known as jeweler’s rouge, and as a pigment in the manufacture of red paint. To demonstrate its usefulness as a paint pigment, mix the powder with some linseed oil, thin it with turpentine, and add a drop or two of drier. In preparing the iron oxide be sure to continue the heating of the crystals until all the fumes have been driven off. During this process, stir it continuously to expose all the material.

When in this fluid state, the substance has a remarkable property. It will dissolve a long strip of thin paper, making it disappear as it is fed into the liquid. The amateur chemist can amuse his friends by preparing a small quantity of the liquid iron chloride and feeding two or three feet of tissue paper into the beaker. Bit by bit, the long strip will be consumed. Then if the solution is poured into a large quantity of water, the paper will reappear as small hairlike particles.

Small iron objects can be coated with copper in the home laboratory merely by immersing them in a solution of copper sulphate. The iron is said to be plated by immersion to distinguish it from the coating obtained by electroplating. Unfortunately, the coating is extremely thin and soon disappears.

NOT every iron surface will exhibit this property, however. Armed with a few simple chemicals, the amateur can treat the surface of a piece of iron to prevent the formation of the copper coating.

First, clean the strip of iron thoroughly with sandpaper and immerse it in nitric acid until the evolution of reddish-brown gases indicate that the iron is being attacked. Then remove the iron, wash it in water, dip it in a solution of potassium dichromate, and wash it again. The iron then is in a passive state, the treatment tending to alter the surface iron. If the strip is immersed in the solution of copper sulphate, no coating of copper will be deposited on its surface. As only the surface of the iron is changed, however, it can be brought back to normal by striking it a blow or scratching it with a sharp pointed instrument. The blow or the scratching breaks the passive skin effect and again causes the copper to be deposited where the skin has been broken.

This peculiar quality makes it possible for the amateur chemist to perform a surprising experiment. Treat the surface of a strip of iron as described so it is in the passive state. Then, using the sharp point of a nail, write your name on the surface of the strip. The passive skin effect will be broken where the point of the nail touches the surface and, by immersing the strip in copper sulphate, the words will be made visible by the line of copper deposited. The use of chromates and dichromates to protect the surface of iron from rust and corrosion is put to practical use. Another method of protecting iron, somewhat similar to the method of obtaining surface passivity, is called “parkerizing.” It consists in causing the surface of the iron to become coated with a thin layer of phosphate of iron. One simple way of doing this is to heat, in a solution of phosphoric acid, the iron that is to be corrosion-proofed. The home chemist can park-erize in a small way by dipping the iron into the ordinary phosphate solution used at soda fountains.

SINCE iron combines readily with oxygen to form iron oxide, it would seem logical to suppose that iron oxide could be reduced to form iron. This is true. In fact, this is what is done when iron is obtained originally from the iron ore. Iron oxide (iron ore) is heated in a large blast furnace with carbon in the form of coke. The carbon combines with the oxygen in the iron oxide, leaving pure iron. A process of this type is called reduction; the iron oxide being reduced to iron.

ALTHOUGH this particular process would be too bulky to duplicate in the home laboratory, the amateur can simulate the reduction of iron oxide by using easily obtained hydrogen gas in place of the carbon. Place the iron oxide, which you obtained by heating the iron sulphate, in a non-metallic tube. Heat the tube and pass hydrogen gas through it. The hydrogen will combine with the oxygen and reduce the iron oxide to iron. If your attempt has been successful, a magnet will attract the small particles of iron formed.

The fact that aluminum also exhibits the property of reducing iron oxide to iron forms the basis of a very interesting and useful industrial process. In factories and repair shops, this simple chemical reaction is known a* the “thermit” process of iron welding. Iron oxide is mixed with aluminum and ignited. This causes the two chemicals to react and give off a great amount of heat. In fact, so great is the temperature that the iron, freed by the reaction, flows from the base of the crucible in a molten, white-hot state.

How this is used to form a weld is shown in the drawing. A mold first is made around the portions to be welded. Then the thermit mixture of aluminum and iron oxide is placed in a conical crucible fitted into the entrance gate of the mold. When the mixture is ignited by means of a strip of magnesium, the reduced iron, heated to an enormously high temperature, flows into the mold.

With some aluminum paint powder, a small amount of powdered magnetic iron oxide, and an old flowerpot, the amateur chemist can reproduce the thermit process on a miniature scale. Mix the iron oxide and the aluminum powder in the ratio of one to two and place the mixture in a three-inch flowerpot. It will be necessary, of course, to plug the hole in the base of the flowerpot.

To ignite the thermit charge, a priming starter will be needed. For this starter, the experimenter can use five parts of barium nitrate, two and one-half parts of aluminum powder, and one part of sulphur by weight. Place this in a small depression in the top of the thermit. To light the charge, use two or more large matches held in a pair of pliers.

Once started, the reaction continues with intense brilliancy and heat. Few experiments are as spectacular as the reduction of iron oxide by the aluminum in the thermit process. The mass will glow and sparks will jump as the aluminum burns by removing the oxygen from the iron oxide.

When experimenting with the thermit mixture, always work with one or two ounces of the mixture and confine the reaction to some heat-resistant and insulating receptacle like the flowerpot. Good results will not be obtained if the mixture is fired in piles as, in that case, the heat is dissipated too rapidly.