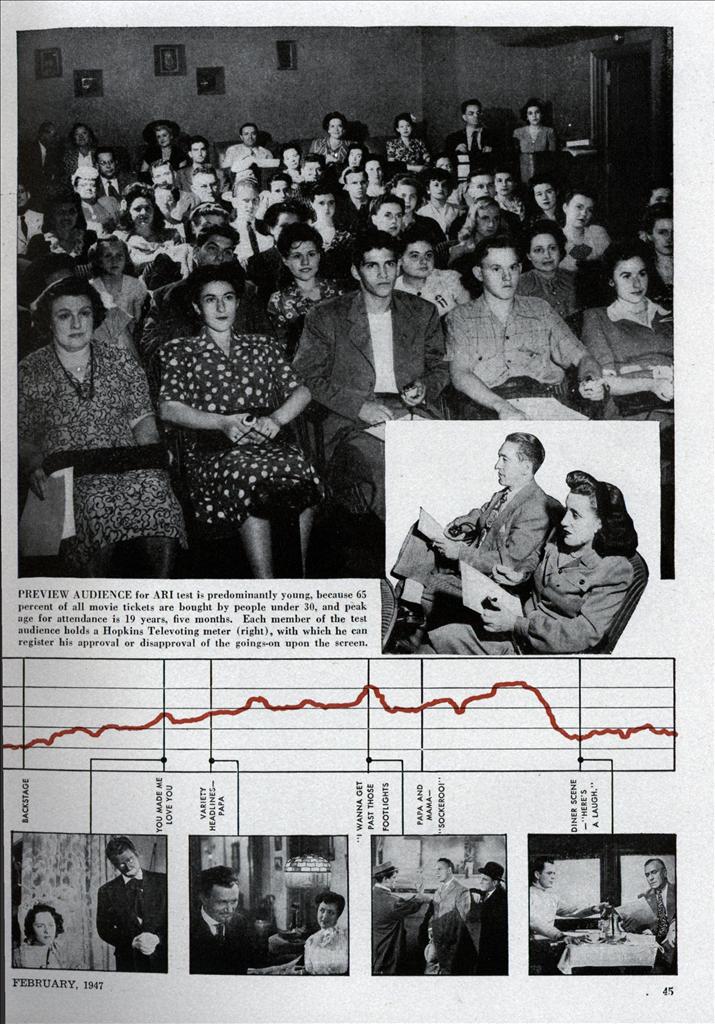 Is there a scientific method of forecasting audience reaction to a motion picture before release? “Yes,” says Dr. Frank Gallup, father of the election polls—and cites an impressive record of success for his Audience Research Inc. Certain victims of adverse conclusions say, “No. Gallup polls don’t mean a thing. They lift a manhole cover and ask a question, and right away anybody inside the manhole becomes a critic.” But this minority voice pales beside a roll call of Hollywood converts to ARI: Goldwyn, Selznick, Disney, Columbia, R.K.O., Universal, Monogram, Hal Wallis, Arnold Press-burger, Benedict Bogeaus, and (in England) J. Arthur Rank.

These are the men who shell out the money in one of the most competitive industries in the world, and they know that while quality and prestige are important, the ultimate criterion of movie success is the box office. Since industry costs are constantly rising, the movie-makers can’t afford to gamble on the pay-off.

By adapting the Gallup poll technique to the study of your movie likes and dislikes, Dr. Gallup’s pollsters can tell a producer how many people will want to see a film still in the making, how many dollars, quarters, and dimes will pour into the box office. A little figuring on a scratch pad, and they can prophesy whether a film will make a profit. So far, says Dr. Gallup, these scientific predictions have been right within 10 percent.

Basis of ARI methods is the sampler technique developed in the election polls, although the samples are usually smaller. All testing done by trained samplers using the personal-interview method in homes and offices. The movie-going population is broken down into sex, color, income, and educational groups, from which the sampler may make his own choice of individuals. As to the number, there is no constant, since the nation’s movie-going habits are forever changing. For instance, there are more men going to the movies now than at any time during the last four years, owing to the war’s end. ARI is unwilling to state the over-all size of the sampling group. However, there are sampling staffs in all cities with a population of 50,000 and up, with the rest of the country divided into population areas.

“The Jolson Story” affords a good example of how ARI works. The reviewers hailed it as one of the top box-office hits of the year, but they made their prediction after seeing the finished picture. Thanks to ARI, the producers knew it before the cameras started to roll.

First, a 60-word synopsis of the idea was presented to a cross section of moviegoers. They were asked: “Would you buy a ticket to see a movie based on the life of A1 Jolson?” The answer was “No.” Too many of the younger generation had never known Jolson in his palmier days. Then they tried again. Would people like to see a movie about the 1920’s including such songs as “Mammy,” “April Showers,” “Swanee,” and “Rockabye, My Baby”? “Yes,” said the ballots, and the picture was on its way.

Audience picks the stars Next in the ARI procedure is to find out what players moviegoers would like to see in leading roles. The right stars will greatly increase the number of I-want-to-buy-a-ticket votes. In “The Jolson Story,” no stars were used, so this part of the test was skipped. As a rule, John Q. Fan is very definite in his ideas as to who is to play the part. If Hollywood had dared put anyone but Clark Gable in the part of Rhett Butler in “Gone With The Wind,” there would have been a buyers’ strike on the part of the cash customers.

Then comes the title, which can kill off the customer interest in the picture, or help fatten it up. In this case, the titles tested were “The A1 Jolson Story,” “Minstrel Boy,” and “The Jolson Story.” Movie fans are funny about titles. For a chilling hair-raiser, they chose the innocuous “The Spiral Staircase.” But the Raymond Chandler title, “Farewell, My Lovely,” was spurned by ARI audiences in favor of the more sinister “Murder, My Sweet.”

ARI has taught Hollywood to keep away from titles that sound educational, because the public keeps away from them. On the other hand, titles with the words “love” and “strange” in them are proven magnets. A double-barreled title was “The Strange Love of Martha Ivers,” which did well, as per ARI predictions.

After the story, cast, and title are set, the Gallup organization keeps tabs on how many people have heard about the picture. At first, the public finds out from the whisper columns, then from the movie magazines. As the producer’s publicity department gets up steam, more and more people know about the film. ARI, still using the personal-poll method, keeps posted on what it terms “market-want-to-see,” and advises the producers when enough people know about the picture to insure the maximum audience.

Meanwhile, with a little mathematical hocus-pocus, Dr. Gallup makes his first estimate of what the movie will earn. From the first testings of synopsis, cast, and title, he may find that 50 percent of the people who know about the picture want to buy a ticket. Subsequently, tests reveal what percentage of the total movie public knows about the picture. If this figure turns out to be 60 percent, then 50 percent of that figure (the percentage of people who have been directly told about the picture, and say they want to buy a ticket to it) is the “market-want-to-see.” In this case, it was 30 percent of the total movie-going population.

Scene-by-scene reaction When ARI finds the “market-want-to -see too low, it advises the producer to hold up the picture until stepped-up advertising has reached more people. In the case of “The Jolson Story, ARI counseled a strenuous publicity campaign, based not on the plugging of Jolson himself, but on his times and songs.

As the finishing touches are put on the picture, ARI is in on every step, but its most important contribution is “profiling.” Having determined by ballot the number of “want-to-see’s” and “don’t-want-to-see’s,” ARI chooses a preview audience according to that percentage. It does not know the names of the individuals, who are picked by trained samplers using the same methods as in the original tests.

The true cross-section audience is then called together. In large cities, the picture is shown in the company’s screening room; in small-town areas, in off hours of local movie houses. Each spectator is handed a Hopkins Tele-voting meter, a mechanical marvel which has a dial marked: “Like very much,” “Like,” “Dislike,” “Dislike very much.” He registers his reaction to each scene by moving the indicator to the position that expresses his reaction. The separate reactions of the audience are transmitted to the master mind of the Hopkins machine, which averages them. What comes out of the machine is a “profile” showing how the audience likes each scene, each speech, each song. Then the editors go to work. What the test audience didn’t like may end up in the wastebasket.

These preview tests also cue the advertising of the picture. From the reactions of the preview audience, the ballyhoo boys can tell whether the most popular feature of their picture is the story, the stars, the music, or the Technicolor. By following ARI pointers, they can write advertising that will hoist the “market-want-to-see” many notches.

Most important of all, the preview tests tell how the public will react after the picture is shown. In the case of “The Bells of St. Mary’s,” the preview audience reaction enabled ARI to predict that word-of-mouth publicity would be unusually favorable. They were right. People who saw the picture told their friends not to miss it, and the MWTS climbed.

They predicted a similar future for “The Jolson Story,” though to a lesser degree. But they expected that after the New York run at Radio City Music Hall, more and more people all over the country would hear about the picture’s success in New York, and would want to see it.

ARI could have been wrong about “The Jolson Story.” Sitting in their offices in Princeton, New Jersey, they may possibly miss somewhere in their doping of the public taste. They had missed before. They underestimated “Kitty Foyle” and “How Green Was My Valley.” They thought “Adventures of Mark Twain” would do better than it did. But of the 5,000 film ideas they have tested, and the 900 pictures they have worked on, they have a high batting average. Which is why major Hollywood studios use this scientific cue for gambling on the movies, [end]