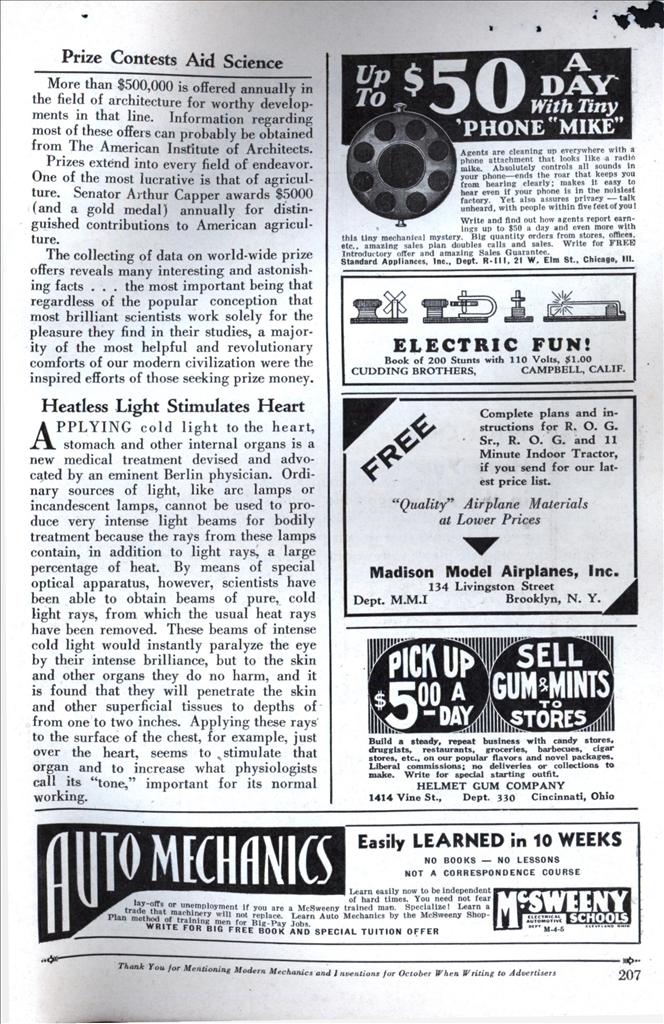 Prize contests are always staged in the hopes that some definite object will be attained, whether it be increased business or the perfection of some scientific or mechanical achievement. In this article the world’s foremost authority on prize contests tells how these have aided science.

IT IS popularly conceived that prize competitions are conducted exclusively for the literati, or for those who enjoy solving puzzles and similar pastimes. Few persons realize that the history of scientific achievement is crammed with exploits of those who were inspired by monetary awards, which were nothing more or less than prize competitions.

One of the first great men to recognize the compelling influence of prize awards was Napoleon Bonaparte. In 1795 he offered through the French government a prize of 12,000 francs (about $2400, a fabulous sum in those days) for “the most practical method of preserving foods for sea service and military stores.”

Nicholas Appert of Paris was inspired by Napoleon’s offer. He worked on a process of canning food from 1795 until 1804, when he had perfected it sufficiently to stage a public demonstration attended by distinguished scientists from all parts of the world. It is said that Appert “enclosed food, after heating it, in a glass bottle which was then corked and subjected to the action of boiling water. The bottle was placed in a water-bath and was gradually heated for varying lengths of time, depending upon the character of the food.”

In 1809 Appert submitted his treatise on preserving food to the French government. The prize was awarded him in 1810. The indirect outcome of Napoleon’s offer was the TIN CAN. It is claimed that: “No single discovery has contributed more to modern food manufacture, or the general welfare of mankind.”

In 1807, three years following Appert’s public demonstration, Thomas Sad-ding read a paper entitled: “A Method of Preserving Fruits Without Sugar for the House and Sea Stores”, before the London Society of Art. For this Sadding was awarded a small cash prize.

Shortly afterwards, with the data and help of Appert and Sadding, Peter Durrand obtained a patent in England for preserving meat, fruit and vegetables in tin cans. For this he has been called “The Father of the Tin Can”, although credit might be given Napoleon, whose prize offer inspired Appert to develop the process patented by Durrand.

Prize awards and the competition they stimulate, have played a potent part in the development of many other great industries.

The most important of these is in the field of transportation. One of the earliest steam locomotives was constructed as the result of a prize competition.

The contest was sponsored by the Liverpool and Manchester Railroad, which was opened in 1830. Here the first high – speed locomotive of the modern type was invented and constructed. The directors offered a prize of £500 ($2500) for the best engine, and trials were held on a finished portion of the line at Rainhill on October 8th, 1829. Three engines participated—the “Rocket” of George and Robert Stephenson; the “Novelty” of John Braithwaite and John Ericsson; and the “Sanspareil” of Timothy Haokworth.

The last two mentioned broke down at the trial, but the “Rocket” fulfilled the conditions and won the prize.

The “Rocket” possessed the three efficient elements of the modern locomotive—the internal water-surrounded fire box and the multitubular flue in the boiler; the blast-pipe, by which the steam after doing its work in the cylinders was exhausted up the chim- ney, and thus served to increase the draught and promote the rapid combustion of the fuel; and the direct connection of the steam cylinders, one on each side of the engine, with two driving wheels mounted on one axle.

In 1831, two years after Stephenson’s “Rocket”, the Baltimore & Ohio Company offered a prize of $4,000 for an American built engine weighing three and a half tons, able to draw 15 tons at 15 miles an hour on the level. This award was won by the “York” of Messrs. Davis and Gartner in the following year. These prize competitions demonstrated the feasibility of steam locomotion as applied to transportation.

In 1810 Napoleon Bonaparte inaugurated one of the greatest prize contests in history by offering one million francs (about $200,-000.) to any inventor who could devise machinery for the spinning of flax yarn. Philippe de Girard was inspired by this lucrative prize and within a few weeks after its announcement he patented an invention for spinning flax by both dry and wet methods. His invention, however, did not receive the promised award which was ignored altogether in France, his native country.

One of the earliest aeroplane engines was constructed as the result of a 100-pound ($500.) offer of the Aeronautical Society of Great Britain, for the lightest and most compact motor shown at their exhibit at the Crystal Palace, London, in 1868. This was won by Stringfellow, who built his first successful flying model in 1847. A second model, constructed in 1868, was exhibited at the show and won the prize.

In September, 1901, A. Santos Dumont won a prize amounting to $20,000 offered the first aviator to circle the Eiffel Tower in Paris with a heavier-than-air flying machine mechanically propelled.

On the 27th of October, 1906, Henry Far-man flew a distance of nearly half a mile at Issy-les-Molineaux, and on the 13th of January, 1908, he made a circular flight of one kilometre, thereby winning the Deutsch-Archdeacon prize of 2000-pounds, ($10,-000). The engine was an eight cylinder Antoinette motor, developing 49 horsepower at 1100 revolutions per minute, and driving directly a single metal screw propeller.

The advancement of weapons of war has been fostered by prize _ competitions. In 1852 the British government awarded M. Minie, 20,000-pounds (about $100,000) for a new type of expansive bullet, adaptable to army service rifles. In 1857 Mr. Greener received a prize of 1,000-pounds ($5,000) for the “first public suggestion of the principle of expansion” as applied to bullets. In 1867 Mr. Pritchett was awarded 1000-pounds ($5,000) for a bullet capable of being made into cartridges and lubricated for the Minie rifle. In 1875 Pape of Newcastle was awarded a prize for the invention of choke-boring . . . the constriction of the barrel of a rifle near its muzzle, increasing bullet’s velocity.

Following a disastrous shipwreck a quarter of a mile from South Shields, England, in 1789, a committee of inhabitants from this town offered a cash prize for a model of a lifeboat. An inventor named Greathead built the first actual lifeboat, naming it “The Original.” In 1789 another ship was wrecked near South Shields in almost the same spot, and “The Original” brought everyone to safety, whereas the year previous all had perished within sight of the shore.

In 1827 the Societe d’Encouragement of France offered a prize for a turbine motor which would be an improvement on certain wheels then in use for the conversion of water power. The prize was awarded Benoit Fourneyron whose turbine, but little modified, is still constructed.

This dissertation might be continued indefinitely. It will be remembered that the first trans-Atlantic flight in 1919 was inspired by the promise of $50,000 by a London newspaper. Eight years later our own Lindbergh captured $25,000 and the hearts of all the people of all nations when he landed at Le Bourget field. These facts prove conclusive- ly that the development of all phases of science has been due in many ways to the promise of prize money.

The recent offer of a $100,000 prize by the Guggenheim Foundation resulted in important steps toward the manufacture of safer and better aircraft.

Several museums through the United States have combined in offering prizes aggregating $50,000 to the discoverer of a well-preserved mastodon carcass frozen solid in the ice. This offer has spurred hundreds of intrepid adventurers to mush into north-lands, there braving hardship and deprivation . . . with a fortune at stake!

Throughout the ages prizes have been offered for brilliant discoveries in the field of mathematics, which awards have spurred countless brilliant minds to devote whole lifetimes to this absorbing study. The writer has before him an unconfirmed rumor that the French Society of Science offers a prize of 50,000 francs to the mathematician who can “square a circle”.

Everywhere in the world philanthropic institutions, scientific societies, colleges, universities, museums, publishers and business men, are offering awards which may be conservatively estimated to approximate over $10,000,000 at the present time for scientific accomplishments, the results of which will materially add to the comfort, welfare and scientific knowledge of modern civilization. No other stimulus throughout the ages has given more zest to scientific research than the lure of wealth in the form of monetary” awards for brilliant exploits and discoveries in the field of science.

Modern Mechanics and Inventions is but one magazine in the field of scientific and semi-scientific periodicals published throughout the world. These, as a group, have probably done more in recent years to enthuse embryo inventors and scientists to greater exertion through the offering of cash prizes for scientific achievements and the dissemination of news of scientific prize offers than any other single source.

Prizes are and have been offered during the past 100 years for devices making for safety at sea. Seven such awards are now offered by publications and maritime organizations in various parts of the world.

More than $500,000 is offered annually in the field of architecture for worthy developments in that line. Information regarding most of these offers can probably be obtained from The American Institute of Architects.

Prizes extend into every field of endeavor. One of the most lucrative is that of agriculture. Senator Arthur Capper awards $5000 (and a gold medal) annually for distinguished contributions to American agriculture.

The collecting of data on world-wide prize offers reveals many interesting and astonishing facts . . . the most important being that regardless of the popular conception that most brilliant scientists work solely for the pleasure they find in their studies, a majority of the most helpful and revolutionary comforts of our modern civilization were the inspired efforts of those seeking prize money.