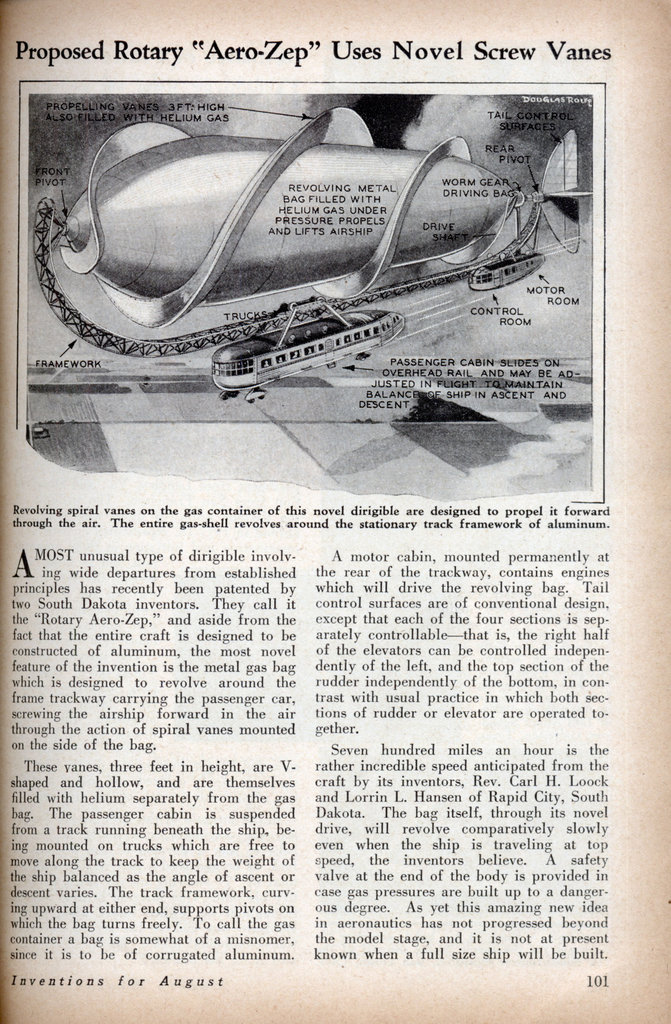 A MOST unusual type of dirigible involving wide departures from established principles has recently been patented by two South Dakota inventors. They call it the “Rotary Aero-Zep,” and aside from the fact that the entire craft is designed to be constructed of aluminum, the most novel feature of the invention is the metal gas bag which is designed to revolve around the frame trackway carrying the passenger car, screwing the airship forward in the air through the action of spiral vanes mounted on the side of the bag.

These vanes, three feet in height, are V-shaped and hollow, and are themselves filled with helium separately from the gas bag. The passenger cabin is suspended from a track running beneath the ship., being mounted on trucks which are free to move along the track to keep the weight of the ship balanced as the angle of ascent or descent varies. The track framework, curving upward at either end, supports pivots on which the bag turns freely. To call the gas container a bag is somewhat of a misnomer, since it is to be of corrugated aluminum.

A motor cabin, mounted permanently at the rear of the trackway, contains engines which will drive the revolving bag. Tail control surfaces are of conventional design, except that each of the four sections is separately controllableâ€”that is, the right half of the elevators can be controlled independently of the left, and the top section of the rudder independently of the bottom, in contrast with usual practice in which both sections of rudder or elevator are operated together.

Seven hundred miles an hour is the rather incredible speed anticipated from the craft by its inventors, Rev. Carl H. Loeck and Lorrin L. Hansen of Rapid City, South Dakota. The bag itself, through its novel drive, will revolve comparatively slowly even when the ship is traveling at top speed, the inventors believe. A safety valve at the end of the body is provided in case gas pressures are built up to a dangerous degree. As yet this amazing new idea in aeronautics has not progressed beyond the model stage, and it is not at present known when a full size ship will be built.