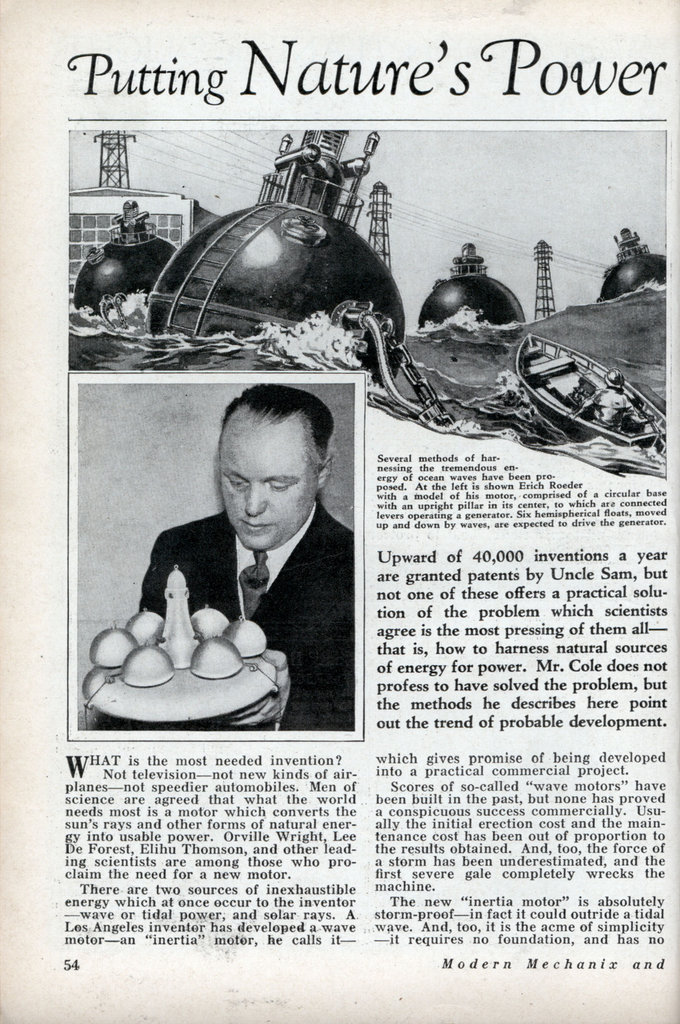 There are two sources of inexhaustible energy which at once occur to the inventor â€”wave or tidal power, and solar rays. A. Los Angeles inventor has developed a wave motorâ€”an “inertia” motor, he calls itâ€” which gives promise of being developed into a practical commercial project.

Scores of so-called “wave motors” have been built in the past, but none has proved a conspicuous success commercially. Usually the initial erection cost and the maintenance cost has been out of proportion to the results obtained. And, too, the force of a storm has been underestimated, and the first severe gale completely wrecks the machine.

The new “inertia motor” is absolutely storm-proofâ€”in fact it could outride a tidal wave. And, too, it is the acme of simplicity â€”it requires no foundation, and has no connection with the ocean bottom except by its anchor chains.

A study of the accompanying diagrams makes it clear how the inertia motor operates. If you are mechanically minded, you will be impressed. The application of the name “inertia” will be obvious. When a wave starts to lift the hollow sphere, the massive weight inside, because of its inertia, resists the movement and exerts terrific pressure in the lower cylinder. Finally the inertia of the weight is overcome. Then it possesses momentum. When the sphere reaches the crest of a wave, the combined effort of the momentum and the recoil of the huge, semi-elliptic springs exerts an equal pressure in the upper cylinder. The tremendous pressure is applied to oil, which, in turn, operates a special turbine which runs a generator. The current is conducted to the shore by submarine cable.

The idea seems wholly practical. It is readily conceivable that a battery of “inertia motors” could be built into an elongated float set parallel with the wave movement, and power in unlimited quantities would be available.

The cost of building these motors would not be excessiveâ€”the maintenance cost is almost nilâ€”the storm hazard is eliminated. Collision is the greatest hazard, but this is hardly worth considering as the float would have “running lights” at night.

A conservative estimate of the cost of the complete installation, except batteries, indicates that the value of the current generated, at 5c K.W. hour, would equal the installation cost in 18 months.

The power available from ocean waves is unbelievably huge. Suppose a wave comes along and lifts a 25,000-ton ocean liner 10 feet in 5 seconds. How much power is expended? The 25,000 tons is equivalent to 50,000,000 pounds; which, raised 10 feet, represents 500,000,000 foot pounds. Since this work is performed in 5 seconds, the amount done in one minute would be six billion foot pounds. One horsepower is that required to perform 33,000 foot pounds per minute, so simple division gives the wave’s horsepower as 181,818!

Every day in the year the sun is dissipating incalculable, immeasureable energy upon this earth of ours, energy which can be brought directly under control for immediate use, instead of waiting for a new geological era to make it available. The trapping and utilization of solar energy is not newâ€””solar engines” have been built beforeâ€”but direct, commercial application of solar energy for power conversion has not been achieved.

An idea for a sun-power plant, illustrated in these pages, seems to be in a fair way to achieving success. A drawing shows the theoretical working of the solar power plant. One side of the unit is a tank containing water, heat insulated on all sides. On top of the tank is a shallow basin of greater area than the cross-section of the tank itself. This basin is covered with a layer of sheet copper providing a space of about one inch within the basin. Water from the tank enters the basin at the center point and spreads out to the rim where it is returned to the tank.

The top of the copper covering is painted flat black. Obviously when this tank is exposed to the glaring sun, the black surface absorbs the heat which is communicated to the water in the shallow basin. The entire mass of water is sealed from the atmosphere, and evaporation, which would tend to cool the water, is prevented. The thin layer of water becomes very hot and is carried into the main tank. The circulation goes on and on, constantly building up the temperature in the main tank. The heat insulation prevents radiation losses. In a working model, the temperature was built up to 180 degrees.

We have now established a mass of hot water. Now for the cold element. The tank at the right is the same volume and is insulated the same as the “hot” tank. In this case the water is circulated to an evaporation cooling system. This consists of a shallow upper tank from which are suspended many sheets of a special flax fabric such as desert water bags are made of. The water trickles down these. This cooling system will maintain the temperature of about 60 degrees in the cooling tank.

We now have established a heat differential of nearly 100 degrees. The boiler and the condenser are an innovation. Note that each is set in the water of their respective tanks. The system is synonymous with placing a conventional boiler in a mass of molten lava. The boiler-condenser system is partly filled with pure, distilled water. The initial vacuum is established by injecting live, super-heated steam into the system. Then the cocks are closed, and when the steam condenses a permanent vacuum is established. Thereafter the boiler vaporizes a vast amount of water; the condenser liquefies the vapor; an injector pump returns the water to the boiler; an eternal cycle going on continuously, while between the two, a low pressure steam turbine converts the energy into terms of kilowatts.

Let us now transpose our theory into commercial terms. Southern California offers some ideal locations for a solar power-plant. Almost any point along its coast would meet the physical requirements, but Salton Sea, at the north end of Imperial Valley, is most ideal. Here the mid-day sun gives rise to temperatures of 110 to 120 degrees. And, too, the air is very dry which adds to the efficiency of the cooling system.

The initial cost of erecting a power-plant like this would not be prohibitive. Even if it cost twice as much as a conventional steam plant of the same power output, this would be more than offset in several years by lower upkeep cost. The solar plant could be made so automatic in operation that it would require practically no attention.

Practically the only upkeep cost of this solar distillation plant is for fuel for a small gasoline motor which operates two pumps; one for pumping the distilled water to the storage tank, and the other for maintaining the salt water in the evaporation basin. A surplus of water must be provided to the evaporation basin to prevent crystallization, and, too, the basin must be thoroughly flushed out occasionally.

Still a third apparatus, deriving its power from running water rather than wave motion, has been built by an Arizona rancher. A main irrigation canal bordered his land, with a flow of 8 m.p.h. He constructed a raft with four 18-inch spiral rotors underneath, linked the driveshaft of each to a common shaft which drove a 32-volt generator. The motor functions with perfect satisfaction and supplies all the current consumed on the ranch. One of the accompanying drawings makes its construction clear. A similar machine can easily be constructed by anyone.

A momentum motor of this type has infinite possibilities. Imagine one with a battery of 20 spiral rotors 30 feet in diameter set in “the narrows” of the Bay of Fundy with its 60-ft. tides! Or in the St. Lawrence River or at Sault Ste. Marie! Or at numerous points in the Ohio, Missouri, Mississippi or Colorado Rivers! A momentum motor set in the Golden Gate at San Francisco without in any way impeding navigation, would develop enough power from the inflowing and outflowing tides to supply electricity to all the bay cities. As long as the tides ebb and flow, our supply of electricity will be assured.

On all sides we see examples of wasted energyâ€”power! Think of what is wasted every day by the millions of automobiles and other moving vehicles. In an automobile, heat, the very essence of power, is wilfully wasted in enormous quantitiesâ€”in the radiator and out through the exhaust pipes.

Suppose a coil of copper tubing were placed inside the exhaust manifold, and a highly volatile liquid, as ether or alcohol, were injected into this coil, wouldn’t the expanded vapor run a fairly sizeable “steam” engine? And couldn’t the vapor be condensed in a special radiator and be used over and over?

What about the energy wasted when the brakes are appliedâ€”dissipated in friction? Cruising along at 30 m.p.h.â€””Stop” signâ€” on with the brakes. Twenty to fifty horsepower gone beyond recall.

Suppose instead of friction brakes, electrical brakes were used, and the current generated were stored in batteries, how much wasted energy could be saved?

Of course, with fuel at a reasonable price, it is not practical to make the elaborate installations necessary for conserving the wasted energy. We have one outstanding example of its being done. On the electrical section of the Chicago, Milwaukee & St. Paul railroad, when a train goes down the long grade over the Cascade mountains, the motors are converted into generators and serve as electric brakes, and at the same time push considerable current back into the line, which is utilized by another train coming up the grade. Trains are scheduled to take advantage of the electrical counterbalance.

Heat is usually associated with all motors and engines. Somewhere in the scheme of things heat has played a part. But the generally accepted idea is that abnormal heat is required, as in the steam engine and internal combustion motor. The fact of the matter is that potential power exists wherever two masses of different temperature are available. Dr. Georges Claude demonstrated this with his remarkable vacuum, or low pressure steam turbine, down on the coast of Cuba, described in a past issue of Modern Mechanics and Inventions.

Much has been written about atomic power, the tremendous energies compacted within the atom being depicted as capable of furnishing all the power the world will ever need for billions of years. This is undoubtedly true, but scientists are by no means sanguine that a method of applying the atom’s power will ever be devised.