Popular Mechanics
Issue: Jan, 1924
Posted in: General, How to
No Comments on PUTTING THE UNITED STATES ON ACRE OF PAPER (Jan, 1924)

PUTTING THE UNITED STATES ON ACRE OF PAPER (Jan, 1924) 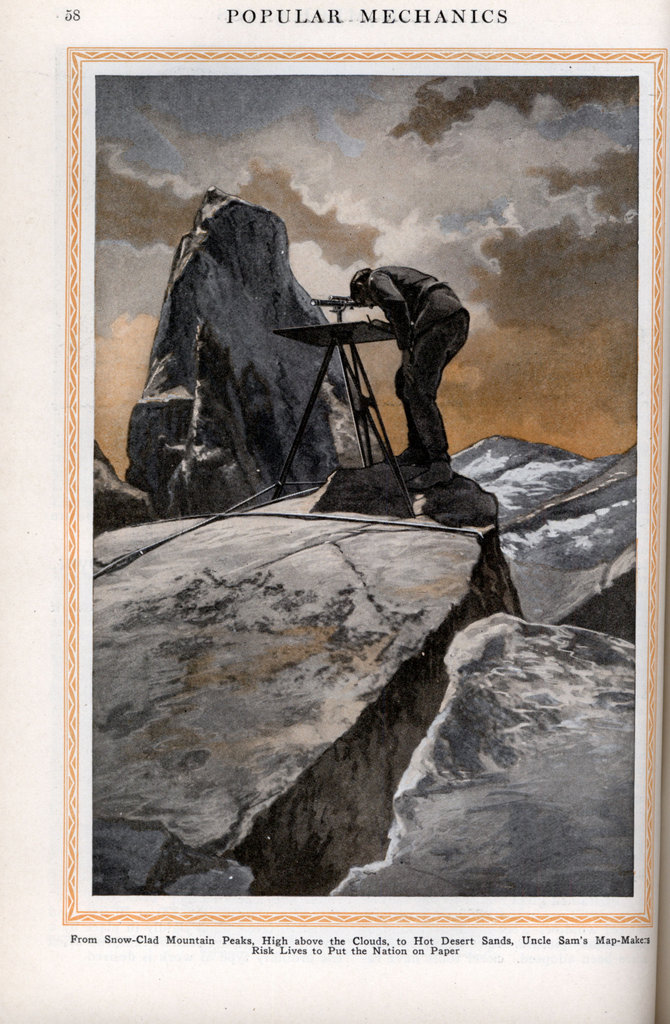 PUTTING THE UNITED STATES ON ACRE OF PAPER

SHOWING every “bump and dent” in the land surface of the United States, the largest and finest picture map of its kind in the world is in the making in Washington at a cost estimated at 100 million dollars.

It is being made piecemeal style on an extraordinarily large scale, one mile of the natural lay of the land being represented by one inch of map surface. All the integral parts of the map dovetail together like the tiles of a mosaic. One of the maps can be carried in the vest pocket, yet, if spread out and pieced together, the geographical picture of our country would cover more than an acre of ground.

The national map-makers ascend all the mountains and towering crags in the country, brave the heat of the southwestern deserts and the penetrating cold of Alaska, and perform “dare-devil” stunts close to the clouds or away below sea level as their regular daily routine. Their lives are filled with adventure and romance such as the colonial pioneers, the early California gold seekers, and other settlers of the great American wilderness of a century ago experienced.

Four hundred of the most expert topographical engineers in America with their assistants, rodmen, camp attendants, and cooks take the field from their Washington headquarters as soon as the songs of the first spring birds are heard in the latitude of our national capital. These federal scientists scatter to every section of the country, where the mapping activities are in progress. They remain afield until the appearance of Jack Frost and his colleaguesâ€”ice and snowâ€”which prevent further mapping operations. They then return to Washington, where the winter months are spent in inking in and perfecting their pencil-sketched field maps, and in supervising the engraving of ever-asting copper records of the scientific data.

Other surveying parties, which aggregate 100 topographers and their aids, are gaining complete familiarity with every square inch of land surface in Alaska. Often, these scientific scouts of the Northland work for months at a time, 300 to 400 miles from the nearest white man’s habitation. The clothes which they wear in the frosty summer are made of fur, for in the interior of Alaska, even during the season when everyone is sweltering in Chicago and New York, the mercury hovers around the zero mark.

Just to illustrate how the hazards of mapping in moderate climes are almost as dangerous as those experienced in Alaska, mention of the marvels encountered in the course of a 90-mile stretch of country in California is worth while. From the sky-high summit of Mt. Whitney, 14,501 feet above the ocean level, the experts laboriously wormed their way to safety in a risky descent. Mile by mile, they continued their painstaking survey of every hill and hollow that lay in their path until finally they came to Death Valley, a notable “no-man’s land” of the far West. Venturing the difficulties of that famed region, the map-makers began to go down hill and continued their gradual descent until they finally stood 276 feet lower than the level of the sea.

Irrespective of whether or not a mammoth mountain has previously been climbed, the government map-makers ascend to its peak, if need be. From this perilous perch, they study the lay of all the surrounding land and transfer its features to paper, using pencils with the hardest lead obtainable to make these technical sketches. Prowling predatory animals, such as grizzly bears, wolves, and coyotes, mean nothing to them. They boldly invade the secret lairs of man-killers in search of their land bump-and-dent data. They work on the Arizona desert where the heat of the sun is terrific. Along the northern border of the United States, they pursue their novel occupation under as trying temperature conditions, the mercury often standing 10 to 40 degrees below zero.

Most of the mapping work connected with the gathering of facts and figures for putting the United States on paper is, of necessity, performed on foot. Lately, however, airships have been recruited for the novel task. Flying at altitudes of about 8,000 feet, the national birdmen, by the use of specially contrived cameras, photograph the land as it streams by in panorama below. Subsequently, these films are pasted together to form a complete picture of the area as it is taken through the lens.

Approximately three centuries ago, the curious business of mapping the United States and its boundary waters was begun. John Smith, a prominent English explorer at that time, inaugurated a mapping survey of Chesapeake Bay. After several months’ work, however, his attention was diverted to other activities. Thereafter, little was done in reducing the shape and contour of the New World to parchment until after the Civil War, when Uncle Sam began to explore every hilltop and valley from Canada to Mexico, between the Atlantic and Pacific oceans.

After four decades of painstaking work, less than one-half of continental United States has been accurately charted.

Unless the mapping campaign is speeded up it will take another century of constant labor to complete the herculean task. A topographic map is a veritable crossing and crisscrossing of intersecting lines. These scientific networks are of the greatest importance to transcontinental railroad engineers and to all agencies interested in mining, commercial engineering and industry. They portray the shapes and contours of the countryside and constitute a complete dictionary of altitudes for all named and unnamed places in the entire nation.

In this great enterprise of producing a picture of the nation, the country is divided into unit areas or quadrangles, each of which is 225 miles square. Uncle Sam pays between $3,000 and $8,000 for surveying and mapping each of these portions, depending on its ruggedness of topography and degree of settlement. As each quadrangle is mapped, the resultant scientific data reproduced in map form is sold for 10 cents a copy. If a similar map were prepared and distributed by a commercial agency, the price would be many times that amount.

Three thousand quadrangles, equivalent to approximately 675,000 square miles of land and water surface, have already been mapped. These fit together like a picture puzzle. In the leading mining sections of the country, the topographic maps are made on larger and more detailed scales than most of the other regions.

The federal topographer will survey and map about one square mile of land area daily, during his field work. In the small space of one square inch, he will set down every outstanding physical, natural, and artificial feature and landmark, by the finest of hairline drawing and lettering. Thereafter, each map is engraved and printed in three colors.

Never were any valuable documents of state or nation more carefully and zealously guarded than are these precious scraps of paper which the federal map men make.

Already both the army and navy have mapped large areas by this method. While in many cases the principal elevations and depressions are shown on the photo-map, the minor changes escape. Nevertheless when the ground is level, aerial photography often becomes an invaluable aid to the topographer.