Radio Amateurs to the Rescue in Florida Hurricane (Nov, 1935) 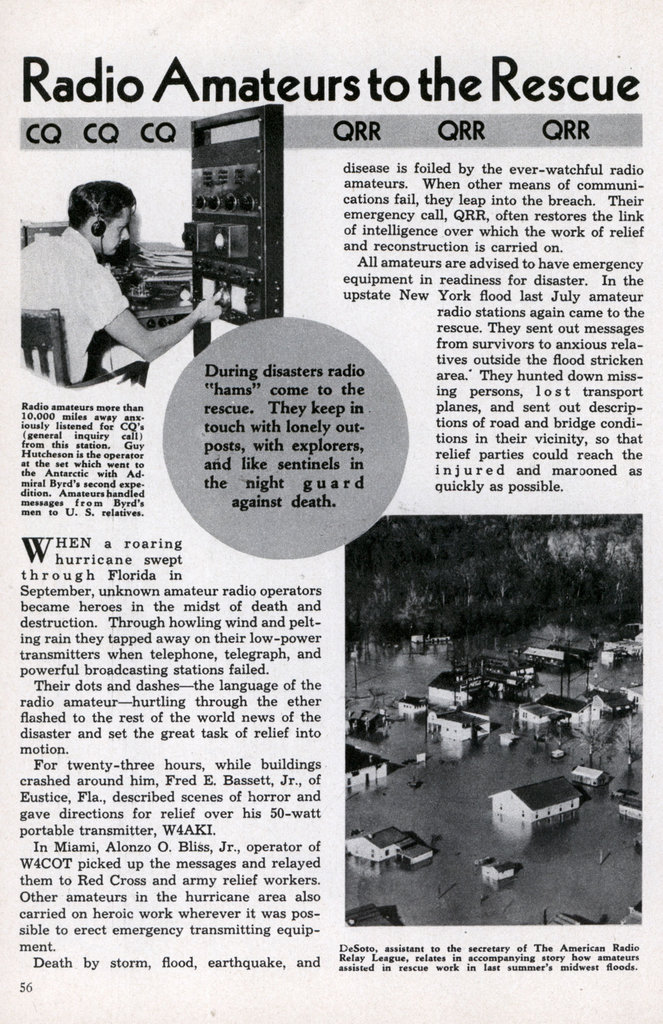 Radio Amateurs to the Rescue in Florida Hurricane

During disasters radio “hams” come to the rescue. They keep in touch with lonely outposts, with explorers, arid like sentinels in the night guard against death.

by Clinton B. De Soto

WHEN a roaring hurricane swept through Florida in September, unknown amateur radio operators became heroes in the midst of death and destruction. Through howling wind and pelting rain they tapped away on their low-power transmitters when telephone, telegraph, and powerful broadcasting stations failed.

Their dots and dashesâ€”the language of the radio amateurâ€”hurtling through the ether flashed to the rest of the world news of the disaster and set the great task of relief into motion.

For twenty-three hours, while buildings crashed around him, Fred E. Bassett, Jr., of Eustice, Fla., described scenes of horror and gave directions for relief over his 50-watt portable transmitter, W4AKI.

In Miami, Alonzo O. Bliss, Jr., operator of W4COT picked up the messages and relayed them to Red Cross and army relief workers. Other amateurs in the hurricane area also carried on heroic work wherever it was possible to erect emergency transmitting equipment.

Death by storm, flood, earthquake, and disease is foiled by the ever-watchful radio amateurs. When other means of communications fail, they leap into the breach. Their emergency call, QRR, often restores the link of intelligence over which the work of relief and reconstruction is carried on.

All amateurs are advised to have emergency equipment in readiness for disaster. In the upstate New York flood last July amateur radio stations again came to the rescue. They sent out messages from survivors to anxious relatives outside the flood stricken area. They hunted down missing persons, lost transport planes, and sent out descriptions of road and bridge conditions in their vicinity, so that relief parties could reach the injured and marooned as quickly as possible.

When floods isolated many Nebraska towns early last summer destroying communication by telephone or telegraph, five radio amateurs, Lewis Cook, A. L. Cook, Bob Mitchell, Milan Kinsey, and Brick Early, loaded the transmitting and receiving sets of station W9FWW and the portable equipment of W9EKK on a truck and set out for the stricken area to aid in the rescue work.

At Pettygrove one of the stations was rigged up and stayed on the air continually for four days and nights handling important messages. The portable station was picked up by an airplane and flown to a hill near Oxford to establish the only means of communication in the flooded area. Later an airplane dropped a tent and other equipment to the amateurs during their long vigil.

Last spring a sleet storm swept down on Duluth, Minn., on the western tip of Lake Superior. The entire city was isolated Lights, telephones, telegraph, radio broadcasting stations, all were made useless as hundreds of telegraph poles crashed under the weight of the sleet. Radio amateurs in the city immediately offered their assistance. They reached the outside world through fellow amateurs in Wisconsin and in Minneapolis and St. Paul.

These amateurs aided railroad dispatchers in locating trains which were traveling through the area without orders in danger of serious accident; they sent out emergency calls for police and sheriffs; carried news bulletins for the press associations; and cleared important messages of the business and industrial world.

Not long ago from remote Alitak, an Alaska amateur radio flashed the urgent plea to save a life. In Seattle, early that Thursday morning, Ed Stevens, owner of amateur station W7BB, heard the call for help. He engaged in conversation with the operator at Alitak, more than 1,000 miles away. At lonely Lazy Bay on Kodiak Island, five-year-old Henry Loof lay near death with appendicitis.

Stevens described the little lad’s symptoms to Dr. A. H. Seering of Harbor View hospital, Seattle. The physician diagnosed the case, gravely warned of the danger of peritonitis.

“I can’t reach Anchorage because of bad weather,” the Alitak amateur flashed back. “Please send a message to Anchorage for help,” he pleaded.

Stevens called the United States Army Alaska Telegraph, which employs both wireless and cable, and the message was relayed through to Anchorage, a circuit of 2,000 miles. Pilot Harry Blunt at once took off through the storm with Dr. A. S. Walkowsky.

Late that afternoon they reached Lazy Bay, 400 miles from Anchorage. They were in time to save the boy’s life.

There are nearly 40,000 radio amateurs in the United States alone. These amateurs are bonded together in the American Radio Relay League.