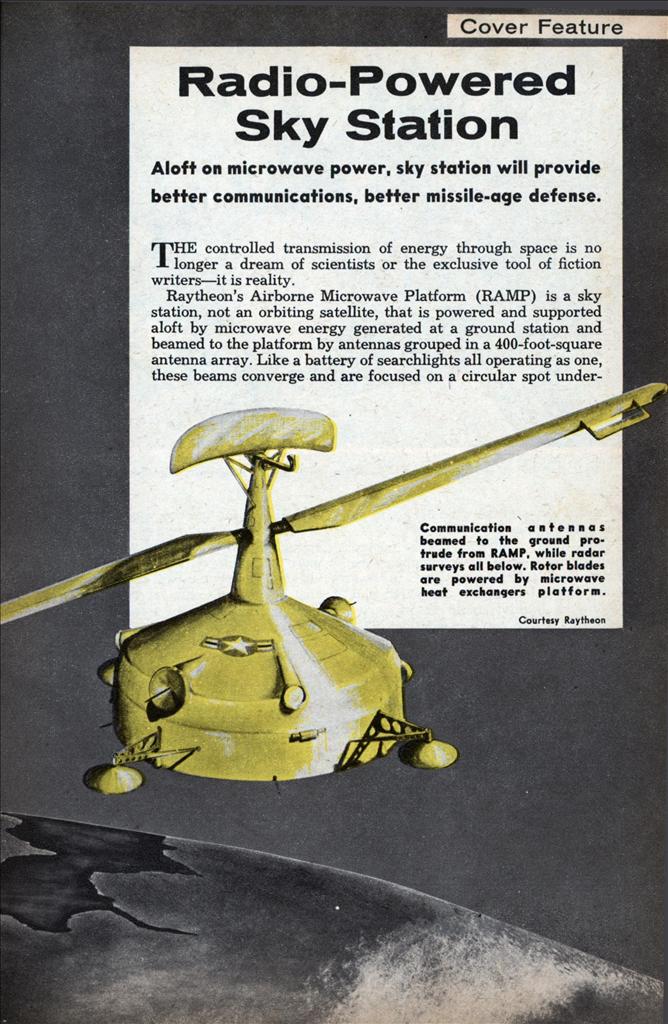 THE controlled transmission of energy through space is no longer a dream of scientists or the exclusive tool of fiction writers—it is reality.

Raytheon’s Airborne Microwave Platform (RAMP) is a sky station, not an orbiting satellite, that is powered and supported aloft by microwave energy generated at a ground station and beamed to the platform by antennas grouped in a 400-foot-square antenna array. Like a battery of searchlights all operating as one, these beams converge and are focused on a circular spot under-

neath the sky station, which is about 50 feet in diameter.

Why a sky station? The projected military and commercial capabilities are tremendous. RAMP is designed to raise itself 65,000 feet above the earth and become a highly stable “stationary” platform far above the weather. The curvature of the earth will not matter at that height.

To the average man, this would mean that he could watch the Folies Bergere from Paris, the Olympics from Europe, and other world events on his TV set as they happen. It would also mean that business and personal telephone calls and telegrams to distant points could be made at a fraction of the present rate.

A system of such platforms would act as a long-range missile alarm, guide defense vehicles (such as Bomarc anti-missile missiles), and reliably relay broadband communications and weather surveillance data to stations on the ground. The entire North Atlantic can be covered with only four such platforms. This amounts to an extension of

the DEW Line all the way to Europe.

Until recently, tubes with high enough power to keep a sky station aloft were available only at relatively low microwave frequencies. Low frequencies meant antenna arrays covering many acres would be needed to focus the microwaves on a high altitude sky station. The new Amplitron tubes now can provide power at much higher frequencies and they have the stability required to ensure an efficient, highly directional antenna pattern. This means that antennas can be brought down to reasonable size.

The Amplitron is the key to the entire project. A high-efficiency microwave amplifier tube developed by Raytheon, it can increase the microwave energy generated by the older magnetron many times. Under security wraps for many months the Amplitron’s effectiveness has been proved in the “Flight-Tracker” air traffic control system and other long-range radar systems. The heat dissipation problem has always placed severe limitations on the design of high-power

tubes, but the improved Amplitron can now handle many kilowatts thanks to new forced water cooling technology. Three-thousand megacycle tubes of 20 horsepower output are in production and units of 100 horsepower will be available shortly. Five hundred horsepower tubes are expected to be available in the foreseeable future.

The RAMP sky station has a projected 50-foot diameter (dictated by the antenna size on the underside), with a rotary wing 170 feet from tip to tip.

The circular collection antenna array on the underside is designed to pick up the microwave energy beamed from the ground and conduct it through waveguides to “lossy” elements, which convert microwaves to heat in much the same manner that a stove element converts electricity to heat. Compressed air or gas heated by the lossy elements will drive a heat engine while turbines operate the rotor blades keeping the platform aloft and supplying the power

for the electronic detection and transmitting units on board.

The received microwave energy can be efficiently converted to heat by any one of several high temperature heat exchange metals that are placed in a pipe-like waveguide, which is fed from the antenna. This is a key element of the propulsion system. When the platform is operating on microwave power, this heat exchanger performs the same function as the combustor section of a conventional gas turbine engine, which increases the work potential of the engine fluid by raising its temperature. In the combustor this is done by mixing fuel with air and burning the mixture. In the microwave heat exchanger, the same result is achieved by attenuating microwave energy, changing its form from electrical energy to thermal energy, and dissipating this heat directly to the working fluid which ultimately spins the turbine. A new Raytheon government-funded study (details still classified) is said to have conclusively licked the heat exchange problem.

Even in high winds capped by gusts up to 20 to 30 knots the chemical system could lift the platform. At low altitudes the greater air density provides a power advantage despite the fact that the rotors are geared to work best at high altitudes. The RAMP would climb to altitude in a spiral path.

The science fiction writers are hard-pressed to keep ahead of present-day scientists. Perhaps in the not too distant future we will have high efficiency Amplitron-type tubes mounted in sky stations all the while beaming power through space at the earth, providing electricity for cars, houses and factories without local wiring.