Popular Science
Issue: May, 1941
Posted in: Radio
7 Comments on Radio Spies Are Trapped by Direction Finders in Prowling Motor Cars (May, 1941)

Radio Spies Are Trapped by Direction Finders in Prowling Motor Cars (May, 1941) 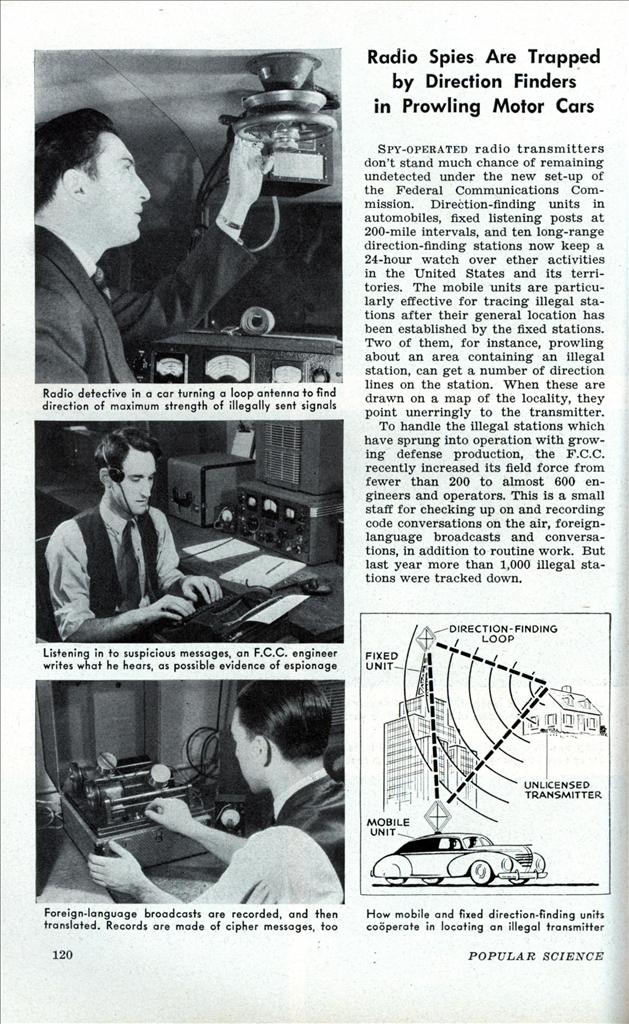 Spy-operated radio transmitters don’t stand much chance of remaining undetected under the new set-up of the Federal Communications Commission. Direction-finding units in automobiles, fixed listening posts at 200-mile intervals, and ten long-range direction-finding stations now keep a 24-hour watch over ether activities in the United States and its territories. The mobile units are particularly effective for tracing illegal stations after their general location has been established by the fixed stations. Two of them, for instance, prowling about an area containing an illegal station, can get a number of direction lines on the station. When these are drawn on a map of the locality, they point unerringly to the transmitter.

To handle the illegal stations which have sprung into operation with growing defense production, the F.C.C. recently increased its field force from fewer than 200 to almost 600 engineers and operators. This is a small staff for checking up on and recording code conversations on the air, foreign-language broadcasts and conversations, in addition to routine work. But last year more than 1,000 illegal stations were tracked down.