Cool video from the ever awesome Sixty Symbols that shows the green flash. 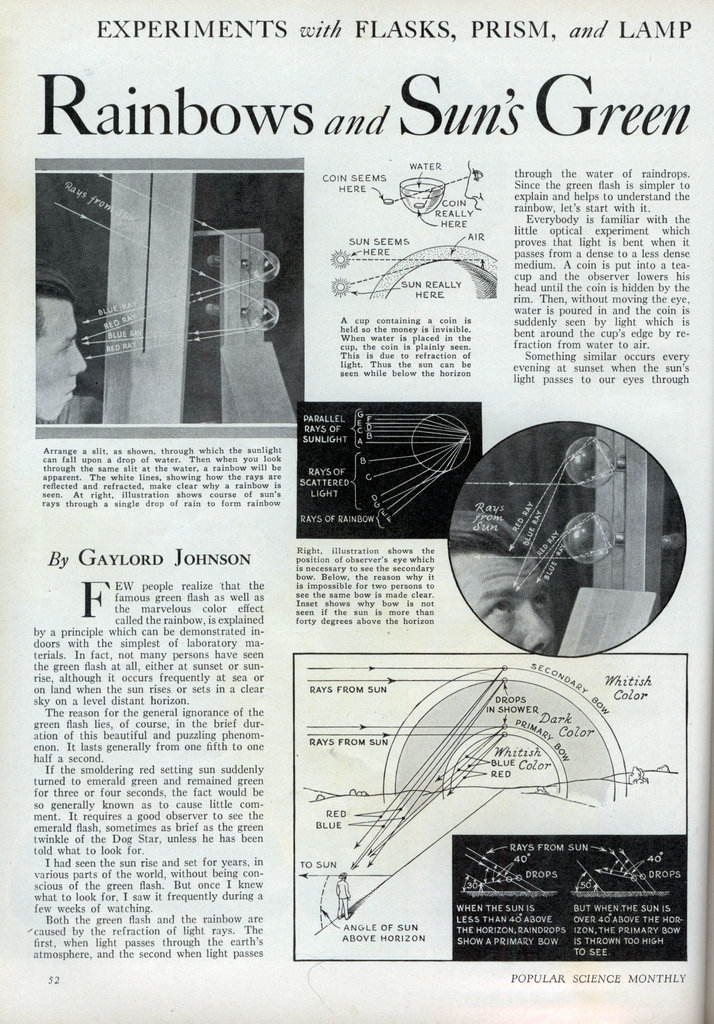 FEW people realize that the famous green flash as well as the marvelous color effect called the rainbow, is explained by a principle which can be demonstrated indoors with the simplest of laboratory materials. In fact, not many persons have seen the green flash at all, either at sunset or sunrise, although it occurs frequently at sea or on land when the sun rises or sets in a clear sky on a level distant horizon.

The reason for the general ignorance of the green flash lies, of course, in the brief duration of this beautiful and puzzling phenomenon. It lasts generally from one fifth to one half a second.

If the smoldering red setting sun suddenly turned to emerald green and remained green for three or four seconds, the fact would be so generally known as to cause little comment. It requires a good observer to see the emerald flash, sometimes as brief as the green twinkle of the Dog Star, unless he has been told what to look for.

I had seen the sun rise and set for years, in various parts of the world, without being conscious of the green flash. But once I knew what to look for, I saw it frequently during a few weeks of watching.

Everybody is familiar with the little optical experiment which proves that light is bent when it passes from a dense to a less dense medium. A coin is put into a teacup and the observer lowers his head until the coin is hidden by the rim. Then, without moving the eye, water is poured in and the coin is suddenly seen by light which is bent around the cup’s edge by refraction from water to air.

Something similar occurs every evening at sunset when the sun’s light passes to our eyes through increasingly dense layers of atmosphere. Due to the bending of the rays which this causes, we actually see the sun below the rim of the horizon after it really has set.

With this point clear, we are ready for the beautiful experiment that enables you to reproduce the green flash with an ordinary electric bulb in place of the sun and some kind of a prism to represent the earth’s atmosphere. The dangling prism, from an old-fashioned chandelier or lamp, will do perfectly.

As you raise the prism, edge up, the edge becomes the horizon below which the lamp-sun sinks. Even after this luminary is no longer seen in a direct line, it is visible by rays which are bent through the prism-atmosphere. Owing to the unequal bending of the variously colored rays by the prism, the eye really sees several closely overlapping colored images of the lamp bulb—the upper blue, the next green, and so on down to orange and red at the bottom.

As the hand of the observer continues to raise the prism, at the same time rotating it toward the eye,, the lamp is seen to become narrower and wider and the colored images disappear at the lower edge of the prism, beginning with the red and orange and finishing with the green and blue. These are the last to vanish as the hand continues to turn the prism away from the lamp, just as the green image of the sun is the last one seen when the earth’s atmosphere is turned away from the sun at sunset.

You can make the green sunset flash as short as you like by turning the prism more rapidly. By reversing the rotation, turning toward the lamp, you can duplicate the appearance at sunrise. In this case the blue and green edge of the lamp-image appears first, followed by the lamp itself and then its orange-red edge.

In this experiment, you see the blue and violet quite clearly, but in Nature these colors are quickly absorbed by their long journey through the earth’s atmosphere, leaving the more vivid green as the most prominent color to be seen in the flash.

Also, the green flash has been observed when using heliograph signals at night with artificial light, across a distance of nearly fifty miles. At this distance, atmospheric refraction carried the light over the edge of the horizon and showed the green flash at a certain point down a hillside, just below the place where the heliograph flashes were being received.

When you observe the green flash in nature, however, it is well to avoid looking too steadily at the sun until it has almost completely vanished over the horizon. Otherwise you may for some time see a complementary color image of green wherever you look, and mistake it for the true green flash.

The other color display that the sun paints is both more commonplace and more magnificent, particularly when the conditions are such that the beautiful secondary bow, with the colors reversed is formed outside the primary one.

As everybody knows, this lovely picture is painted by the sun only when it shines from behind the observer upon a curtain of falling raindrops. The sunlight falling upon each drop is bent upon entering the tiny liquid sphere above its center, is then reflected from its concave mirrorlike back and is bent again on issuing from the bottom of the drop as a band of color.

IT IS perfectly easy to see, through a simple experiment, just how this is done. Two flasks filled with water and held by an upright support, represent two greatly magnified raindrops. The sunlight, coming from behind the observer, falls upon the two flasks through a narrow slit in a cardboard screen. Through this same slit the observer looks. If you wish to try this experiment at night, a bright electric light can be substituted for the sunshine.

The diagram inset in Figure 2 traces the course of several parallel rays of sunshine on their course through the raindrops. Rays A, B, C, D are scattered after leaving the drop and, multiplied by millions, cause the whitish semi-circular area you see inside the primary bow. Ray G, bent sharply inward across E and F, also contributes to this area of scattered white light. No light is thrown outside the bow; and that is why the sky always appears darker there than inside the bow.

Rays E and F emerge more nearly parallel than any of the others. It is these that, refracted slightly, according to their wave lengths, reach the eye as the rainbow’s spectrum. The violet light, being refracted more, is thrown higher than the red, which is bent less and crosses to the eye lower.

At this point some good observer is going to object that the primary rainbow in nature has the red band outside and above, with the blue edge inside and below. This question caused me plenty of confusion when I was developing this equipment, until I remembered that the spectrum colors appearing along each spoke of the bow’s wheel are not all contributed by a single drop. We can imagine how in nature each separate shade and tint in between the red and blue is furnished by a separate raindrop, their combined colors reaching the eye as a single spoke in the complete bow’s wheel of prismatic color.

There are several other interesting stunts you can do in unscrambling the rainbow. Perhaps the best is to allow the sunlight to fall upon one of the flasks through a hole in a piece of heavy paper, upon which the complete circular spectrum cast by each rain drop is painted by the rays passing through the drop in all directions. This experiment illustrates the whitish interior area of the bow. It also shows the darker area outside the bow.

An interesting point is that each person sees his own rainbow. Your companion, standing beside you to admire the lovely spectacle, really sees a bow formed by an entirely different set of millions of drops of rain. For that matter, your left eye can never see the same bow your right one does.