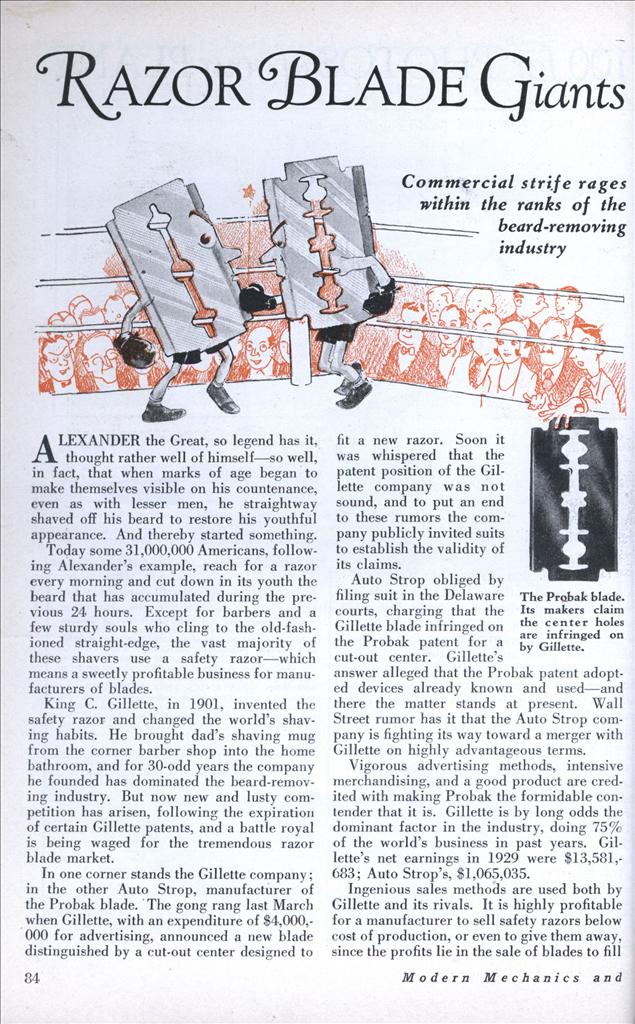 What brand of razor and blade do you prefer for your morning shave? Maybe you aren’t aware of it, but your decision as to the blade you use is helping to decide a stirring merchandise battle for control of the razor blade market. The business of removing whiskers is a big-money industry, and Gillette, long dominant in the safety-razor field, is battling a host of aggressive competitors to retain the lion’s share.

ALEXANDER the Great, so legend has it, thought rather well of himself—so well, in fact, that when marks of age began to make themselves visible on his countenance, even as with lesser men, he straightway shaved off his beard to restore his youthful appearance. And thereby started something.

Today some 31,000,000 Americans, following Alexander’s example, reach for a razor every morning and cut down in its youth the beard that has accumulated during the previous 24 hours. Except for barbers and a few sturdy souls who cling to the old-fashioned straight-edge, the vast majority of these shavers use a safety razor—which means a sweetly profitable business for manufacturers of blades.

King C. Gillette, in 1901, invented the safety razor and changed the world’s shaving habits. He brought dad’s shaving mug from the corner barber shop into the home bathroom, and for 30-odd years the company he founded has dominated the beard-removing industry. But now new and lusty competition has arisen, following the expiration of certain Gillette patents, and a battle royal is being waged for the tremendous razor blade market.

In one corner stands the Gillette company; in the other Auto Strop, manufacturer of the Probak blade. The gong rang last March when Gillette, with an expenditure of $4,000,-000 for advertising, announced a new blade distinguished by a cut-out center designed to fit a new razor. Soon it was whispered that the patent position of the Gillette company was not sound, and to put an end to these rumors the company publicly invited suits to establish the validity of its claims.

Auto Strop obliged by filing suit in the Delaware courts, charging that the Gillette blade infringed on the Probak patent for a cut-out center. Gillette’s answer alleged that the Probak patent adopted devices already known and used—and there the matter stands at present. Wall Street rumor has it that the Auto Strop company is fighting its way toward a merger with Gillette on highly advantageous terms.

Vigorous advertising methods, intensive merchandising, and a good product are credited with making Probak the formidable contender that it is. Gillette is by long odds the dominant factor in the industry, doing 75% of the world’s business in past years. Gillette’s net earnings in 1929 were $13,581,-683; Auto Strop’s, $1,065,035.

Ingenious sales methods are used both by Gillette and its rivals. It is highly profitable for a manufacturer to sell safety razors below cost of production, or even to give them away, since the profits lie in the sale of blades to fill the holders. Gillette’s latest coup is to give a new razor with one blade free with each tube of shaving cream of certain brands. Nominally the value of the razor alone is $1; in combination with the tube of shaving cream it brings 35 cents. Ten million of this combination were sold in three months in 27 states. King C. Gillette, founder of the company, has turned most of the management details over to younger officials. But his picture, appearing on every package of blades, is said to be the only portrait of an individual which can be found in every city, town, and hamlet on the globe. And it is conceded that the world owes him a vote of thanks as the man who made shaving easy and thereby relegated sideburns, goatees, walrus mustaches, and similar hirsute eccentricities into the discard. Every day the Gillette factories turn out 100,000 razors and 3,000,000 blades. If laid end to end (and that might be a good method of disposing of the old ones) the daily output would extend 71 miles. Metal used in the blades is a special Swedish steel, furnished by a Swedish concern in which Gillette is a heavy stockholder. The steel company has mine and smelting properties larger than the state of Rhode Island.

Marvelous machines punch out the steel into long strips, cut out the blades, poke through the holes in the center which are the bone of contention in the patent suit, and sharpen the edges. Each blade is individually inspected by men who are given a bonus for each faulty one discovered. Then they are packed and shipped out to distributors who place the product in one of the quarter-million retail outlets of the company.

There is plenty of competition for Gillette* outside of Probak. The whole razor blade market became something of a free-for-all scramble for business when expired patents left Gillette unprotected. Considered second in size to Gillette is the American Safety Razor company, manufacturer of Gem, Star, and Ever-Ready blades and razors. Gem has an extensive billboard and newspaper advertising campaign under way to introduce the Micromatic razor, designed to hold Gem blades and no others, and thus assure all renewal business coming to the Gem company. Other makes which have their staunch adherents are Schick, Durham Duplex, Dun-hill. Rolls and others.