RCA’s New Multiscreen TV Lets You Switch to Where the Action Is (Jun, 1970)

This reminds me of the TV sets that the President or James Bond had in movies. It really should be concealed behind some sort of rotating wet bar and make a melodic beeping noise when you press the button to reveal it. 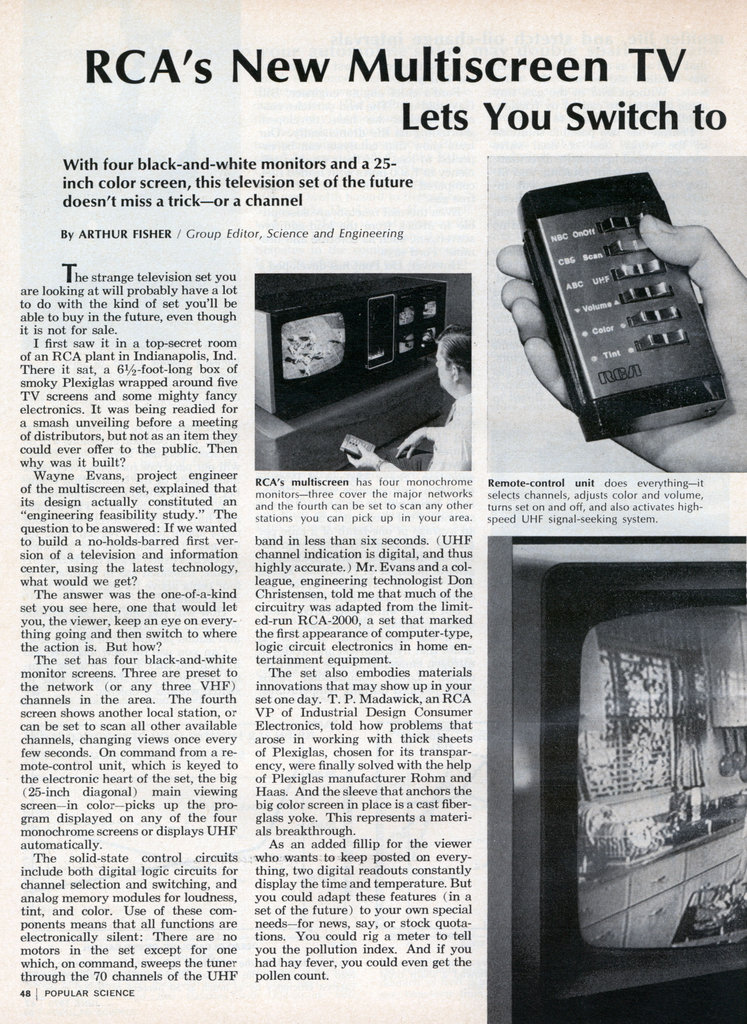 With four black-and-white monitors and a 25-inch color screen, this television set of the future doesn’t miss a trickâ€”or a channel

The strange television set you are looking at will probably have a lot to do with the kind of set you’ll be able to buy in the future, even though it is not for sale.

I first saw it in a top-secret room of an RCA plant in Indianapolis, Ind. There it sat, a 6 and a half foot long box of smoky Plexiglas wrapped around five TV screens and some mighty fancy electronics. It was being readied for a smash unveiling before a meeting of distributors, but not as an item they could ever offer to the public. Then why was it built?

Wayne Evans, project engineer of the multiscreen set, explained that its design actually constituted an “engineering feasibility study.” The question to be answered: If we wanted to build a no-holds-barred first version of a television and information center, using the latest technology, what would we get?

The answer was the one-of-a-kind set you see here, one that would let you, the viewer, keep an eye on everything going and then switch to where the action is.

The set has four black-and-white monitor screens. Three are preset to the network (or any three VHF) channels in the area. The fourth screen shows another local station, or can be set to scan all other available channels, changing views once every few seconds. On command from a remote-control unit, which is keyed to the electronic heart of the set, the big (25-inch diagonal) main viewing screenâ€”in colorâ€”picks up the program displayed on any of the four monochrome screens or displays UHF automatically.

The solid-state control circuits include both digital logic circuits for channel selection and switching, and analog memory modules for loudness, tint, and color. Use of these components means that all functions are electronically silent: There are no motors in the set except for one which, on command, sweeps the tuner through the 70 channels of the UHF
band in less than six seconds. (UHF channel indication is digital, and thus highly accurate.) Mr. Evans and a colleague, engineering technologist Don Christensen, told me that much of the circuitry was adapted from the limited-run RCA-2000, a set that marked the first appearance of computer-type, logic circuit electronics in home entertainment equipment.
The set also embodies materials innovations that may show up in your set one day. T. P. Madawick, an RCA VP of Industrial Design Consumer Electronics, told how problems that arose in working with thick sheets of Plexiglas, chosen for its transparency, were finally solved with the help of Plexiglas manufacturer Rohm and Haas. And the sleeve that anchors the big color screen in place is a cast fiberglass yoke. This represents a materials breakthrough.

As an added fillip for the viewer who wants to keep posted on everything, two digital readouts constantly display the time and temperature. But you could adapt these features (in a set of the future) to your own special needsâ€”for news, say, or stock quotations. You could rig a meter to tell you the pollution index. And if you had hay fever, you could even get the pollen count.