The headphones on the top left look like something out of Mad Magazine. 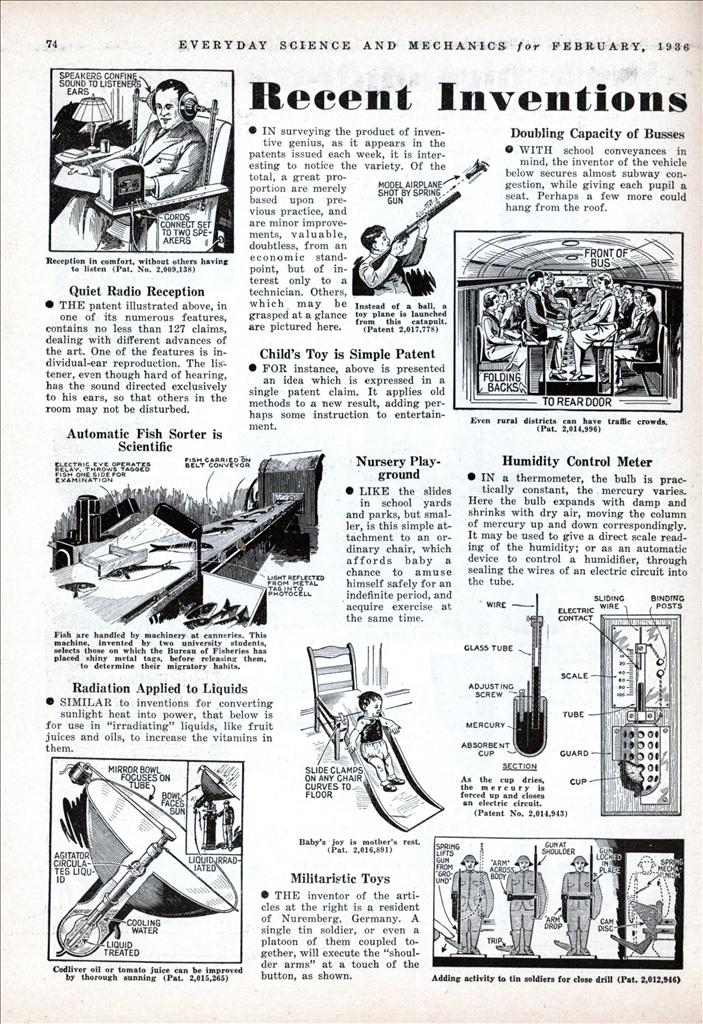 • IN surveying the product of inventive genius, as it appears in the patents issued each week, it is interesting to notice the variety. Of the total, a great proportion are merely based upon previous practice, and are minor improvements, valuable, doubtless, from an economic standpoint, but of interest only to a technician. Others, which may be grasped at a glance are pictured here.

• THE patent illustrated above, in one of its numerous features, contains 110 less than 127 claims, dealing with different advances of the art. One of the features is in-dividual-ear reproduction. The listener, even though hard of hearing, has the sound directed exclusively to his ears, so that others in the room may not be disturbed.

Fish are handled by machinery at canneries. This machine, invented by two university students, selects those on which the Bureau of Fisheries has placed shiny metal tags, before releasing them, to determine their migratory habits.

• SIMILAR to inventions for converting sunlight heat into power, that below is for use in “irradiating” liquids, like fruit juices and oils, to increase the vitamins in them.

• FOR instance, above is presented an idea which is expressed in a single patent claim. It applies old methods to a new result, adding perhaps some instruction to entertainment.

• LIKE the slides in school yards and parks, but smaller, is this simple attachment to an ordinary chair, which affords baby a chance to amuse himself safely for an indefinite period, and acquire exercise at the same time.

• THE inventor of the articles at the right is a resident of Nuremberg, Germany. A single tin soldier, or even a platoon of them coupled together, will execute the “shoulder arms” at a touch of the button, as shown.

• WITH school conveyances in mind, the inventor of the vehicle below secures almost subway congestion, while giving each pupil a seat. Perhaps a few more could hang from the roof.

• IN a thermometer, the bulb is practically constant, the mercury varies. Here the bulb expands with damp and shrinks with dry air, moving the column of mercury up and down correspondingly. It may be used to give a direct scale reading of the humidity; or as an automatic device to control a humidifier, through sealing the wires of an electric circuit into the tube.