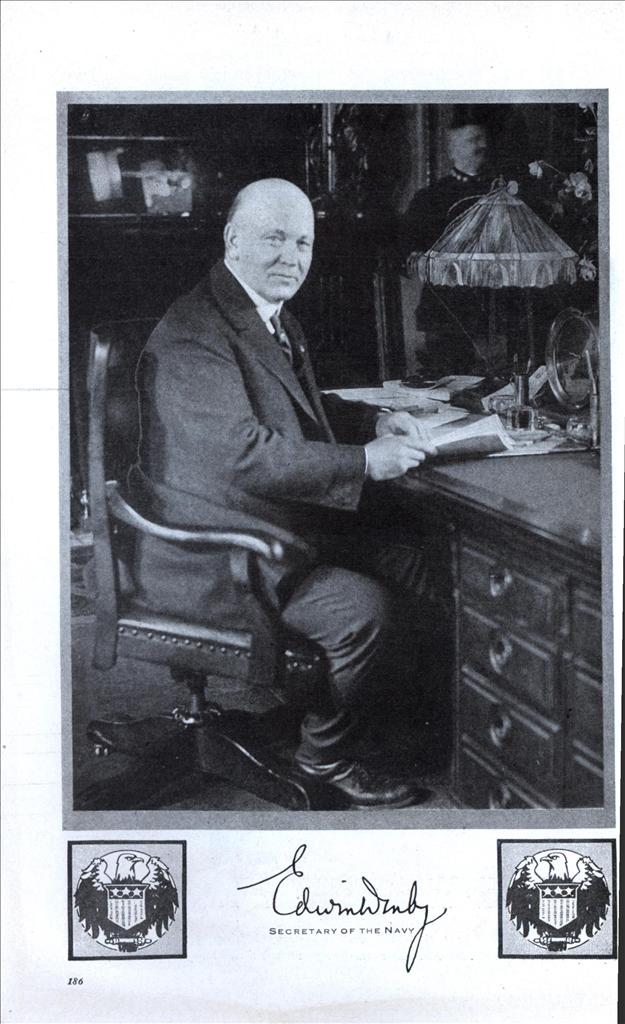 By EDWIN DENBY
Secretary of the Navy

WHEN a young American voluntarily enters the Naval Service of his country, by that act he lays aside for a while, and at all times when actually on duty, many of the rights and privileges which before as an independent citizen he was free to exercise.

As part of the contract the Navy demands that it shall be free to control his movements, to prescribe the manner in which he shall dress himself, and to exact of him instantaneous willing obedience. The contract that the young man signs is not, however, a one-sided affair.

for the Navy, in taking into the service the youth of our country, recognizes a reciprocal obligation and assumes the responsibility for his well-being. He is well fed, well housed, and always has medical attention as a matter of course, but the concern of the Navy for his welfare does not stop here.

Most of the work of an enlisted man is physical. During his hours off duty, his brain is active and his mental attitude receptive. If left to his own resources the average individual tends to fritter away his leisure time, either in useless trifling or harmful dissipation. This is where naval control continues to function, though without seeming to do so, by opening new opportunities of interest, recreation and betterment, and by pro- viding alternatives for undesirable means of relaxation.

Recreation is now recognized as a military necessity for the production of well rounded and symmetrically trained officers and enlisted men. It occupies as definite a place in the activities of the Navy as do such matters as food, clothing, medical attendance and gunnery training. This is evidenced by the fact that practically the only item of the Naval Appropriation bill just passed that was not cut down by Congress was the one which appropriates the sum of eight hundred thousand dollars for the “Recreation of Enlisted Men.”

The Bureau of Navigation in the Navy Department, which is the personnel bureau of the Navy, has charge of the important work of co-ordinating the measures to be taken to secure the contentment and provide for the amusement and recreation of the Navy men.

The Navy now owns and operates its own motion-picture exchange, which furnishes high-class, properly censored motion pictures of the latest releases to ships and naval stations. All forms of athletic sports are engaged in by both officers and men of the Navy, and it has been necessary to publish a book in order to list and keep track of the various challenge cups, trophies, championship belts, etc. It is a noteworthy fact that fourteen per cent of the men selected by the American Olympic Committee to represent the United States at the Olympic Games held in Antwerp last year were Navy men.

All ships have well-chosen libraries, containing both professional books and the latest fiction; the larger ships have bands, especially designed race boats, crew’s laundries, crew’s reception rooms, and quarters for the sick with the most modern equipment, particularly as regards operating rooms and dental offices.

The Navy believes that education makes a better man. Soon after enlistment many lads awake to a realization of the fact that if they were better educated their progress in the Navy would be more rapid, and for those who desire either to continue or improve their education the Navy offers a system of education that is based on the self-help method; it is in reality a modified correspondence course, covers a wide range of subjects, and instruction is given the students by the officers and petty officers of the ships. For those who desire to learn a trade the Navy provides thirty-one trade schools.

Much could be written also of the measures taken by the Navy to instruct the men in social hygiene; statistics show an extremely low rate of disease.

The aim of all naval training is of course to make man-of-war’s men, but should any man at the expiration of his enlistment elect to return to civil life, it is the Navy’s pride to feel that it has released a man who by his service in the Navy is a better citizen.