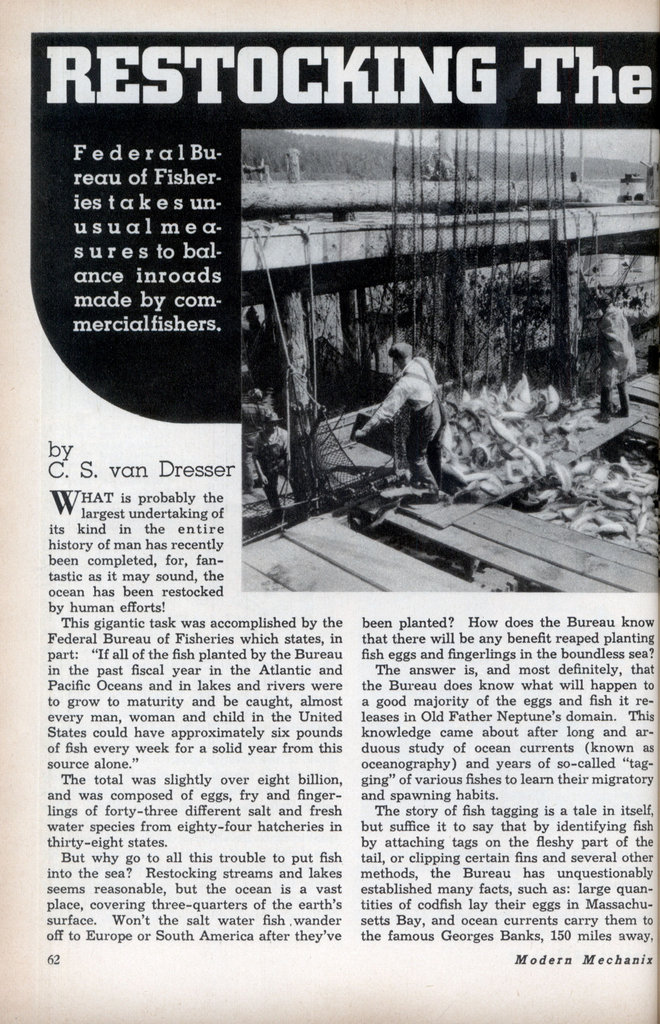 WHAT is probably the largest undertaking of its kind in the entire history of man has recently been completed, for, fantastic as it may sound, the ocean has been restocked by human efforts!

This gigantic task was accomplished by the Federal Bureau of Fisheries which states, in part: “If all of the fish planted by the Bureau in the past fiscal year in the Atlantic and Pacific Oceans and in lakes and rivers were to grow to maturity and be caught, almost every man, woman and child in the United States could have approximately six pounds of fish every week for a solid year from this source alone.”

The total was slightly over eight billion, and was composed of eggs, fry and finger-lings of forty-three different salt and fresh water species from eighty-four hatcheries in thirty-eight states.

But why go to all this trouble to put fish into the sea? Restocking streams and lakes seems reasonable, but the ocean is a vast place, covering three-quarters of the earth’s surface. Won’t the salt water fish wander off to Europe or South America after they’ve been planted? How does the Bureau know that there will be any benefit reaped planting fish eggs and fingerlings in the boundless sea?

The answer is, and most definitely, that the Bureau does know what will happen to a good majority of the eggs and fish it releases in Old Father Neptune’s domain. This knowledge came about after long and arduous study of ocean currents (known as oceanography) and years of so-called “tagging” of various fishes to learn their migratory and spawning habits.

The story of fish tagging is a tale in itself, but suffice it to say that by identifying fish by attaching tags on the fleshy part of the tail, or clipping certain fins and several other methods, the Bureau has unquestionably established many facts, such as: large quantities of codfish lay their eggs in Massachusetts Bay, and ocean currents carry them to the famous Georges Banks, 150 miles away, just in time to be hatched; that weakfish, a valuable commercial fish of New Jersey, go south to Chesapeake Bay and the Carolinas during winter to spawn; that salmon, whenever possible, return to the identical stream where they were hatched to spawn and die.

These are but a few instances of what the Bureau has learned about the habits of the denizens of the deep. So, when it plants six billion eggs and young fish in the Atlantic Ocean, you may be sure then an appreciable amount of them will end their careers in the frying pan of Mr. and Mrs. America. With rare exceptions, our native salt water fish do not leave our shores.

Backing up this statement are the scientists of the Rockefeller-endowed Oceano-graphic Institution of Woods Hole, Mass., whose studies of ocean life have extended in the Atlantic from Labrador to the Equator. They state, without qualification, that marine life hardly exists over 200 miles from shore. In other words, our salt water fishes remain close to home.

The Bureau of Fisheries scientists know where and when various fish spawn, where they migrate to (when they do migrate) and act accordingly in their vast propagation activities.

Naturally you’re not going to eat six or seven pounds of fish a week, unless you’re more than crazy about sea-food or live in Alaska. So why this extensive planting of fishâ€”the largest that the Bureau of Fisheries has ever accomplished in one year?

Take one of our best known commercial fishesâ€”the cod, for example; for the past several decades we have consumed on an average of one hundred million pounds annually of this single staple marine product and practically all of it comes from the New England region alone! That gives an idea of the amount of fish we eat. Bear in mind the dozens of kinds of fish on the market today from our diversified and many fishing grounds, and it will be readily agreed that, taking the cod as an example, the American public consumes a staggering amount of fish.

By far the greatest fisheries in the United States are those off the New England coast. They extend, roughly, from the east end of Long Island Sound to Nova Scotia and the Newfoundland Banks. These grounds are more extensively fished than any others in the entire country. Huge fleets of fishing boats leave almost daily from Boston and Gloucester, Mass., and Portland, Maine, as well as numerous smaller ports. (The fish pier at Boston is the largest of its kind in the world devoted exclusively to receiving and packing fresh fish.) The aggregate catch of these ports is colossal.

Better equipped and more numerous boats are bringing in seafood delicacies at such a rate that nature, lavish as she is, cannot keep up with the inroads man is making. Today the fishing fleets must make longer and longer trips to get satisfactory hauls. Several important species are becoming alarmingly scarce. Yet the demand for cod, haddock, flounder, mackerel and other salt water products goes on relentlessly. This depletion does not confine itself to New England alone, for, according to Bureau scientists, it is true in varying degrees in practically all of the nation’s commercial and sports fishing areas.

Perhaps the public does not realize the situation, but five years ago the Bureau of Fisheries foresaw that unless something drastic was done, our fisheries would within a short time face an economic crisis. This huge industry, with its ramifications, employing many thousands of workers, might conceivably cease to existâ€”and more than thatâ€”a tremendous source of food be denied the entire nation.

What to do? Only one thingâ€” increase the number of fish in the ocean and inland watersâ€”somewhat of a job, especially the former. Whereupon two great hatcheries of the Bureau, one at Gloucester, Mass., and the other at Boothbay Harbor, Maine, began collecting eggs from fish caught during the spawning season. Knowledge of the proper way to treat and handle the precious eggs grew with experiments, till today, the Bureau of Fisheries announces that it has planted the greatest number of eggs and fingerlings of salt water fish that it has done in any one year in its entire history.

Close to six billion potential fish dinners are now on their proper beds on the great Georges Banks and along the coast of Massachusetts and Maine, either in the fingerling and young fish state, or in the form of eggs, ready to hatch. A most stupendous accomplishment!

Cod and flounder head the list, the former with over two billion and the latter with a billion and a half. Pollock, a valued commercial fish resembling the haddock, makes its initial artificial spawning bow by placing third with over a billion. Haddock is represented by a mere 500 million, while the neglected mackerel has only an insignificant 100 million of its progeny planted on its spawning grounds. The Bureau of Fisheries feels that there will yet be a good many fish caught in the New England fishing grounds.

This unprecedented amount of eggs, with the exception of the mackerel, was planted by only two stations, the one at Gloucester producing the majority of cod and all of the pollock, while Boothbay Harbor distributed most of the flounder and has a slight edge on the haddock output. The Federal laboratory at Woods Hole, Mass., handled the mackerel eggs and young fish.

One other valuable sea-food, the shad, is drawing the attention of the Bureau for the first time. At Fort Belvoir, Virginia, the Federal hatchery obtained almost fifty million eggs, hatched them and released the resultant fry in suitable waters, mostly in Virginia and North Carolina.

In this business of planting eggs and hatching fish, man’s method has an advantage over nature’s. For this reason: There are countless fish in the sea that devour eggs and young of other fish, and in many cases, even their own. Fertilized eggs laid on the spawning grounds by any fish are open and defenseless against any marauder who wishes to make a meal out of them. Thus untold millions of them perish. In fact, scientists claim that the percentage of cod fish eggs that reach maturity can be reckoned in fractions of one percent!

The eggs hatched and raised by the Bureau of Fisheries are taken from fish already caught (the process is known as “stripping”) which, in that case, never would be deposited in the ocean, for the fish are in the holds of commercial vessels, on their way to market. Shielded from their natural enemies, the mortality of these eggs is almost nil, and especially if allowed to hatch, the chances of survival are far higher than if the parent fish were not caught and had laid the eggs in the ocean. In fact, Bureau scientists point out that this work really comes under the head of salvaging, due to the fact that without their intervention, none of the eggs would ever hatch into young fish.

Naturally, re-stocking the Great Lakes presents an easier problem. Once the fish are there, they can’t get out. The cisco (also known as lake herring), possibly considered the greatest delicacy that ever came out of the Great Lakes, once especially plentiful in Lake Erie, is not only nearing extinction, it is practically wiped out, as far as commercial fishing is concerned. And so the Bureau is trying to bring the cisco back again.

With great and painstaking effort, specialists at the Bureau hatchery at Cape Vincent, New York, succeeded in collecting a bare 2,640,000 eggs which they have planted in Lake Erie and others of the Great Lakes. Two million and a half fish may seem a fairly large number, but it is only the beginning compared to what is needed to bring the cisco catch anywhere near up to what it was two decades ago.