And if you chip some teeth off a few of the gears you end up with Momento. 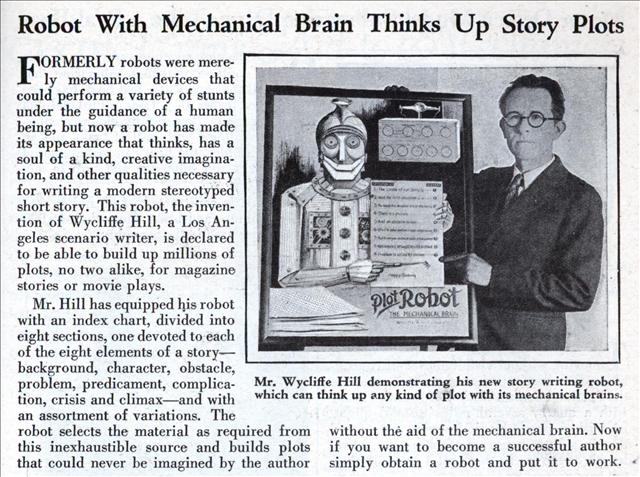 FORMERLY robots were merely mechanical devices that could perform a variety of stunts under the guidance of a human being, but now a robot has made its appearance that thinks, has a soul of a kind, creative imagination, and other qualities necessary for writing a modern stereotyped short story. This robot, the invention of Wycliffe Hill, a Los Angeles scenario writer, is declared to be able to build up millions of plots, no two alike, for magazine stories or movie plays.

Mr. Hill has equipped his robot with an index chart, divided into eight sections, one devoted to each of the eight elements of a story-— background, character, obstacle, problem, predicament, complication, crisis and climax—and with an assortment of variations. The robot selects the material as required from this inexhaustible source and builds plots that could never be imagined by the author without the aid of the mechanical brain. Now if you want to become a successful author simply obtain a robot and put it to work.