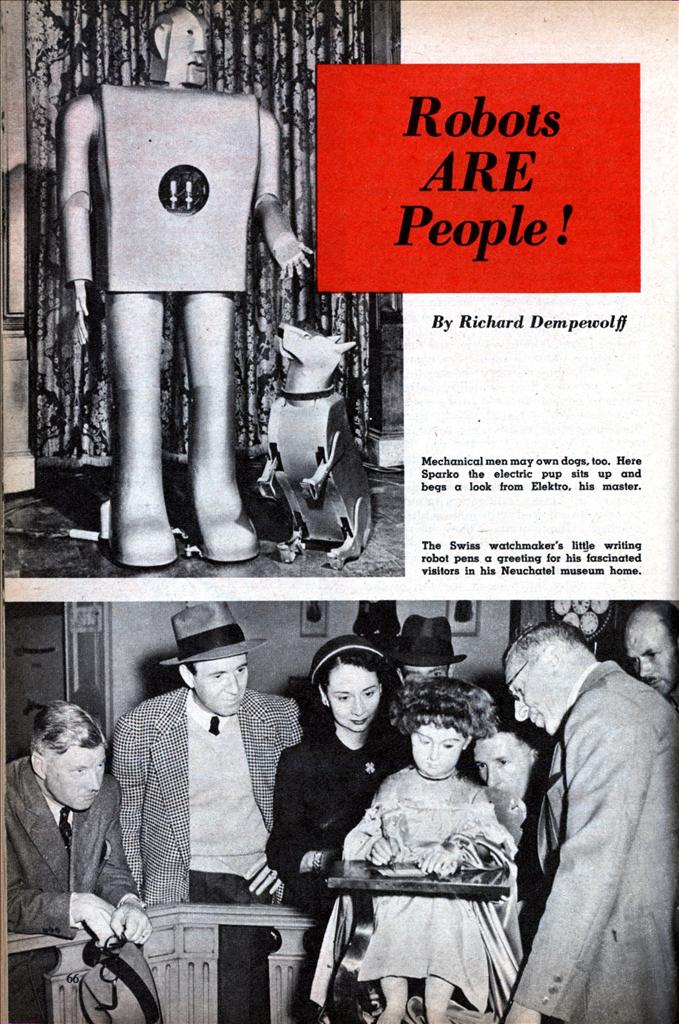 Modern scientists can make automatons that walk, talk, see—even think like a man. But only an 18th-century artisan created ‘human9 puppets.

A fantastic family lives in Neuchatel, a watch-making town hidden deep in the Swiss Alps. It’s a small family—only two boys and a girl; but it has a long history. For each one of the three was born nearly 200 years ago!

Despite two centuries of living, they show no signs of age and still look fresh and elegant in their fancy 18th-century costumes. One brother is an artist, the other a writer and the young lady a musician. These wonder children may keep all their endearing young charms and continue to use their creative talents for a thousand years. Neither youth nor health ever fails this remarkable family, the uncanniest members of that queer race man dreamed up—the robot people.

The Neuchatel robots are no jerky, mechanical dummies. One of the robot boys actually breathes. His sister puts a very real, heart-melting pathos into the music she plays on a genuine old harmonium.

They are so amazingly human, not only in looks and individual personality but also in their apparent exercise of free will and reason, that they make flesh-and-blood observers gasp in awe. And, like Dr. Frankenstein’s monster in Mary Wollstonecraft’s famous story, these robot children nearly caused their father’s death.

Turn back to a dramatic day some 20 years before the French Revolution. Pierre Jacquet-Droz, Neuchatel theologian and watchmaker, was jolting along in a fashionable coach on the high road winding through the Jura Mountains toward Paris. In a rickety, big-wheeled wagon closely following the coach were three mysterious black boxes, each measuring about six by five feet. Near a wayside inn a group of curious peasants crowded around the strange wagon and inquired about the black boxes.

“The bodies of a young woman and two boys that I myself have created,” called out Monsieur Jacquet-Droz with a quick flourish of his hands. “Each can perform wonders when I bring them to life—which J do at will!”

If he hadn’t added that he was taking his black-box magic to the Royal Court of Louis XVI by special command, the superstitious country folk would have hacked him to pieces with their scythes. Indeed, they threatened to do it, anyway—but M. Jacquet-Droz threw dust in their eyes with his hasty departure.

Before he finally reached Paris with his three black boxes, twice he had to rattle away from inns in the dead of night when friendly innkeepers warned him that bands of peasants were preparing to burn him at the stake.

In Paris, Jacquet-Droz and a secrecy-sworn French assistant unpacked the black boxes at midnight behind locked doors. With great care the watchmaker lifted the two “dead” boys from their coffin boxes, then raised the body of the wistful girl with the exquisite little nose and the supple, tapering fingers.

The awe-struck assistant faltered in his help as the robot creator posed his boys before desks and his girl before a spinet. Then he brushed the children’s human hair and touched up the rouge on their life-like cheeks and lips. After adjusting the drape of their costumes, he gently flicked off the dust from their journey. With a spit-moistened finger he redefined the children’s eyebrows and reformed the curls at the nape of the young lady’s neck.

“Now they are ready to come to life at my bidding!” he muttered as he covered each with a throw of purple damask. When he turned, the assistant had fled. The robot creator smiled.

For all his visions, the Swiss was a shrewd businessman. He had deliberately frightened his assistant. While the master technician ate a sound supper, his terrified former helper was spreading the word through the streets of Paris about the “metaphysicist” who could create living people. Jacquet-Droz had known he, too would. He figured that the publicity would catch up with him by the end of the week. It did.

All the notables in Paris flocked to the opening of his exhibition. Hearsay had turned to genuine belief. Gossip grew hot about what Jacquet-Droz had brought from Switzerland in those three strange black boxes.

“Be careful,” a duke of France cautioned his mistress, “lest one of these puppets suddenly forsake his pleasant manners and descend from his stool to attack us.”

The chance that such a thing might happen added the lure of unknown danger to the mystery about these wonderful puppets that came to life. Some speculated on whether a dwarf was hidden inside. Others whispered that Jacquet-Droz had driven a bargain with the devil.

Meanwhile, Jacquet-Droz happily counted his gate and kept an eye peeled to make sure no crank tried to assassinate one of his marvels.

The girl musician was most startling. She actually played the harmonium and her recital lasted a full hour. As a player, she showed all the skill of Haydn, the noted Austrian composer. Her eyes moved and her lips and entire head quivered with emotion. Noblemen commented on her probable virtue while showman Jacquet-Droz, artfully pretending to adjust a fold in her dress, set in motion other parts of her clockwork-driven drum. Pins in this drum made her fingers and arms move deftly over the keyboard of the spinet and play the new tunes that Jacquet-Droz himself had written.

The writer neatly penned numerous letters and messages, then dashed off a flattering toast to King Louis XVI. The artist—apparently at will, sketched complex line drawings of Cupid in a chariot, whipping up his butterfly steed; the laurel-crowned head of Louis XIV; a hound, with its name “Mon Toutou” inscribed under the belly; and. of course, Louis XVI and his consort.

Now and then the artist raised his pencil, bent his head forward with a studied expression and blew gently across the drawing so that the pencil leavings would not smudge as his hand proceeded with the sketch.

This was the master touch, for the caress of the robot artist’s breath against the cheeks of the ladies present made several of them swoon. When they revived, they claimed that this wonderful breath had been “perfumed like a meadow of Normandy poppies.”

Newspapers of the day marveled at these “living” puppets. In every sense they were the rage of Paris. Even governesses of noble brats held up the three robot children as a shining example of good conduct for the younger generation.

The Swiss watchmaker’s miracle children were not the first man-made people. Manlike monsters stalk through all folklore. Since earliest antiquity men have dreamed of strange beings created in their own image. Lots of human energy has gone into speculation on the chances of producing an artificial man that might really draw the mysterious breath of true life.

Back in 2634 B.C. the Chinese Emperor Houang-ti ordered his craftsmen to make him a man who could always point south. They turned out a clever magnetized figure—probably the first robot in history. He was set up on the rear end of a battle cart to help the Emperor pursue his ancient enemy Tschi-yeou in southern China.

Egyptians, Babylonians, Phoenicians, Cretans and Greeks also dabbled in robot making. They used hydraulic and pneumatic devices to move their hand-carved little men and thus astound worshippers in their temples.

In the Middle Ages, Albert Magnus reportedly spent 30 years in building a mechanical man that answered the door and saluted the visitor.

Camus made a fancy toy carriage for Louis XIV of France. The tiny coachman cracked a whip and the little horses’ legs moved naturally. When the carriage arrived opposite the King’s seat, a page hopped down and opened the door for milady, who then stepped out and presented a petition to the King.

Rene Descartes, the 17th-Century French philosopher, thought “bodies are all mechanisms” and created an automatic female to prove his theory. When he tried to ship his mechanical woman across the English Channel, a tempest arose. The young lady began “to jump about in an unseemly fashion” within her sealed box. The ship’s captain had the box opened. When he saw the strange woman inside the box, he promptly tossed her overboard.

“Back to the devil, where you belong,” he cried.

Modern robots usually get better treatment than did Descartes’ restless lady. The term robot derives from the Czech word robit, meaning “work,” and came into wide use in 1923 when Karl Capek wrote a play R. U. R. (Rossum’s Universal Robots), in which mechanical beings did all the work for man.

In real life, scientists are yet to achieve this happy, workless state—but they have created many ingenious robots that are taking over some of our monotonous tasks— from answering the phone to piloting planes or working out complex mathematical problems.

Bell Laboratories’ weird electronic brain called Vodor can put words together mechanically and “talk.” In Washington the U. S. Coast and Geodetic Survey has a complicated machine known as The Great Brass Brain. When questioned, this robot can predict tides accurately for every port in the world—years in advance.

Not only can some of today’s robots think out difficult mathematical problems and talk, but others have sensitive fingers and ears, can test chemicals by “sense of taste” or see through photo-electric eyes. But even the best of modern robots look more like clever gadgets than like people.

Despite all the new tricks, our latest mechanical men lack the personality that made critics of Jacquet-Droz insist that he had sold himself to the devil for the privilege of creating people more lasting and clever than God’s. Nearly 200 years have passed since his mechanical boy dotted his first “i,” the artist drew his first cupid and the girl tapped out her first minuet. Yet the trio remain as startling as the day their creator popped them out of their black boxes in Paris.

Today, in the historical museum at Neuchatel, the artist’s eerie breath still draws a gasp from his audience. The young lady of the little robot family still minuets with a skilled human touch no modern, mechanical player can copy.

Only the writer has lost some of his human quality. Over and over again he must scribble out “Welcome to Neuchatel” for the gaping visitors. Some day, as he hears the same gasp, sees the same gesture of surprise, gets the same request for a souvenir of his writing from the staring line of spectators, he may slip a cog and jot down on his pad, “PEOPLE are robots!”

Take it from Pierre the Penman. He’s had almost 200 years of very personal experience with robots—he should know.