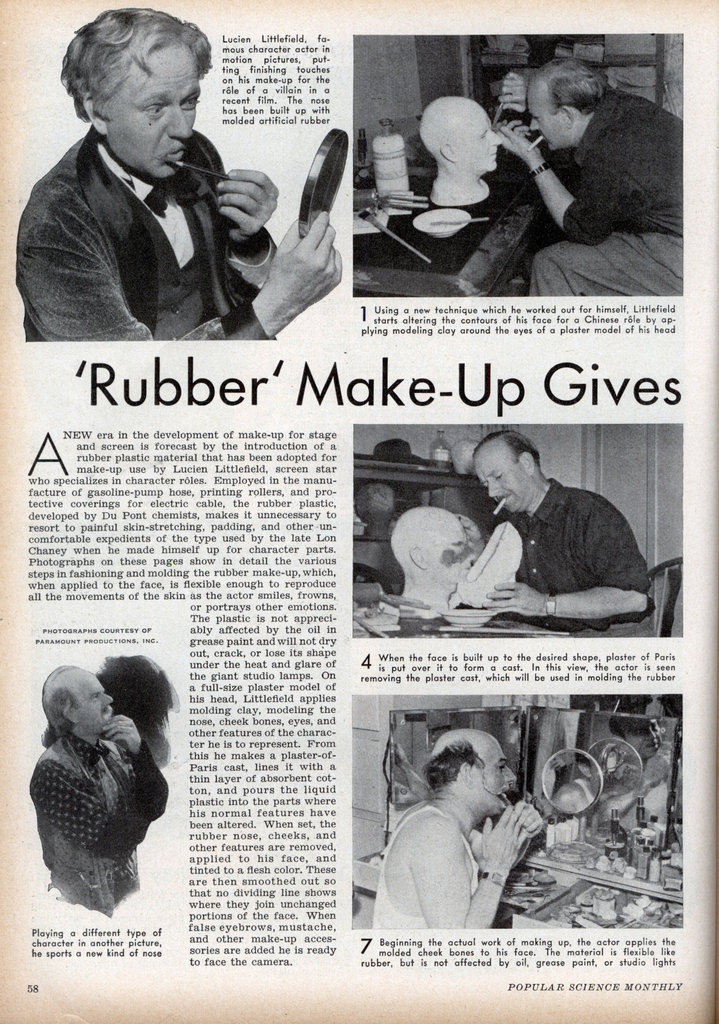 A NEW era in the development of make-up for stage and screen is forecast by the introduction of a rubber plastic material that has been adopted for make-up use by Lucien Littlefield, screen star who specializes in character roles. Employed in the manufacture of gasoline-pump hose, printing rollers, and protective coverings for electric cable, the rubber plastic, developed by Du Pont chemists, makes it unnecessary to resort to painful skin-stretching, padding, and other uncomfortable expedients of the type used by the late Lon Chaney when he made himself up for character parts. Photographs on these pages show in detail the various steps in fashioning and molding the rubber make-up, which, when applied to the face, is flexible enough to reproduce all the movements of the skin as the actor smiles, frowns, or portrays other emotions. The plastic is not appreciably affected by the oil in grease paint and will not dry out, crack, or lose its shape under the heat and glare of the giant studio lamps. On a full-size plaster model of his head, Littlefield applies molding clay, modeling the nose, cheek bones, eyes, and other features of the character he is to represent. From this he makes a plaster-of-Paris cast, lines it with a thin layer of absorbent cotton, and pours the liquid plastic into the parts where his normal features have been altered. When set, the rubber nose, cheeks, and other features are removed, applied to his face, and tinted to a flesh color. These are then smoothed out so that no dividing line shows where they join unchanged portions of the face. When false eyebrows, mustache, and other make-up accessories are added he is ready to face the camera.

1. Using a new technique which he worked out for himself, Littlefield starts altering the contours of his face for a Chinese role by applying modeling clay around the eyes of a plaster model of his head

2. In the same manner, clay is put on the nose of the model and is shaped by hand into the contours that the experienced actor considers appropriate for the character he will portray in the new movie

3. To reproduce the high cheek bones of an Oriental, this part of the face is raised with clay. Here Littlefield is seen using a sculptor’s tool to give the eyes the necessary slanting appearance

4. When the face is built up to the desired shape, plaster of Paris is put over it to form a cast. In this view, the actor is seen removing the plaster cast, which will be used in molding the rubber

5. After a thin layer of absorbent cotton has been pressed into the mold, artificial latex is poured into the parts where the shape of the face has been changed. The liquid is left to harden in the sun

6. Littlefield then removes the molded parts from the cast. The cotton placed in the mold allows them to be taken out without trouble

7. Beginning the actual work of making up, the actor applies the molded cheek bones to his face. The material is flexible like rubber, but is not affected by oil, grease paint, or studio lights

8. Now the eyebrows go on. The artificial features look exactly like human skin when they are given a flesh tint. At the right, Littlefield is seen completely made up for his part, ready to step before the camera in the character of a Chinese