There is an inverse relationship between the likeliness that a design will be produced and the triviality of the items included in the diagram. In this case someone felt the need to point out the landing lights, but neglected to include fuel tanks. 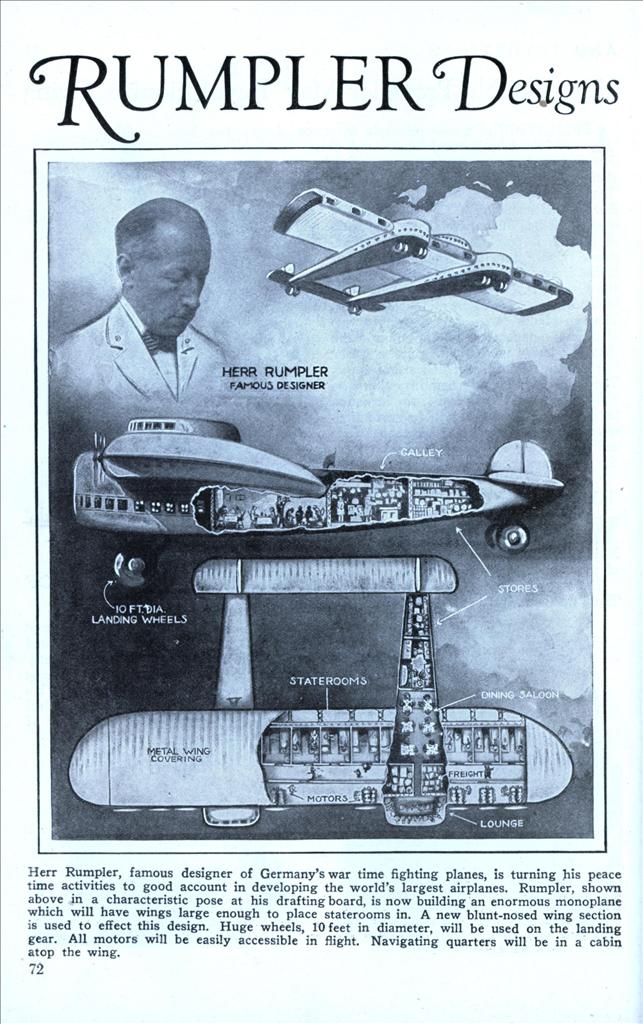 Herr Rumpler, famous designer of Germany’s war time fighting planes, is turning his peace time activities to good account in developing the world’s largest airplanes. Rumpler, shown above in a characteristic pose at his drafting board, is now building an enormous monoplane which will have wings large enough to place staterooms in. A new blunt-nosed wing section is used to effect this design. Huge wheels, 10 feet in diameter, will be used on the landing gear. All motors will be easily accessible in flight. Navigating quarters will be in a cabin atop the wing.

The new Rumpler monoplane, now nearing completion in Germany, will have a span of 300 feet and a chord of 50 feet. It will be so large that space between the sides of each wing spar will be used for hallways, staterooms and motor compartments. A specially designed, power operated air field railway track will be constructed for housing the new giant. The cross section drawing shows the disposition of the arrangement. The plane will cruise at 82 m.p.h. A gigantic hangar is shown in the photo below with the big ship on the track. Note room for two of these monsters.