Safe Stunts with Fire FOR THE HOME CHEMIST (Nov, 1934) 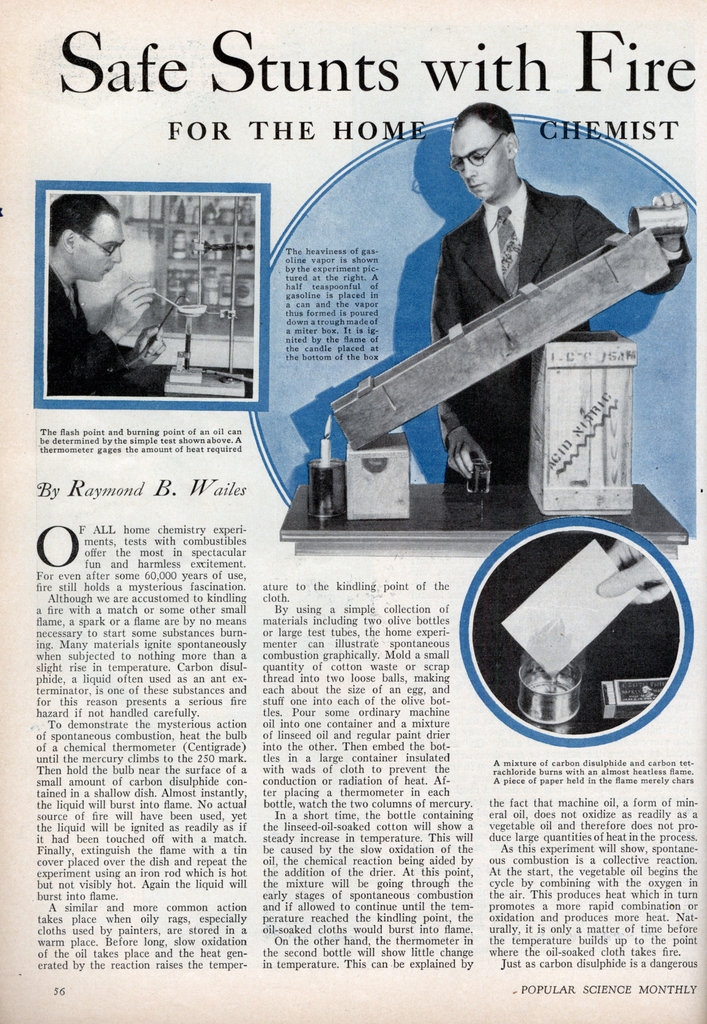 Safe Stunts with Fire FOR THE HOME CHEMIST

OF ALL home chemistry experiments, tests with combustibles offer the most in spectacular fun and harmless excitement. For even after some 60,000 years of use, fire still holds a mysterious fascination.

Although we are accustomed to kindling a fire with a match or some other small flame, a spark or a flame are by no means necessary to start some substances burning. Many materials ignite spontaneously when subjected to nothing more than a slight rise in temperature. Carbon disul-phide, a liquid often used as an ant exterminator, is one of these substances and for this reason presents a serious fire hazard if not handled carefully.

To demonstrate the mysterious action of spontaneous combustion, heat the bulb of a chemical thermometer (Centigrade) until the mercury climbs to the 250 mark. Then hold the bulb near the surface of a small amount of carbon disulphide contained in a shallow dish. Almost instantly, the liquid will burst into flame. No actual source of fire will have been used, yet the liquid will be ignited as readily as if it had been touched off with a match. Finally, extinguish the flame with a tin cover placed over the dish and repeat the experiment using an iron rod which is hot but not visibly hot. Again the liquid will burst into flame.

A similar and more common action takes place when oily rags, especially cloths used by painters, are stored in a warm place. Before long, slow oxidation of the oil takes place and the heat generated by the reaction raises the temperature to the kindling point of the cloth.

By using a simple collection of materials including two olive bottles or large test tubes, the home experimenter can illustrate spontaneous combustion graphically. Mold a small quantity of cotton waste or scrap thread into two loose balls, making each about the size of an egg, and stuff one into each of the olive bottles. Pour some ordinary machine oil into one container and a mixture of linseed oil and regular paint drier into the other. Then embed the bottles in a large container insulated with wads of cloth to prevent the conduction or radiation of heat. After placing a thermometer in each bottle, watch the two columns of mercury.

In a short time, the bottle containing the linseed-oil-soaked cotton will show a steady increase in temperature. This will be caused by the slow oxidation of the oil, the chemical reaction being aided by the addition of the drier. At this point, the mixture will be going through the early stages of spontaneous combustion and if allowed to continue until the temperature reached the kindling point, the oil-soaked cloths would burst into flame.

On the other hand, the thermometer in the second bottle will show little change in temperature. This can be explained by the fact that machine oil, a form of mineral oil, does not oxidize as readily as a vegetable oil and therefore does not produce large quantities of heat in the process.

As this experiment will show, spontaneous combustion is a collective reaction. At the start, the vegetable oil begins the cycle by combining with the oxygen in the air. This produces heat which in turn promotes a more rapid combination or oxidation and produces more heat. Naturally, it is only a matter of time before the temperature builds up to the point where the oil-soaked cloth takes fire.

Just as carbon disulphide is a dangerous liquid that bursts into flame with the slightest increase of temperature, another liquid carbon compound, carbon tetrachloride, is equally active as a fire extinguisher. When thrown or squirted on a fire, it cools the flame and blankets the base of the fire with a heavy cloud of gas that soon cuts off the necessary supply of air and oxygen.

Strange as it may seem, however, even carbon tetrachloride can be made to burn under the right conditions. When placed in contact with powdered zinc and sand, for instance, and ignited with a magnesium fuse, the combination will burn to give off large quantities of heat and larger quantities of smoke. It is this mixture which forms the basis of the smoke pots used by armies in war time and because of the large quantities of smoke given off, the experiment demonstrating it should be performed out-of-doors.

First select a small tin can and fill it three quarters full with a mixture of equal amounts of extremely fine sand, road dust, or fuller’s earth, and finely powdered zinc. Carbon tetrachloride then should be poured into the can until the mixture is thoroughly soaked. Any excess not absorbed by the powder can be poured off. Finally, make a small conical depression in the top of the damp mixture, fill it with powdered magnesium, and top it off with a strip of magnesium to act as a fuse.

Once the magnesium is ignited, it will prime or ignite the mixture and start the chemical action which produces the billows of dark gray smoke. What actually happens is this: The zinc in burning combines with the carbon tetrachloride to form zinc chloride and particles of black carbon. The zinc chloride then reacts with the moisture in the air to form white zinc oxide which, together with the particles of black carbon, make up the dark gray smoke. Incidentally, miniature smoke pots of this type are a valuable property for amateur theatricals.

By combining the two carbon liquids used in the experiments so far, the home chemist can produce an almost heatless flame. Mix three parts by volume of carbon disulphide with eight parts of carbon tetrachloride and light the resulting solution. The temperature of the flame will be so low that a piece of newspaper, generally considered as being particularly inflammable, held in it will not burn. It may char, depending on conditions, but it will not burst into flame.

In experiments to determine the combustibility of inflammable materials, fire department officials have found that heavy vapors often flow along surfaces for many feet to be ignited by some distant flame. A simple home-laboratory experiment that shows the heaviness and flowing qualities of gasoline vapor can be performed by pouring a half teaspoonful of liquid gasoline into a beaker. In a short time, the beaker will be filled with a heavy vapor of gasoline. If it is then carefully tipped, the heavy vapors can be poured into a second beaker. Finally, being careful to keep away from the first beaker containing the liquid gasoline, invert the second beaker containing the vapor over a lighted candle or match. The gasoline vapor will literally pour out of the beaker and take fire with a lazy, floating flame.

From your experiments with spontaneous combustion, it must not be assumed that mineral oils do not burn. Nothing could be further from the truth. It is the mineral type of oil that is used as a fuel for heating. In fact, two specifications on which mineral oils are graded are their flash point, the temperature at which their vapors when mixed with air will explode, and their fire point, the temperature at which they will take fire and burn.

As a practical experiment in combustibles, the home chemist should obtain several lubricating oils and test them for flash and fire points. The equipment required is particularly simple and the results obtained are comparatively accurate. First place a shallow evaporating dish or the friction top of a tin baking soda can on the support of your laboratory stand as shown in the photographs, arranging it so that it is held over the tip of your regular gas burner. Then rig a thermometer vertically and allow its bulb to dip into a small sample of the oil placed in the dish. Also arrange a small pilot light by fitting the spout of a small oil can to a piece of rubber tubing leading to your gas supply. When you have lighted both the gas burner and the pilot light you are ready to proceed. The burner should heat the oil slowly and the pilot flame should be no larger than the head of a large match.

Stir the oil slowly and whisk the tiny pilot flame across the surface of the oil at ten-second intervals. As the temperature increases, watch the oil carefully. Sooner or later, whisking the pilot across the oil will cause the oil vapor to ignite with a momentary flash. The reading of the thermometer then will be the flash point of the oil.

Continue the heating and resume the whisking process with the pilot light. The moment that the oil catches fire and continues to burn, read the thermometer again. This second reading will be the firepoint.

The differentiation between the two points is easily recognized. At the flash point only the vapor given off by the oil takes fire and it will stop burning the instant the pilot flame is removed from the vicinity of the oil. At the fire point, on the other hand, the oil will continue to burn of its own accord until it is extinguished by smothering it with a sheet of tin.

To prove that oils differ in characteristics, the home experimenter should test various types and grades of oils for their flash and fire points. If a test is repeated, a fresh sample of the oil should, of course, be used. When accurate results are desired, these flash and fire tests should be performed in the absence of drafts. A direct draft on the test apparatus will tend to cool the surface of the oil and may raise the flash and fire points. Also, it is well to use the same size pilot flame in each of a series of comparative tests.

Just as chemicals can be used to promote combustion, they also can be used to prevent it. Both wood and cloth can be fire-proofed through the use of simple chemicals. To demonstrate this, dissolve about five teaspoonfuls of ammonium phosphate in two or three tea-spoonfuls of water. Immerse a small square of cloth in the liquid, allow it to soak for a minute or so, and then hang it up to dry. Finally, try to ignite the cloth with a match. Although it may scorch or char, it will not burst into flame as readily as cloth of the untreated variety. If ammonium phosphate is not available, ordinary alum dissolved in water can be used.

Wood can be fire-proofed in a similar way by using sodium silicate (water glass). As an experiment, paint a narrow band of the chemical around a large kitchen match stick about an eighth inch or so in back of the head. When the water glass has dried, strike the match. It will burn brightly until the flame reaches the treated wood. Trick matches that will go out as soon as they are lighted can be made in this way by the home chemist whose friends are continually borrowing a light.