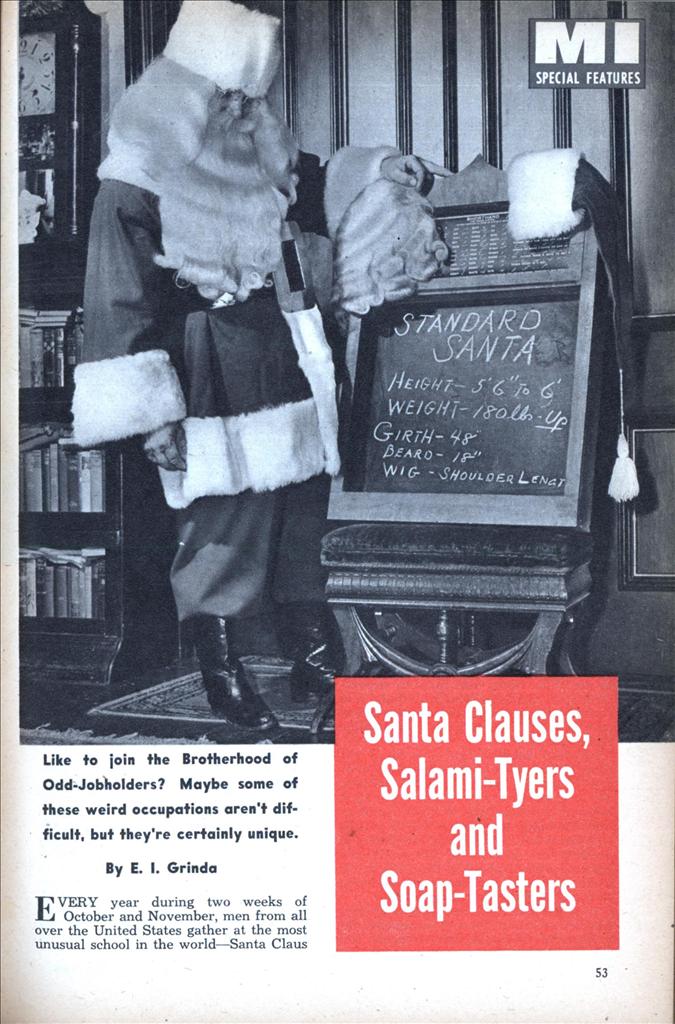 Like to join the Brotherhood of Odd-Jobholders? Maybe some of these weird occupations aren’t difficult, but they’re certainly unique.

EVERY year during two weeks of October and November, men from all aver the United States gather at the most unusual school in the world—Santa Claus College. In Albion, N. Y., they study to be genial St. Nicks, sent there by department store managers who have found that their most acute problem near the end of each year is where to get a good reliable Santa Claus.

Eighteen subjects are covered in the short but intensive course—child psychology being one of the most important. Students must learn the origin, history and meaning of Santa Claus. Without that inner understanding, there is no use in putting on a Santa suit. Then there are classes in dressing the student in the traditional costume and explaining the reason for color, trimming and design. In addition, they are taught the art of make-up.

If, at the end of the course, a man satisfies Dean Charles Howard, he qualifies for a Bachelor Of Santa Claus degree and goes out into the world, thoroughly prepared for his job.

This is a job, you say? Well, it’s only mildly unusual when you consider some others, for thousands of Americans are working at an enormous variety of weird occupations.

There’s Mr. Jones, the sexamian, for instance—he tells the sex of baby chicks. Then, there’s Jim, the dishwasher, better known in the trade as a pearl diver. And Ken, the reducer, who makes a living cutting out curves in women’s shoes. A man who is known as a bubble pricker works in a sausage plant pricking air bubbles in finished sausages. In another plant, women put labels on teabags. They are called teabag taggers. And in still another place, there’s a guy who spends all his time tying the ends of salamis.

Many existing jobs would seem fantastic to the average wage earner who works as a bank teller, stenographer or lawyer. But they certainly do exist—perhaps just a few blocks down from your office, as a matter of fact. Let’s look at some of them.

The little man stood on the pier in Hamburg, Germany, clutching the handle of his butterfly net and peering anxiously around the door. Although debarking passengers eyed him suspiciously, the longshoremen smiled knowingly. They’d seen him around before.

Who was this odd character? Well, this man is a catcher for the Hamburg Zoo. From ports in Argentina, vessels loaded with quehracho wood leave for Hamburg.. The catcher waits until the cargo is unloaded and piled onto the docks for further transport; then his job begins. In the hollow trunks of the trees many small animals and reptiles reside. When the trunks are unloaded, these creatures are jarred. If any survive this ordeal, they are promptly pounced upon by the catcher and his net. He collects his finds into small boxes and deftly hustles them off to the zoo where they will be displayed to amuse and educate the curious public of Hamburg.

One Man’s Headache, the radio soap opera, is on the air. Actors and actresses are sitting around the microphone reading their lines. A door creaks open, a woman’s voice shrieks and then a baby begins to cry. Ruth Patterson is sitting next to the sound effects man in the adjacent room, crying into a pillow. She is so effective in her job as baby crier that many women listeners call the radio studio to ask the program manager if they stick pins into a baby to make it wail. Ruth cries on cue for five programs a day. She’s been doing it for eight years.

There is nothing unusual about Bill Smith’s name but there is about his job. He is a shadow thrower. Mr. Smith operates a 7,000,000-candlepower searchlight at a New Jersey airport. His shadow throwing activities begin when a plane is due.

First, he stabs the darkness with his brilliant light. Then, wearing a heavy overcoat for protection from the heat, Bill steps in front of the light and projects his body in silhouette over the nose of the plane to shield the pilot’s eyes. Smith has been doing this job for ten years and he’s the only professional shadow thrower. “It’s light work,” he says.

Many of the beautifully groomed thoroughbred dogs and cats in the fashionable corners of New York City look snooty to ordinary mongrel human beings. Well, maybe they should be snooty—many of these well-dressed title winners have their own special foods served to them whenever the inclination hits them. Mrs. C. L. Davenport, a dog dietitian of Manhattan, offers a special catering service for them. Every customer’s dog is listed in her files by name, breed, coloration, weight, foibles and habits. She serves a regular menu, specially prepared, for each dog listed and watches each dog’s weight carefully. If he needs to trim off a bit of poundage on his left flank, she prepares a diet to do it.

The old expression about having too many thumbs can’t be employed to describe Harry. Davis of Newport, Conn. He has too many toes. A new neighbor looked into his shop window one day and, after recovering from the first shock, reported what she saw to the police. On investigation, they found Harry’s shop floor covered with realistic wooden toes. Harry Davis makes a living fashioning them for artificial wooden legs.

In Hamilton, Ohio, behind voluptuous leather-covered books on subjects of animal lore, a young woman sits with paint and brush applying color to small round glass disks. She makes phony eyes for extinct animals of all kinds. The history of every animal, bird and fish must be carefully studied, drawings must be found for examination, coloration and environment of every animal or bird must be considered before any attempt is made to make the eyes.

A walk through the park is not a mere pleasure jaunt for Jack Harvey, deep in the heart of Texas. It’s a profession—Jack walks dogs. He’s a professional dog walker, catering to guests who have brought along their pet pooches for a stay at hotels and resorts. Before Jack signs a contract to walk a dog for the duration of the owner’s stay, he acquaints himself personally with the dog for a period of two to six hours. If the hound has not been properly trained to walk without pulling on the leash, Jack will not consider the case. “Everyone wants to look good on the job but when a dog pulls you, well, it doesn’t put you in an advantageous light,” Jack says. “Besides the appearance, the energy it takes to pull a dog back every few minutes is an unnecessary expense to the muscles when you consider a walker walks at least 30 dogs a day.”

Up in the hills of Nilgiri in India there is a secluded sanitarium. Inside, a tall, dark man cures the ailments of thousands of patients brought in by farmers from neighboring towns and villages. This man, dressed in white and wearing rubber gloves, is reverently addressed as doctor and has as his patients tiny ailing larvae. He’s the Doctor Kildare of the silkworm world.

Inside a big circus tent, a man is sprinkling white flour over the ground. After he finishes the job, two boys are called in to lead an elephant over the flour-strewn surface. The elephant’s footprints are then measured for size by the animal tailor. He wheels in his red and blue cart containing all the essentials for his trade. From the measurements imprinted in the flour, the tailor will make a pair of shoes for the elephant to wear in his next performance. When that is done, the monkeys must have their coats re-frilled, the giraffe needs a new sweater for his neck, and Betsy, the old gray mare, is waiting for a replacement of her threadbare hat.

Some people can lie down on the job without worrying about the boss. In a department store in Clinton, Iowa, for instance, a very charming and attractive young woman lies on a mattress on a large bed demonstrating its restful qualities. By her facial expressions the customers gleam that the mattress has all the comforts claimed for it by the manufacturer. She says her job is a very soft one.

Grandmother used to sit before the fire in the winter and spin on the old spinning wheel. Well, Hollywood has its spinners, too. They toil all day by their machines turning out cobwebs for haunted houses and other antiquities.

Most people would feel highly insulted if they were referred to as dumbbells. Fay Parker, however, doesn’t seem to mind it too much. Several months ago her husband, owner and operator of a small construction company, asked Fay for a small favor. He was short a counterweight for a lifting job that needed to be done. Would Fay—all 220 pounds of her—oblige by acting as a dumbbell? Fay consented and she has helped her husband out many times since. In fact, Fay has adopted it as her own special part-time profession.

There’s a skeleton in many a family’s closet but there may be more than one in some—in Will Harpers’, for instance. In his shop in Central Falls, R. I., you encounter human skeletons on every table, chair and chandelier. On Mondays through Fridays, Will sits behind his long work table, fits the bones of human skulls together and attaches the completed skulls to human skeletons. Will assembles the skeletons for medical schools and private collections.

Did you ever get the feeling that someone was watching you from some concealed nook? Well, you never can tell. In the Los Angeles Public Library, a man constantly stands behind a grille with a powerful pair of binoculars. He’s known as a library sleuth. And his job is to spy on would-be thieves and defacers of books in the library.

In the season when the moon hangs low and deep night shrouds the paths and byways, the time is at hand when spooners sigh. But the spooner is not only a Romeo—there are many men who are listed in the professions as spooners. While the spooner of tradition pitches woo on the conventional park bench, the professional spooner scoops out holes for the insertion of dynamite charges on a construction job.

Just about five o’clock one afternoon in Los Angeles, the clouds emptied a torrential downpour upon the city. In a small soap factory it was quitting time and Benny was sad to see the rains come for he knew it would instigate the same old joke from the boys. “Don’t open your mouth, Ben,” they would say, “you know what will happen. Someone will think you’re chewing bubblegum.” Ben is a soap-taster in the factory. When each new boiled batch is ready to be judged, he tastes a sample of it to make Sure it is done and is made to the right specifications. And as a soap-taster he is subjected to many a round of supposedly hilarious comments about his job.

But, Santa Claus, salami-tyer or soap-taster—most of these people have one thing in common. They’re not ashamed of their work. In fact, circumstances have banded them together into a sort of proud fraternity of odd-jobholders. For, despite all the friendly gags and barbed remarks, the fact remains that these jobs are unique.

And such good topics of conversation.