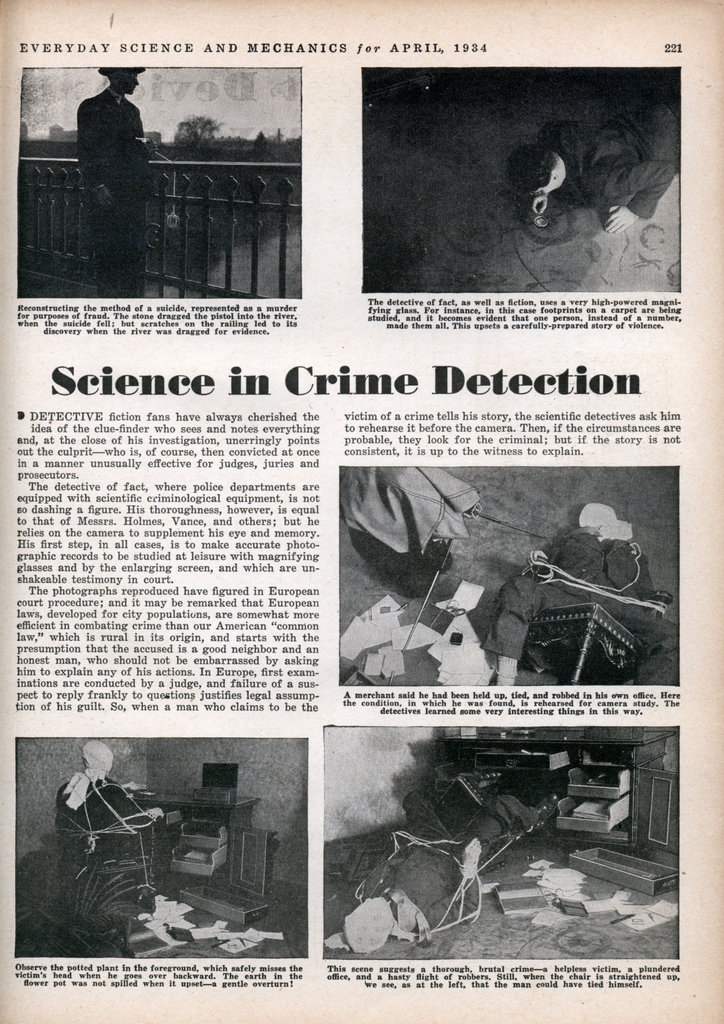 DETECTIVE fiction fans have always cherished the idea of the clue-finder who sees and notes everything and, at the close of his investigation, unerringly points out the culprit—who is, of course, then convicted at once in a manner unusually effective for judges, juries and prosecutors.

The detective of fact, where police departments are equipped with scientific criminological equipment, is not 60 dashing a figure. His thoroughness, however, is equal to that of Messrs. Holmes, Vance, and others; but he relies on the camera to supplement his eye and memory. His first step, in all cases, is to make accurate photographic records to be studied at leisure with magnifying glasses and by the enlarging screen, and which are unshakeable testimony in court.

The photographs reproduced have figured in European court procedure; and it may be remarked that European laws, developed for city populations, are somewhat more efficient in combating crime than our American “common law,” which is rural in its origin, and starts with the presumption that the accused is a good neighbor and an honest man, who should not be embarrassed by asking him to explain any of his actions. In Europe, first examinations are conducted by a judge, and failure of a suspect to reply frankly to questions justifies legal assumption of his guilt. So, when a man who claims to be the victim of a crime tells his story, the scientific detectives ask him to rehearse it before the camera. Then, if the circumstances are probable, they look for the criminal; but if the story is not consistent, it is up to the witness to explain.