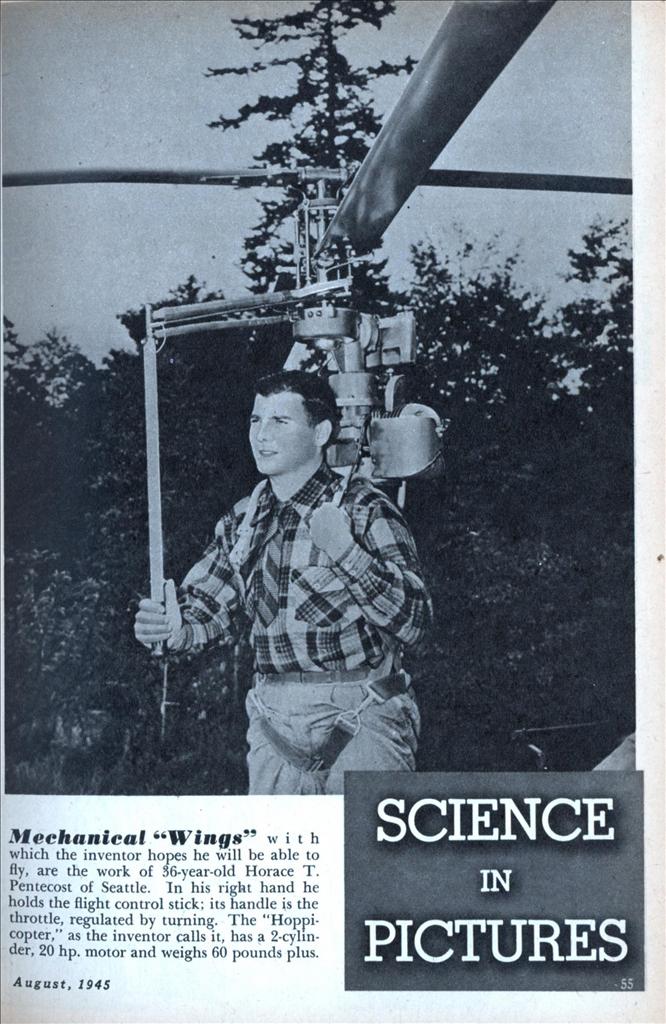 “General Pershing” is the name of America’s latest, biggest, and most lethal tank. Its high velocity 90 mm. gun can knock out enemy tanks at ranges of two miles or more.

Dam Model -Scaled at 1 : 60 feet, this model of the proposed Bridge Canyon Dam is being used by the Bureau of Reclamation’s hydraulic laboratory to eliminate “bugs” in the postwar project.

Rotary Snow Plow that can be converted into a lawnmower was built for $12 by A. A. Schwartz from an electric motor, a garbage pail, frying pan, stovepipe, two pulleys, and scrap metal.

“Comet”, Great Britain’s fastest and most heavily armored cruiser tank, is a descendant of the Cromwell. Powered by a Rolls-Royce Meteor engine, it carries a very hard-hitting 77 mm. gun equipped with a new gun-laying device that makes it the most accurate British gun yet. News of the “Comet” was withheld because none had fallen into enemy hands up to VE day.

New Engine is this large steam-turbine-electric locomotive to be used by the Chesapeake & Ohio. Engine is capable of speeds over 100 mph, the coal supply is carried in the head of the locomotive instead of the tender, the boiler is located in the center section behind the engineer’s cab, and the electric motors are in the rear.

Record Dive to 240 lbs. per sq. in., this was the pressure to which Jack Browne, 28-year-old president of a Milwaukee diving supply company, was subjected when he set a new deep sea diving record in a compression chamber in Milwaukee. He wears a helium-oxygen mask (to avoid ‘bends”) and a 50-pound diving suit.

Light Plane, latest model, is the British Miles Messenger, originally designed for specialized war duties, but well suited to postwar private flying. It’s shown here after having been test-flown into a net, throwing full shock of landing on the wings, without damage. A 3- or 4-seater, the plane can take off or land in 60 yards, is easy to fly. 140 hp. engine gives it 120 mph. speed.

“Droop Snoot” was the name given to tricky bombing missions flown by Lightnings carrying two tons of bombs apiece. Elongated nose of this lead plane contains bombardier-navigator compartment equipped with high altitude precision bombing apparatus. Leading formations of bomb-filled fighters, the “droop snoot” aimed and navigated for the group. This camouflaged bombing attack fooled the Nazis for over a year.

“The Runt” squats on the ground at the Douglas Santa Monica service training school and instructs mechanics in the fundamentals of the C-54 “Sky-master” cargo plane without leaving the ground. It consists of the outboard wing panel of the A-20 Havoc mounted on a full-scale forward section of the C-54. The instrument panel records all operations of the 4-1/2 hp. motors.

Sawdust Tires, made of sawdust—impregnated rubber, are really skid-proof, the inventors claim. The two outside tires in photo (left) are the new kind; the center tire is plain rubber.

“Selector” electric alarm clock will turn on the radio, toaster, or lights automatically, time roasting operations and refrigerator defrosting, time any electrical device that plugs into wall socket. Made by Telechron, it will sell for about $10.

Braking of mammoth aircraft tires is tested at Wright Field’s ATSC laboratory. Inertia braking machine spins 350,000 lbs. of steel plates at 3 miles a minute, then slams 3/4 of a ton of 110-inch tire against it. Dials register stress and strain.

2-Minute Chair that can be assembled by an amateur is demonstrated by designer Jules Gottschalk. It’s shaped to decrease weight of material while still giving adequate body support. Two legs instead of usual four lower production costs.

Cooked. Frozen meals that are served on disposable plates will be available to civilians after the War. Foods are partially cooked at the plant, placed on lacquered cardboard plates (right), and quick-frozen at 20° below zero (left above). Housewife cooks meal for 15 minutes in small, thermostatically-controlled oven (right above). Plates can be thrown away after food is eaten.

Insulation made in liquid form, developed for use by the armed forces, is now available to civilians. Called “PiB,” the new product is a penetrant, is absorbed by material treated instead of going on as a coating. In demonstration (left), car with water-soaked ignition started immediately after being treated with “PiB.”

Giant Tank with wheels 102″ high was found in this uncompleted state by American soldiers at a factory near the German town of Hillersleben. Only the chassis is shown, but the immense size of the vehicle is apparent.

Another Nazi mammoth tank was captured half-finished by American troops. The factory is scarcely large enough to hold it. The tank has an opening for a super-size gun turret, but the size of the gun, or guns, to be mounted, is not known. Tracks are 39 inches wide, armor 5 inches thick.

Model of an Essex-class, 27,000-ton, $70,000,000 carrier was constructed in wood at the Brooklyn Navy Yard and erected in the Sunken Plaza in Radio City to aid the Seventh War Loan Drive. Model was named “Fighting Lady.”

3300 Years Old were the seeds from which came the “parents” of these peas growing at the AAF Tactical Center at Orlando, Fla. Three peas found in the tomb of famed King Tutankhamen were planted, produced peas remarkable for growth, resistance to heat, and immunity from plant pests.

Movie Clouds are pain ted on glass by Carl Crouse, who works with his back turned because of the powerful light behind the glass (which is special heat-treated quartz). Arc lamp projects his work in terms of light and shadow on huge canvas backdrops to create illusion of outdoors within studio sound stages.