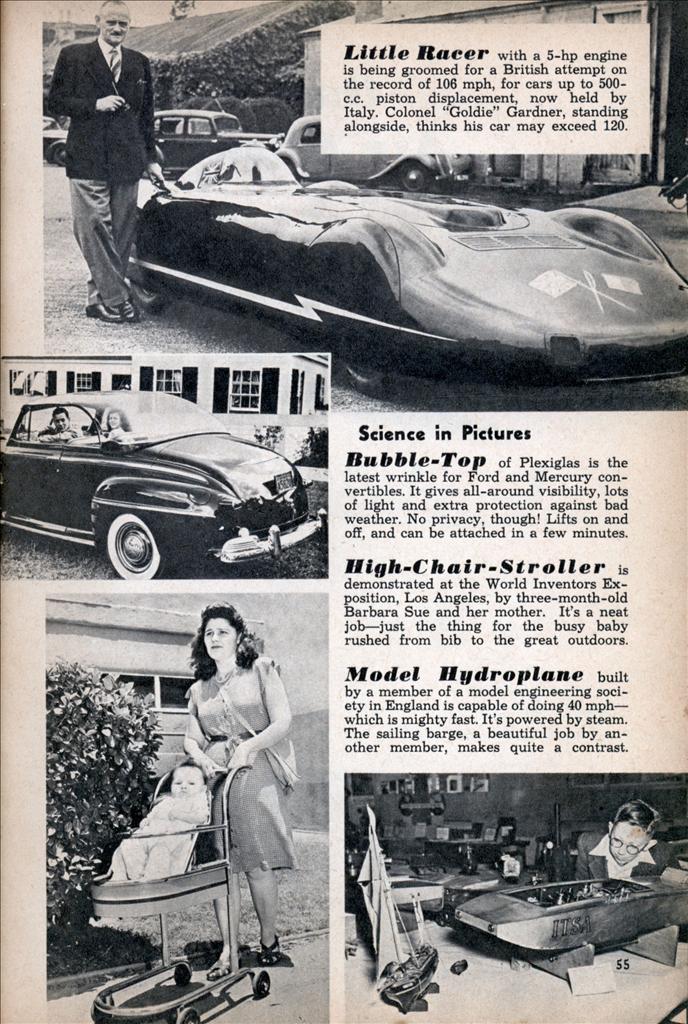 Little Racer with a 5-hp engine is being groomed for a British attempt on the record of 106 mph, for cars up to 500-c.c. piston displacement, now held by Italy. Colonel “Goldie” Gardner, standing alongside, thinks his car may exceed 120.

Bubble-Top of Plexiglas is the latest wrinkle for Ford and Mercury convertibles. It gives all-around visibility, lots of light and extra protection against bad weather. No privacy, though! Lifts on and off, and can be attached in a few minutes.

High-Chair-Stroller is demonstrated at the World Inventors Exposition, Los Angeles, by three-month-old Barbara Sue and her mother. It’s a neat job—just the thing for the busy baby rushed from bib to the great outdoors.

Model Hydroplane built by a member of a model engineering society in England is capable of doing 40 mph— which is mighty fast. It’s powered by steam. The sailing barge, a beautiful job by another member, makes quite a contrast.

Busless Driver is having a fine time on this animated Westinghouse display, working the Electrocam controls exactly as he would at the wheel of an actual trolley coach on the road.

Atomic Power Plant schematic model by GE. Left, the pile where matter is transformed into energy. Dr. K. H. Kingdom holds a rod of “fuel”; the striped rods are controls.