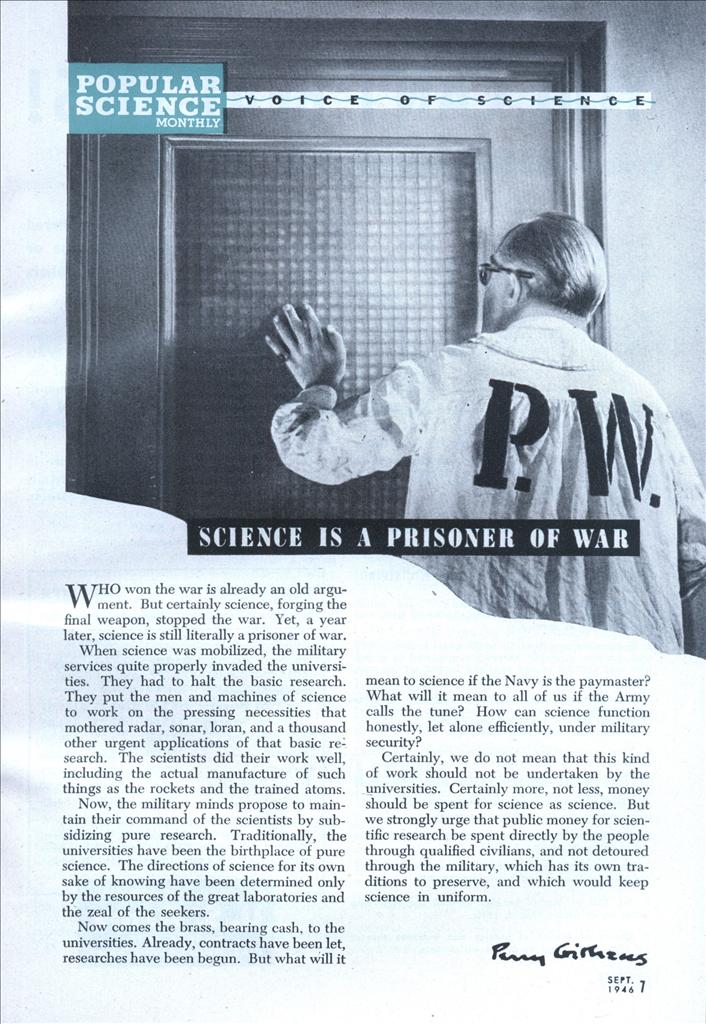 SCIENCE IS A PRISONER OF WAR

WHO won the war is already an old argument. But certainly science, forging the final weapon, stopped the war. Yet, a year later, science is still literally a prisoner of war.

When science was mobilized, the military services quite properly invaded the universities. They had to halt the basic research. They put the men and machines of science to work on the pressing necessities that mothered radar, sonar, loran, and a thousand other urgent applications of that basic research. The scientists did their work well, including the actual manufacture of such things as the rockets and the trained atoms.

Now, the military minds propose to maintain their command of the scientists by subsidizing pure research. Traditionally, the universities have been the birthplace of pure science. The directions of science for its own sake of knowing have been determined only by the resources of the great laboratories and the zeal of the seekers.

Now comes the brass, bearing cash, to the universities. Already, contracts have been let, researches have been begun. But what will it mean to science if the Navy is the paymaster? What will it mean to all of us if the Army calls the tune? How can science function honestly, let alone efficiently, under military security?

Certainly, we do not mean that this kind of work should not be undertaken by the universities. Certainly more, not less, money should be spent for science as science. But we strongly urge that public money for scientific research be spent directly by the people through qualified civilians, and not detoured through the military, which has its own traditions to preserve, and which would keep science in uniform.