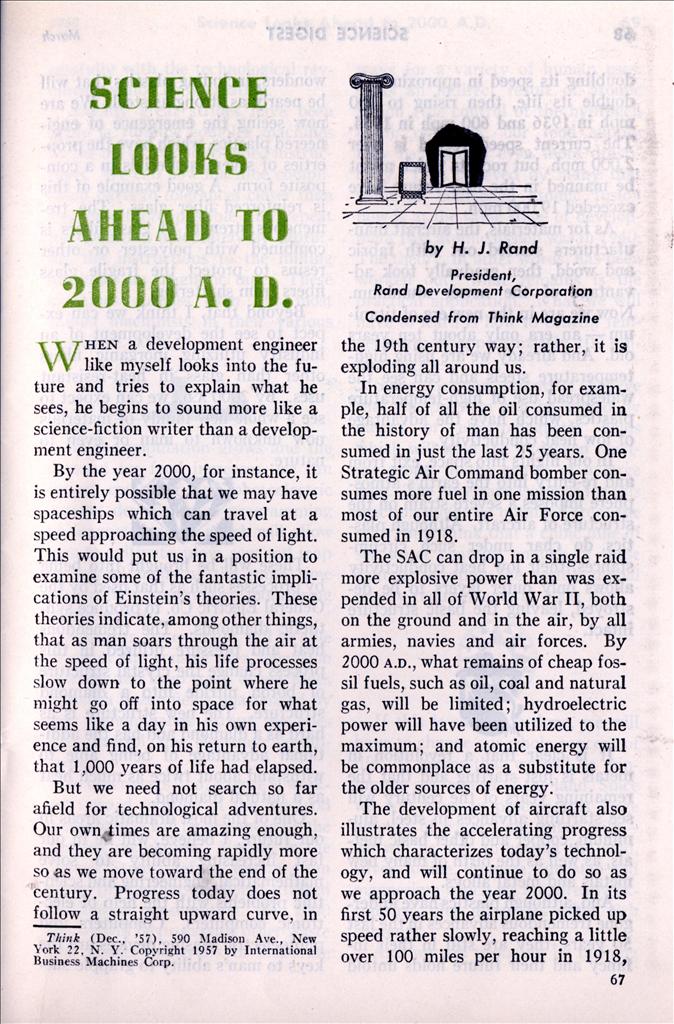 By the year 2000, for instance, it is entirely possible that we may have spaceships which can travel at a speed approaching the speed of light. This would put us in a position to examine some of the fantastic implications of Einstein’s theories. These theories indicate, among other things, that as man soars through the air at the speed of light, his life processes slow down to the point where he might go off into space for what seems like a day in his own experience and find, on his return to earth, that 1,000 years of life had elapsed.

But we need not search so far afield for technological adventures. Our own times are amazing enough, and they are becoming rapidly more so as we move toward the end of the century. Progress today does not follow a straight upward curve, in the 19th century way; rather, it is exploding all around us.

In energy consumption, for example, half of all the oil consumed in the history of man has been consumed in just the last 25 years. One Strategic Air Command bomber consumes more fuel in one mission than most of our entire Air Force consumed in 1918.

The SAC can drop in a single raid more explosive power than was expended in all of World War II, both on the ground and in the air, by all armies, navies and air forces. By 2000 A.D., what remains of cheap fossil fuels, such as oil, coal and natural gas, will be limited; hydroelectric power will have been utilized to the maximum; and atomic energy will be commonplace as a substitute for the older sources of energy!

The development of aircraft also illustrates the accelerating progress which characterizes today’s technology, and will continue to do so as we approach the year 2000. In its first 50 years the airplane picked up speed rather slowly, reaching a little over 100 miles per hour in 1918, doubling its speed in approximately double its life, then rising to 300 mph in 1936 and 600 mph in 1954. The current speed record is over 2,000 mph, but rockets which might be manned in the near future have exceeded 19,000 mph.

As for materials, the aircraft manufacturers started out with fabric and wood, then gradually took advantage of the newer aluminum. Now we are in the new era of titanium — an era only about ten years old. And already we are using high-temperature steels and can see the widespread use of high-temperature plastics, which have the advantage of low heat conductivity.

In our flights into space, exit from and re-entry into the earth’s atmosphere imposes a severe strain on the structure of aircraft. Although plastics do char under such circumstances, their low heat conductivity allows only outer layers to be destroyed, leaving the basic structure intact.

It is clear that a revolution in metals is just starting and that the remaining years of the century will see startling advances in steel, aluminum, copper and other basic metals, as well as the birth of many new metals and metal alloys.

And, although plastics have undergone tremendous advances in the last 50 years, they are still in their infancy and their future holds untold wonders, including plastics that will be nearly as strong as steel. We are now seeing the emergence of engineered plastics, which have the properties of several materials in a com- «, posite form. A good example of this is reinforced fiber glass. The tremendous strength of glass fibers is combined with polyester or other resins to protect the fragile glass fibers from shattering.

These will be brought into being by processes such as that«used by the General Electric Co. to produce synthetic diamonds. The tremendous heat and pressure utilized in this process change the crystal structure of boron nitride into a diamond structure. The new structure is as hard as a diamond and has the additional advantage of being able to withstand about twice as much heat as a natural diamond.

One of the most dramatic areas in our future, I believe, will lie in our fast increasing ability to solve mathematical, engineering and scientific problems with the help of electronic computers. Computers and photoelectric sensing devices are the keys to man’s ability to grapple sue- the sea as well, growing foods that are not even thought of now, such as unicellular animals and plants. This would make available adequate food for our expanding population for at least a century.

We are all aware of the great strides that have been taken in chemistry since 1900. Our great chemical plants produce compounds which seem like sheer magic. Our ability to construct such new materials as nylon is impressive. But the chemical industry’s advances in the next 40 years will make those of the last 40 look quite ordinary. The sea will be turned into hundreds of valuable chemicals as the air now is. New fibers, new finishes, new materials of all kinds will come from the laboratories, affecting everything we eat, wear and use.

In manufacturing, as we look back to 1900, we see an enormous increase in investment in tools to increase the productivity of workers. The investment which we now make can be ex- pected to increase heavily by 2000 A.D. We can expect that the investment per worker in automatic tools will increase at an astronomical rate.

Our forms of transportation are more difficult to predict. Since 1900 we have been building up an enormous problem in traffic control. It is my belief that most of the long-range transportation of goods and materials in the year 2000 will be done by unmanned space vehicles automatically and safely controlled from origin to destination along predetermined and non-interfering spaceways.

There is one prediction which, for better or for worse, seems certain to hold for the year 2000. Children born now will have reached the age of 43; they will look about the same and act about the same as people do now; they will have powers over nature undreamed of today, but their power over themselves and their fellow men will present about the same problems they do today.