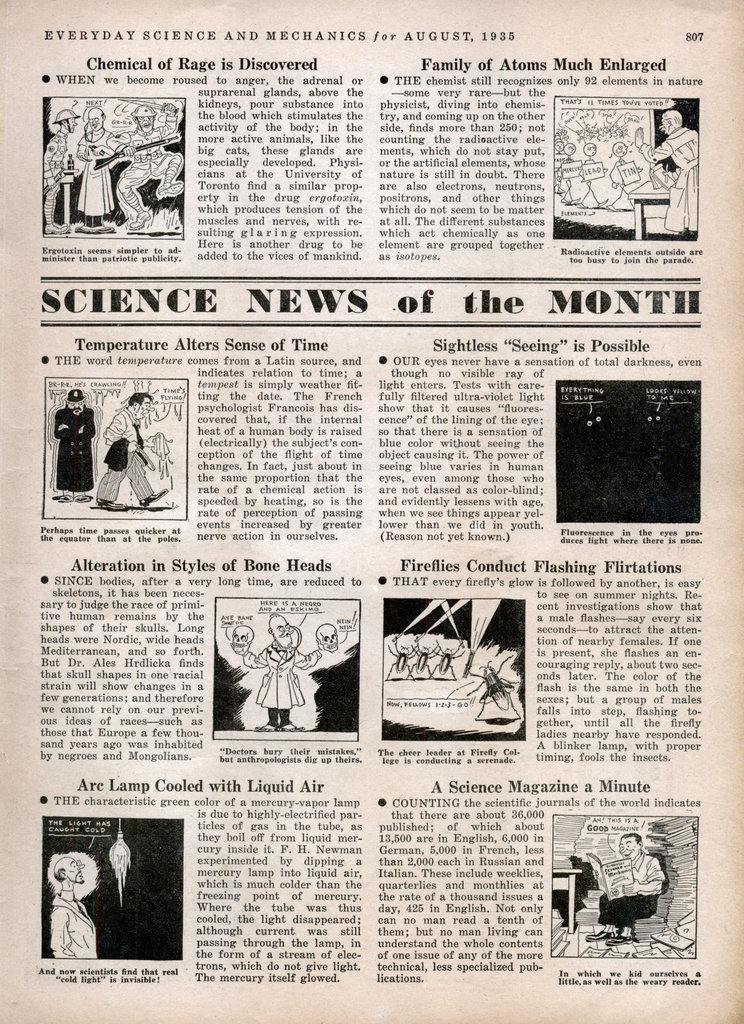 SCIENCE NEWS of is MONTH

Chemical of Rage is Discovered.

WHEN we become roused to anger, the adrenal or suprarenal glands, above the kidneys, pour substance into the blood which stimulates the activity of the body; in the more active animals, like the big cats, these glands are especially developed. Physicians at the University of Toronto find a similar property in the drug ergotoxin, which produces tension of the muscles and nerves, with resulting glaring expression. Here is another drug to be added to the vices of mankind.

Family of Atoms Much Enlarged.

• THE chemist still recognizes only 92 elements in nature —some very rare—but the physicist, diving into chemistry, and coming up on the other side, finds more than 250; not counting the radioactive elements, which do not stay put, or the artificial elements, whose nature is still in doubt. There are also electrons, neutrons, positrons, and other things which do not seem to be matter at all. The different substances which act chemically as one element are grouped together as isotopes.

• THE word temperature comes from a Latin source, and indicates relation to time; a tempest is simply weather fitting the date. The French psychologist Francois has discovered that, if the internal heat of a human body is raised (electrically) the subject’s conception of the flight of time changes. In fact, just about in the same proportion that the rate of a chemical action is speeded by heating, so is the rate of perception of passing events increased by greater nerve action in ourselves.

Alteration in Styles of Bone Heads.

• SINCE bodies, after a very long time, are reduced to skeletons, it has been necessary to judge the race of primitive human remains by the shapes of their skulls. Long heads were Nordic, wide heads Mediterranean, and so forth. But Dr. Ales Hrdlicka finds that skull shapes in one racial strain will show changes in a few generations; and therefore we cannot rely on our previous ideas of races—such as those that Europe a few thousand years ago was inhabited by negroes and Mongolians.

• THE characteristic green color of a mercury-vapor lamp is due to highly-electrified particles of gas in the tube, as they boil off from liquid mercury inside it. F. H. Newman experimented by dipping a mercury lamp into liquid air, which is much colder than the freezing point of mercury. Where the tube was thus cooled, the light disappeared; although current was still passing through the lamp, in the form of a stream of electrons, which do not give light. The mercury itself glowed.

• OUR eyes never have a sensation of total darkness, even though no visible ray of light enters. Tests with carefully filtered ultra-violet light show that it causes “fluorescence” of the lining of the eye; so that there is a sensation of blue color without seeing the object causing it. The power of seeing blue varies in human eyes, even among those who are not classed as color-blind; and evidently lessens with age, when we see things appear yellower than we did in youth. (Reason not yet known.) Fireflies Conduct Flashing Flirtations.

• THAT every firefly’s glow is followed by another, is easy to see on summer nights. Recent investigations show that a male flashes—say every six seconds—to attract the attention of nearby females. If one is present, she flashes an encouraging reply, about two seconds later. The color of the flash is the same in both the sexes; but a group of males falls into step, flashing together, until all the firefly ladies nearby have responded. A blinker lamp, with proper timing, fools the insects.

A Science Magazine a Minute.

• COUNTING the scientific journals of the world indicates that there are about 36,000 published; of which about 13,500 are in English, 6,000 in German, 5,000 in French, less than 2,000 each in Russian and Italian. These include weeklies, quarterlies and monthlies at the rate of a thousand issues a day, 425 in English. Not only can no man read a tenth of them; but no man living can understand the whole contents of one issue of any of the more technical, less specialized publications.