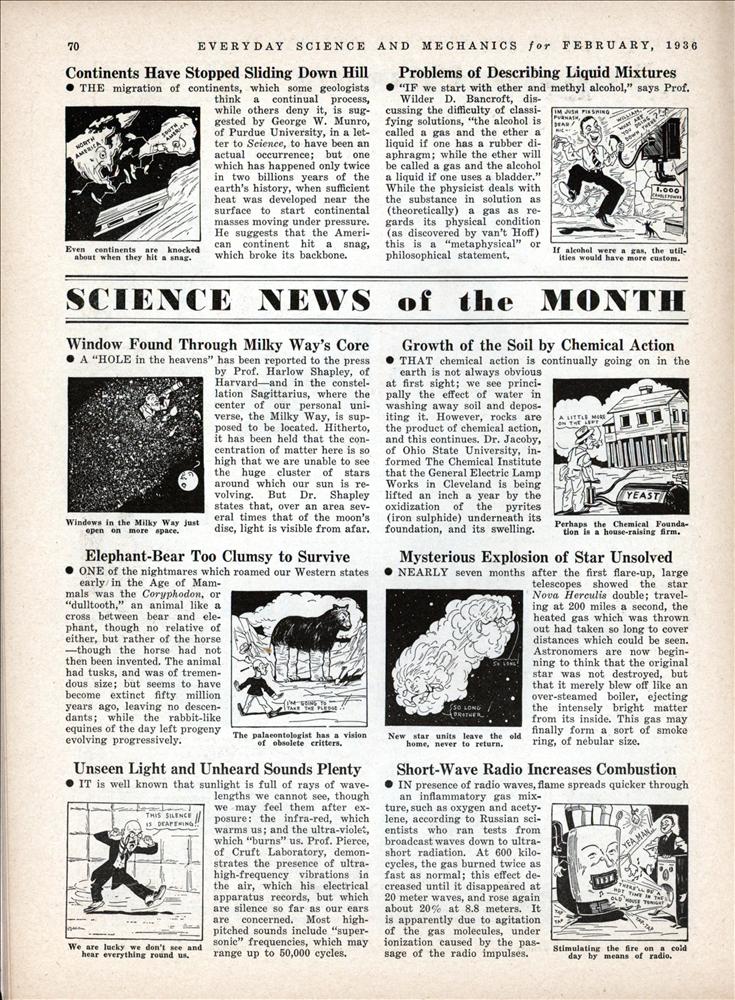 Window Found Through Milky Way’s Core
• A “HOLE in the heavens” has been reported to the press by Prof. Harlow Shapley, of Harvard—and in the constellation Sagittarius, where the center of our personal universe, the Milky Way, is supposed to be located. Hitherto, it has been held that the concentration of matter here is so high that we are unable to see the huge cluster of stars around which our sun is revolving. But Dr. Shapley states that, over an area several times that of the moon’s disc, light is visible from afar.

Elephant-Bear Too Clumsy to Survive
• ONE of the nightmares which roamed our Western states early in the Age of Mammals was the Coryphodon, or “dulltooth,” an animal like a cross between bear and elephant, though no relative of either, but rather of the horse —though the horse had not then been invented. The animal had tusks, and was of tremendous size; but seems to have become extinct fifty million years ago, leaving no descendants; while the rabbit-like equines of the day left progeny evolving progressively.

Unseen Light and Unheard Sounds Plenty
• IT is well known that sunlight is full of rays of wavelengths we cannot see, though we may feel them after exposure: the infra-red, which warms us; and the ultra-violet, which “burns” us. Prof. Pierce, of Cruft Laboratory, demonstrates the presence of ultra-high-frequency vibrations in the air, which his electrical apparatus records, but which are silence so far as our ears are concerned. Most high-pitched sounds include “supersonic” frequencies, which may range up to 50,000 cycles.

Problems of Describing Liquid Mixtures
• “IF we start with ether and methyl alcohol,” says Prof.Wilder D. Bancroft, discussing the difficulty of classifying solutions, “the alcohol is called a gas and the ether a liquid if one has a rubber diaphragm; while the ether will be called a gas and the alcohol a liquid if one uses a bladder.” While the physicist deals with the substance in solution as (theoretically) a gas as regards its physical condition (as discovered by van’t Hoff) this is a “metaphysical” or philosophical statement.

Growth of the Soil by Chemical Action
• THAT chemical action is continually going on in the earth is not always obvious at first sight; we see principally the effect of water in washing away soil and depositing it. However, rocks are the product of chemical action, and this continues. Dr. Jacoby, of Ohio State University, informed The Chemical Institute that the General Electric Lamp Works in Cleveland is being lifted an inch a year by the oxidization of the pyrites (iron sulphide) underneath its foundation, and its swelling.

Mysterious Explosion of Star Unsolved
• NEARLY seven months after the first flare-up, large telescopes showed the star Nova, Herculis double; traveling at 200 miles a second, the heated gas which was thrown out had taken so long to cover distances which could be seen. Astronomers are now beginning to think that the original star was not destroyed, but that it merely blew off like an over-steamed boiler, ejecting the intensely bright matter from its inside. This gas may finally form a sort of smoke ring, of nebular size.

Short-Wave Radio Increases Combustion
• IN presence of radio waves, flame spreads quicker through an inflammatory gas mixture, such as oxygen and acetylene, according to Russian scientists who ran tests from broadcast waves down to ultrashort radiation. At 600 kilocycles, the gas burned twice as fast as normal; this effect decreased until it disappeared at 20 meter waves, and rose again about 20% at 8.8 meters. It is apparently due to agitation of the gas molecules, under ionization caused by the passage of the radio impulses.